In Minnesota the Habs played well and were undone by bad coaching decisions. In Colorado, it was a garbage fire on skates, and painful to watch.

Share All sharing options for: Canadiens vs Avalanche - Game Recap - Feeling the defeat

Last season, the Montreal Canadiens lost 14 times in regulation through 48 games. It took 32 games to lose 7 in regulation. This year they've lost 7 of their first 15. To match last year's mark through 48 games, Montreal would need to go 21-7-5 over the next 33 games. That's a 71.2% winning percentage. Keep in mind, that last season the Canadiens still barely won the Northeast Division. Getting home ice in the playoffs is the goal of the regular season, and the Habs have already put themselves in a hole to do so.

15 games of 82 doesn't seem like much, but the standings don't actually fluctuate as much as you'd imagine after the first month of the season.

How bad was tonight's performance? In one night, the Canadiens dropped from 8th in the league in Fenwick close percentage to 15th, right above the team that just handed them their asses in Colorado, Montreal's first loss by more than one goal in this young season.

But that is largely due to Montreal getting bewilderingly excellent goaltending from Carey Price and Peter Budaj, because there has been an obvious collapse in play since game six, which you can see in the team's cumulative Fenwick close percentage: 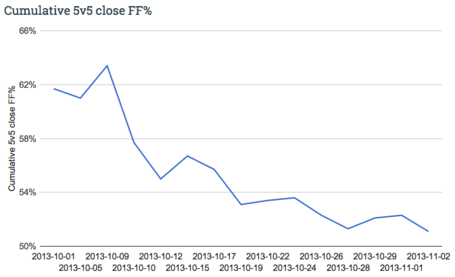 The drop has been severe, and the bounce backs keep getting smaller. Illustrated another way, here's Montreal's game by game Fenwick close percentage: 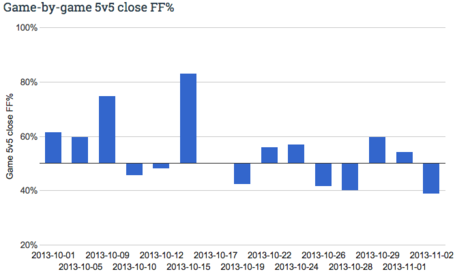 After starting the season on fire, Montreal has been treading water at best for nine games, with positive possession numbers in only four of those.

The precipitous drop looks very similar to the 2011-12 Canadiens under Jacques Martin, who imploded after key injuries to Brian Gionta and others, with Andrei Markov already sidelined. They're dealing with injuries early this season as well, but the team is far deeper, and the injuries aren't really to key guys, aside from Max Pacioretty. And Pacioretty was back last night. Something is going on here that isn't positive.

Speaking of not being positive, Michel Therrien continued last night to rip P.K. Subban. If he had been talking only of Ryan O'Reilly's goal, Subban would totally deserve a ripping. He made a mistake, and it directly caused a goal against. However that's an extremely rare event, and he also created the only goal of the game, and three of the four goals the Canadiens scored on this road trip.

Therrien didn't just blame him for the one goal though, as he said that Subban caused two of the three goals against, one of which being a gigantic rebound into the slot that he could have intercepted if he got lucky, but to put the blame on him and only him in that situation is a continuation of Therrien's hatchet job on Subban that's gone on since he was hired.

But that's a whole article in and of itself, let's get back to the game.

Subban wasn't the only player to get pilloried by the coach after the loss, as it seems that the futility that is David Desharnais has finally hit a breaking point.

Therrien: What Desharnais gives us since the beginning of season is not enough. He puts us in a position where we have to make a decision.

I don't know about you, but to me, it sounds like the clock is ticking on Desharnais' time in a Habs jersey. And the downward spiral hasn't just been this season. Desharnais has just 1 point in 15 games this season, but in the 41 games he's played since signing his new 4 year contract, he has just 14 points, and a lowly 46 shots.

Therrien gave Desharnais Rene Bourque and Max Pacioretty as linemates to begin the game, but that experimented didn't last long, as Desharnais was eventually benched and Alex Galchenyuk was moved to center. Therrien commented after the game that he liked what he saw from Galchenyuk there, saying it was something he'd like to repeat. Tomas Plekanec and Lars Eller are entrenched at center now, which means that thin ice Desharnais was skating on just started cracking.

I don't believe that Desharnais has been the cause of this downswing, in a few of these games I've actually thought that he's played well. However even though he's not causing losses, he sure hasn't been a factor in any wins.

Looking back on the game and rewatching some sections of it, I was struck by the fact that many players had very obvious strong points during the game. But only Brendan Gallagher had a good game. One of 18 skaters having a good game isn't going to cut it, especially against the hottest team in the NHL.

The Colorado Avalanche aren't the best team in the NHL, that distinction (for now) belongs to the San Jose Sharks, but there is more to them than rolling with the percentages, not that they aren't. What they're doing right now isn't sustainable, but that they're doing it deserves acknowledgement.

Patrick Roy has the Avs playing desperate very early, and that may result in an early burnout for a young team, but for now the results are spectacular. They're hard on the puck, fast, and give players no time to make decisions. In that respect, they looked like the Sharks did at the Bell Centre.

The dominant theme in the media for the next two days until the Habs play St. Louis is going to be whether or not passing on Patrick Roy as head coach was a mistake, and as much as I don't think it was, Michel Therrien doesn't look like the guy. Does anyone really believe he can lead this team to the Stanley Cup?

Fancy stats for the game from Extra Skater.

And don't forget to check out reaction from the winning side over at Mile High Hockey. They've always been nice when dropping in here, so behave yourselves.