Alexei Emelin returns to the lineup and the impact is an immediate change of fortunes. Coincidence? Nope.

Remember when the Canadiens were struggling? They've only just begun to start digging themselves out of the possession hole caused by their big run on injuries, but they've brought their record up to 4 games over .500 with a 5-1-1 streak.

How have they been able to do it? Carey Price has been a pretty big part of that. Price has played five of the seven games in the streak, and put up a sparkling .951 save percentage. His save percentage this year is sitting pretty at .935 after 19 starts, with an even strength save percentage of .947, third among starting goaltenders after Josh Harding and Tuukka Rask. Price has been everything and more than what anyone could expect.

Speaking of guys going above and beyond, P.K. Subban did a job on Sidney Crosby last night. Therrien recognizing that Alexei Emelin and Josh Gorges couldn't handle him early on was likely the deciding factor in the game, as Subban not only outplayed Crosby while the two were head to head, he hounded him all night. He and Tomas Plekanec got Crosby angry and off his game. It was an all-world performance on the second half of a back to back.

And you know what's scary about Subban? He's getting unlucky. His shooting percentage of 3.8% this year is about half of his career average coming into the season, and less than half of what he did last year. And it's not like he's not putting the puck on net, his 7.9 shots per 60 minutes (including PP time) is third amongst all defensemen behind Dan Boyle and Jason Garrison.

And if you watch, Subban has noticed that he's being checked extremely quickly at the point to avoid unleashing his one-timer, so he fakes and puts off-speed wrist shots on the net, or passes to Andrei Markov to set him up for a one-timer instead.

And then there's Max Pacioretty. We declared Pacioretty week on EOTP when he spoke to the media before the game against Minnesota, and he's obliged us with five goals and 18 shots in three games. Pacioretty took a shot at fans and media after the Wild game for the constant crying for him to go to the net, and he did it again Saturday night, noting that both his goals came from the perimeter. 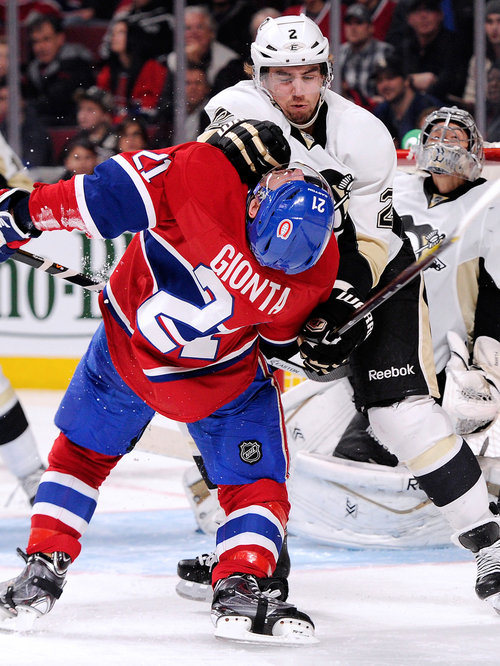 Not a penalty according to Pittsburgh play by play - Photo credit: Getty Images

Most fans and media don't seem to understand what Max Pacioretty is, which is kind of where this whole problem stems from. People want to see a Cam Neely clone crashing and banging because he's a big body, but that's not his game. Pacioretty has no trouble with the physical game, but his style is more Marian Hossa than Milan Lucic. He plays a 200-foot game, and he can score from places most players can't because of his elite release.

And I would be remiss if I didn't mention Brian Gionta, who was absolutely fantastic last night, even though he didn't get on the board. The amount of subtle little plays where Gionta won a puck battle, or kept a dead looking play alive, or forechecked like a demon was nigh uncountable.

The depth this team has when healthy makes such a difference, and we're seeing the dividends of having a healthy Emelin in the lineup over the last four games. Emelin hasn't been fantastic in tough minutes, in fact he's shown a lot of rust. However the gap between his play and the guy he replaced in the lineup can't be overstated.

His return to the lineup has allowed Diaz to move down to the third pairing, which means that no matter what, there's always a top-4 quality defenseman on the ice for the Habs. During the last three games, the Habs have hit the net 15 times while Diaz is on the ice, and allowed just eight shots. Not too shabby.

Imagine how good this team will be when they finally realize that Nathan Beaulieu is better than Francis Bouillon.