Which Habs are getting the puck to the net effectively? Which ones are keeping the puck away from their own net? Let's take a look after 20 games at what we're dealing with.

Thanks to our own Olivier Bouchard, we have scoring chances tracked for the Montreal Canadiens. I explained last month when I looked at the first 10 games of the season what a scoring chance was, so check that out and see who was good and who wasn't, then we'll get on to the 20 game mark.

The top table is only even strength, while the bottom is special teams. Here are the totals after 20 games: 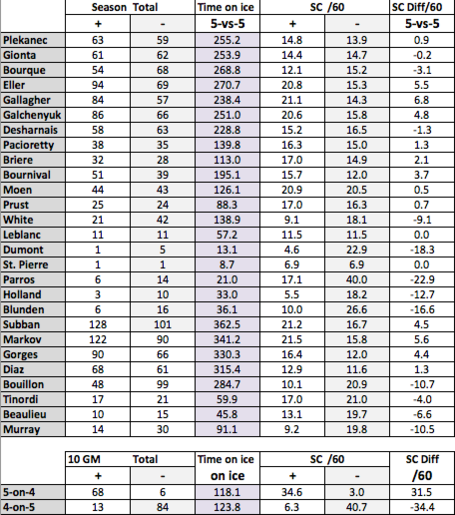 A few things can be seen here, but the most notable thing to my eyes is that the top three defensemen on the Habs have been very good. Andrei Markov has been the second best player by scoring chances on the entire team, but P.K. Subban and Josh Gorges are right there with him. Then there's a gap between Gorges and Raphael Diaz, and a chasm between Diaz and the rest of the available defensemen.

Francis Bouillon has been a disaster all season, but even with how he's played it's shocking to see that he's been even worse than Douglas Murray from this perspective. We don't need to worry about Murray as much now that Alexei Emelin is back, but Bouillon may be in competition with him for worst defenseman in the league. At this point I don't see how Jarred Tinordi or Nathan Beaulieu could be worse on Emelin's left side.

Also of note is that while George Parros was on the ice, the Canadiens gave up more than twice as many chances against as when any other NHL regular was on instead. Over double!

The rest of what you see is very much confirmed by the eye test, meaning that the kid line of Lars Eller, Brendan Gallagher, and Alex Galchenyuk have been the driving force offensively, while Tomas Plekanec, Max Pacioretty, Brian Gionta, Danny Briere, and David Desharnais have been holding even for the most part.

Rene Bourque seems to be the worst even strength generator of offense among the top 11 or so Habs forwards, yet he gets more even strength ice time than any other forward. Figure that one out.

The special teams have gotta significantly better than the first 10 games, but they're still below water there as well.

Since we looked at the previous 10 games in isolation, I'd like to do that as well here instead of only assessing the cumulative numbers.

There are some really interesting coaching decisions in this 10 game data set, and we'll start out with ice time. The most used forward over the last 10 games was still Rene Bourque, even though he was objectively the worst top-9 forward in that timeframe. Lars Eller's line and Michael Bournival's ice time both went up, but they're still behind Plekanec's line over this time period.

The most shocking thing though? Galchenyuk is still getting less even strength ice time per game than David Desharnais. Even with how excruciatingly bad Desharnais has been.

Subban, Markov, Diaz, and Bouillon's ice time increased, while Gorges stayed steady. Why did this happen? Because Michel Therrien trusted Nathan Beaulieu and Jarred Tinordi at even strength more than Douglas Murray, so he was benched frequently in favour of increasing the other players' ice time.

This raises a few questions, like why if Murray is so awful was he not waived in favour of a Bulldog? Or, why is it that Therrien can recognize that Murray is terrible, but can't see that Bouillon has been equally bad?

Subban has brought down his risk level by nearly 5 scoring chances per 60 minutes since the first 10 games, which is good, but he's still allowing more per minute than last year, which I'm sure he'll continue to improve on.

Diaz slipped into the negatives in tough minutes over the last 10 games, which means that Emelin's return couldn't have possibly come at a better time. If the Habs could manage to get past their Bouillon crush and ice a legitimate NHL defenseman as their 6th guy, they'll have three good to great pairings.

But how much did the special teams improve?

The special teams have improved by leaps and bounds since the last time we broke this down, and that's more than anything to do with the penalty kill. Montreal has managed to shave of 19 scoring chances against per 60 while a man down, though they've lost a bit of the offense that they had earlier in the season.

They're not quite as good as they were under Jacques Martin, but we'll chalk that up to not having P.K. Subban on the unit. And if not playing Subban 2 minutes a night on the penalty kill means he plays 4 more minutes at even strength or on the powerplay, that might actually be worth it.