While the Canadiens have started the season as a dominating force at even strength, the power play, at least at 5-on-4, has left something to be desired. How can it be fixed?

Share All sharing options for: Breaking down film - the Canadiens' power play and the argument for the 1-3-1

The Canadiens on Saturday dominated the Flyers in just about every facet of the game. If you didn't believe it before, well, they just fired their coach after three games, so there. But once again the Canadiens wasted chance after chance at 5-on-4, only finally putting one in the net with the game all but over off a broken play. The Habs are 2-13 on the man advantage so far this year, and considering the personnel, that's just not good enough. So what can be done?

One of the issues I have noted with the power play thus far is that it hasn't made keeping possession of the puck a priority. Michel Therrien & Co. are lucky to be blessed with a talented team that can make long stretch passes and thread the needle every once in a while for an extravagant one-timer, but that talent is wasted, or at least not put to best use, when it is used in a sloppy manner where the players are guessing and there isn't a set plan. For example, here is Andrei Markov receiving the puck by the boards against Philadelphia on Saturday. 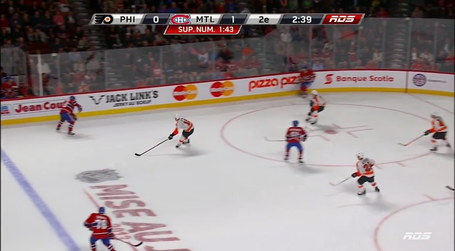 This is early in the power play, and nobody is particularly set up. It's possible that it's a set play, but it seems sporadic. Instead of getting the unit set up properly, Markov shoots the puck past David Desharnais to Rene Bourque at the bottom of the opposing circle, hoping for a tip. The issue is that Bourque is skating towards the puck and is at least five feet away from goal, making the tip a low percentage play. As could be expected, the tip attempt fails, and the Flyers retrieve the puck and clear the zone. Now here's P.K. Subban only seconds later at the point. 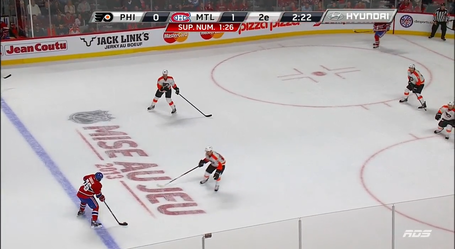 You can't tell from this picture, but Subban has the option of passing to Markov on the left and down to Briere, or to do the same to his right. Instead, he attempts the low-percentage cross-ice pass himself. The puck ends up tipping off the stick of the Maxime Talbot, and they are able to clear. 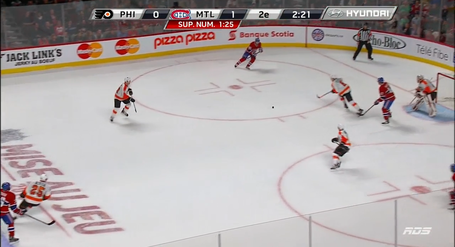 The biggest issue isn't necessarily taking a risk. As I said in the last post, one of the great catalysts of the Canadiens' offense is the willingness to take chances by cheating on the rush, pinching, and keeping three attackers in deep. But it's important to make calculated risks, and even if this pass had gotten through, it's likely that Braydon Coburn would have had the passing lane covered and Briere would have had to regroup. 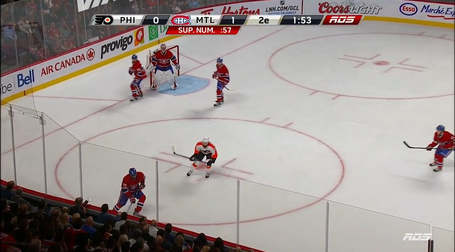 This is Subban again near the end of the same sequence. Matt Read has just been given a good chance on net after a turnover by Briere, and with nobody in particularly good position to break out, the Norris Trophy winner would be wise to simply chip the puck back into the corner and waste a few seconds, but ensure that everybody is on the same page. 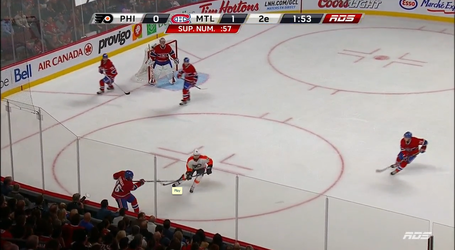 Instead, he forces a quick and hard pass to Gallagher, who doesn't even come close to handling it (the pass actually goes behind him) and ricochets into the neutral zone where the Flyers can once again gain possession. Even if this ill-advised pass to - or more accurately shot at - Gallagher and gone through, he still wouldn't have much support with three of his teammates behind him, and he may have had to regroup anyway. Subban essentially risked giving up the puck for nothing.

The 1-3-1 power play formation is a fairly new development that was popularized by the New Jersey Devils during their run to the Stanley Cup Finals in 2012. It was centered around their then-superstar Ilya Kovalchuk. The assistant coach who ran that unit, Adam Oates, brought it with him when he became head bench boss for the Washington Capitals, and last year the Caps had the NHL's best power play, clicking at 27.2%. This year they've scored on an unsustainable but impressive 66.7% of their opportunities. Teams like the Canucks and the Penguins dabbled with the formation prior to Oates' success, and since then other have adopted it full time, the Leafs being one example.

Well, on the surface it's exactly what it sounds like. The set-up involves one anchor at the point, three men across the middle, and a guy in front of the net or below the goal line, depending on the situation. In many ways, the 1-3-1 is like hockey's version of the Tiki-Taka system that made Pep Guardiola's Barcelona one of the greatest soccer teams of all time. It revolves around quick, short passes, and creating triangles. In doing so, there are always numerous avenues that one can go with the puck, and it means that the penalty killers have to maintain a condensed box formation in order to attempt to cover them all. The key difference between this and the popular umbrella formation is having a player standing in the slot at all times rather than having two near the goal line. There have been moments this year when the Canadiens have set up in a 1-3-1 temporarily, but invariably the setup has reverted to more of an overload or an umbrella (see pictures below). 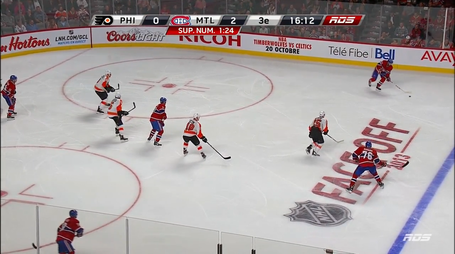 The Canadiens set up in a modified 1-3-1, but don't advantage of it with the locations of the players and Markov's failure to carry the puck lower. 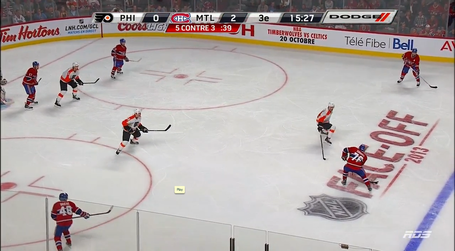 The Canadiens set up in their preferred umbrella, giving the Flyers the chance to pressure high without the danger of a slot man.

To read a more detailed look at the 1-3-1, check out this fantastic piece from last year by Japers' Rink.

So how would a 1-3-1 power play work for Montreal? And do the Canadiens have the appropriate personnel? Let's take a look at the different roles and who could potentially fill them:

A) Right Side Half-Board Player

This player is often used as the quarterback, although technically the play can start from either side. It's important that this player is a left-handed shot to set up potential one-timers, that he's a decent stick-handler, has good vision, and is comfortable with the puck on his blade shifting forwards and backwards to attempt to open up passing lanes. The Capitals, for example, use Nicklas Backstrom here. For me, the Canadiens have two perfect players for this role, both of whom have shown on the power play so far their ability to do all of these things, and be enough of a shooting threat that the focus isn't solely on the opposite point.

B) Left Side Half-Board Player

if your right-side player is your handler, then the left-side guy should be your trigger man. He should be great at one-timers, but have the ability to thread a pass after drawing attention to himself should the shooting lane not open up. He obviously needs to be a right-handed shot for the same reason mentioned above. He can also quarterback the play at times. For the Capitals this player is Alex Ovechkin, and they score the largest portion of their man advantage goals on one-timers from him. It's not hard to figure out who this player should be, at least on the first unit, for the Canadiens. Here are a couple of the ways this player could score:

One of the great aspects of the 1-3-1 is that the shot can truly come from anywhere. If the defense focusses too much on one of the half-boards players (as teams often do with Ovechkin), then the point man can let one rip (as Mike Green generally does) and make them pay. This player, however, needs to be incredibly defensively responsible. The biggest downside and risk to the 1-3-1 is the fact that with only one true point-man on the ice, a give-away similar to the one Andrei Markov committed against Tyler Bozak will almost invariably end up in a breakaway. Interestingly, Therrien has favoured Subban in this role when the formation has briefly been used, but I think Subban is better to draw attention away to one side, and Markov is no slouch when it comes to slapshots either. The biggest issue here might be what to do about the second unit. Do we really trust Raphael Diaz as a lone defender? Certainly not Francis Bouillon. The solution might be to double-shift a Subban or Markov, but short of that the 1-3-1 for the second unit might be too risky of a proposition. Either way...

This guy is the difference-maker when it comes to the 1-3-1. He will likely see the least touches of anybody on the ice, as more than half of his job is to serve as a decoy and to keep the defense honest. That said, if the passing lane does open up, he must be ready to provide a one-timer when the pass comes from his strong-side wing or a tip when it comes from his weak-side. This player should also be good at creating space and finding openings in coverage. Therrien used Bourque in the formation here on Saturday, but likely the best fit wasn't playing. Here is the type of goal a slot player could end up scoring.

This players serves mostly the same role as in any other formation. His job is to screen the goalie and pounce on rebounds. When the puck comes out to the quarterback, in this case the right-side half-boards player, he shifts into position on the goal-line to receiver a pass. From there, he has the ability to thread passes to the slot man, to the far side boards man (who will have snuck in closer), back to the quarterback, or he can even take the puck to the net himself. One of the keys to this power play is the ability to give and receive tape-to-tape crisp passes, something the Canadiens have struggled with somewhat. Watching the Capitals perform it, the passing is like a work of art. Attention to detail is key.

Unit 2: Brendan Gallagher (I could put David Desharnais here as well but after reviewing game tape his powerplay performance has been atrocious)

Conclusion: It's not the time to press the panic button on the Canadiens power play just yet. With Subban, Markov, and the skill the team has, it's unlikely they'll finish outside of the top 10 with the man advantage. But that's not to say they can't get better. With less forced plays, more controlled zone entries and passing, more attention to detail, and maybe even the adoption of a powerhouse formation that is slowly taking the league by storm, this could be a power play for the ages.