Hockey purists like to cite hits and blocked shots in their analysis, but those stats have significant flaws. Is there a way to make them more useful?

There are three major flaws when it comes to the majority of what the NHL calls "real time stats", in particular hits, blocked shots, and giveaways:

1. Poor teams are generally going to have more hits, more blocked shots, and fewer giveaways, because they will have the puck less

2. NHL officials - or the people who track these stats - tend to have wildly different ideas of what constitutes in particular a hit, but to a lesser extent also a blocked shot and a giveaway, meaning that the data can be unreliable

3. Even beyond that, there hasn't been any statistical data (or definitive argument) that any of these stats are a good determinant of a winning team

The San Jose Sharks are currently last in the league in hits; the Chicago Blackhawks occupied the same rank last year.

After seeing Don Cherry's rant about +/- and his constant preaching of hits and blocked shots, combined with the ongoing debate about Douglas Murray's worth and performance, I decided to see if I could get rid of at least one, if not two of the flaws in these stats, and to find out if they can tell us anything.

First, I looked at blocked shots. Predictably, the biggest issue with the stat is that teams that spend a lot of time in their own end are going to block more shots than not. That said, we know that John Tortorella is going to have his team block more shots than, say, Adam Oates, so I was interested to see how the stat would change if we accounted for possession. As a result, I divided blocked shots by total corsi attempts against, to come up with a Blocked Shot Efficiency quotient (BkS E). Let's look at the results: 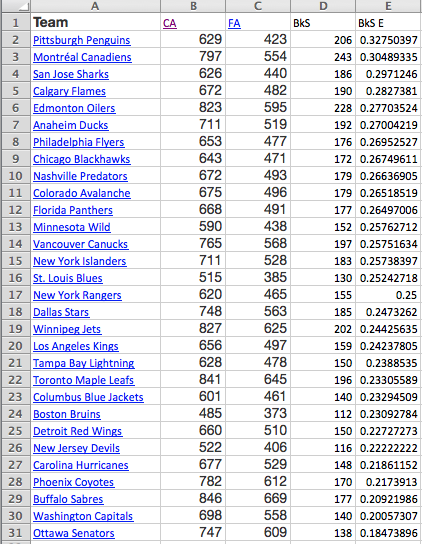 As you can see, the Penguins lead the NHL through approximately 1/8th of the season, blocking approximately 33% of the shot attempts towards their net. The Canadiens are in fact second, while John Tortorella's Canucks are 13th and Adam Oates' Capitals are down in 29th. There are good teams at both the top and bottom of this list, so it would be hard to argue that shot blocking is a critical component to winning over the long term, at least when compared to shot prevention.

Next, I looked at hitting. The additional difficulty when it comes to hitting is the definition of a hit can be skewed immensely building-by-building. As a result, I used only road data for this next part. The downside of this is that it takes a small sample and slices it in half, which is far from ideal, but it was a matter of picking bias or small sample, and I felt that this was the lesser of two evils. Hitting efficiency involves taking each team's number of hits per road game, and dividing it by each team's non-possession time. In mathematical terms, I divided hits/game by 1 - (Road Fenwick Close Percentage). Here are the results: 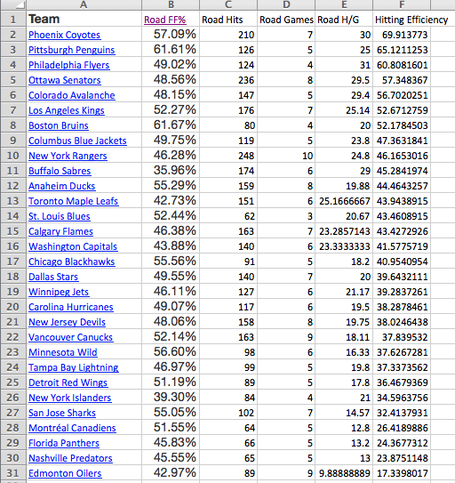 To clarify these numbers, Phoenix records just under 70 hits per 60 minutes of even-strength score-close play without the puck. It is interesting to note that Edmonton, which Bob McKenzie recently called the easiest team to play against in the NHL, is the worst in this category. Ultimately, this is a very small sample size, and more research would have to be done to draw any real conclusions. It does, however, significantly improve the idea of "Real Time Stats" from completely useless to only partially useless, so that's something.