Although they looked decent, the Canadiens made a few costly errors that cost them the first game of the season, in traditional fashion, to the Leafs. What did it look like when I reviewed the tape?

Share All sharing options for: Breaking Down Film - Game 1: Canadiens vs. Leafs

This is a series that, if time allows, I would like to do fairly consistently this year. EOTP already brings you tons of analysis based on what we see while watching the game live, and what we then find looking at the stat sheets after the game. But now, I want to go one step further and break down the tape to find where things went right, and where they went wrong. Keep in mind that I, for the brief time I played hockey, was a goalie, so my knowledge of schemes and tactics comes mostly from observation as well as hours and hours of reading. Feedback is always appreciated.

With that out of the way, let's look at two of the goals the Leafs scored last night, and what exactly went wrong. The first one I want to look at is Toronto's first goal, which was scored by James van Riemsdyk at 8:01 of the first period on a 5-on-3 powerplay.

The simple explanation for what went wrong is that the penalty kill messed up, and Price let one squeak through his reduced 5-hole to boot. But let's look into more specifically what happened that allowed van Riemsdyk to be so wide open at the corner of the crease. 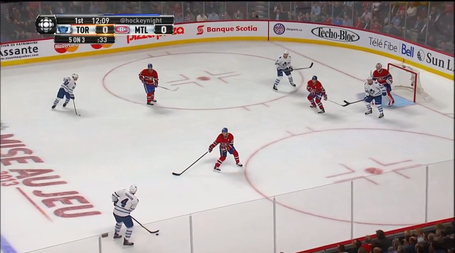 The play starts out alright. Toronto gains fairly easy entry into the zone, which is to be expected with a two-man advantage. They have Franson, Phaneuf, Kessel, Bozak, van Riemsdyk out there. Montreal counters with Prust, Gorges, Markov. Since Toronto likes to set up with two men on the point (much like Montreal), rather than an umbrella format, Montreal opts for the inverted pyramid in order to cover the two men at the point. Markov is designated to take the low men, and thus the passing lane. Here, Gorges covers the potential shot from Franson, while keeping his stick in the passing lane to Bozak. 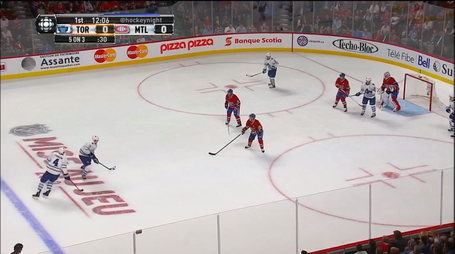 Franson passes D-to-D to Phaneuf, and they proceed to swap sides in order to give both defensemen the capability of a one-timer. We've seen maneuver frequently with Subban and Markov, since it's easier to carry the puck into the zone and stymie counter-rushes as a righty on the right, but you get a better angle shooting as a righty on the left (and the inverse for lefties). All still seems well from a Canadiens perspective. Gorges and Prust are communicating, and they swap men, sticking to their sides while Markov continues to cover the pass down low. 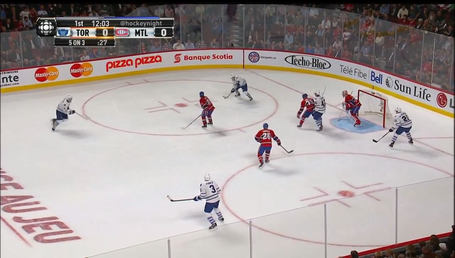 Franson gets the puck back and passes down low to Bozak, and this is where things begin to get complicated. Markov is still doing a decent job sealing off the passing lane to JvR, although he is no Hal Gill, and it is looking like if Bozak can physically manipulate him there might be an opening. Gorges sees this and tries to contribute by using his stick to block off a potential pass. He has to be careful not to leave Phaneuf open for a cross-ice one-timer, though. 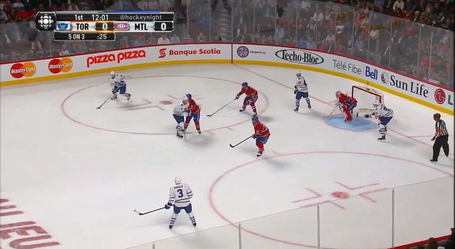 Now this is where the confusion happens. Toronto initiates what is likely a set play, having Kessel carry the puck back towards the blueline, and having Franson set what is essentially a pick on Brandon Prust. Normally what should happen in this situation is one of two things. Either the trio should rotate (Markov should follow Kessel, Prust should move over and take Franson, and Gorges should retreat towards the net) or the players should hold their positions (Prust should move over to take Kessel while Markov remains glued to the passing lane in front). As you can see here, Markov begins to follow Kessel, but the pick that Franson sets prevents Prust from getting over to cover his man, meaning that all three players are caught in no-man's land. Suddenly, Kessel has several great options. He can pass across to Phaneuf for a one-timer, that Gorges may not be able to get back and block. He can shoot through traffic, he can move to the top of the slot and pass back down low to Bozak. Or he can pass through the middle of the ice to van Riemsdyk for a tap in or a wide-open re-direct to Bozak. He takes the latter option. 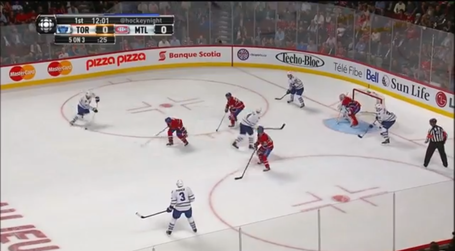 This is the moment that Kessel releases the pass. Note that there are three Leaf players closer to the net than any ONE Canadien. At this point, the coverage is completely blown, and the team has to hope that the pass somehow hits a stick, or that Price makes a miraculous play. Note that not even one passing lane is covered. Phaneuf, Bozak, and JvR are all open for a potential 1-2-goal. In the end, Kessel passes through the crowd to van Riemsdyk, who stuffs it in on a play that Price might want back, but that ultimately he can't be blamed for. 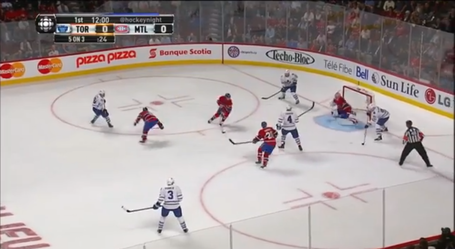 A lack of communication by the Habs combined with a great set play by the Leafs and good execution led to the opening goal.

Conclusion: there is a misconception that a good penalty kill requires big defensive defensemen who can sprawl out and cover a lot of ground. It is the reason why some liked the signing of Douglas Murray, despite the fact he has been one of the league's worst in that role in the past three years. I'd call it the "Hal Gill Effect". But the fact is, agile, quick, and energetic players can do the job just as well if not better. Take a look at this Rangers 3-on-5 penalty kill from last year against the Flyers.

Fittingly, this features current Hab Daniel Briere against former Habs Jeff Halpern and (ish) Ryan McDonagh. Note how quickly the Rangers pressure the puck at every opportunity, and that even when the Flyers rotate and the Rangers find themselves scrambling, each player knows his role and is able to recover in time. Most importantly, note how active Girardi and McDonagh are when serving as the low man. They are constantly down on their knees to block the pass and then springing back up again to get in position. It is that type of thing (as well as being able to win battles and clear the puck) that Subban was able to do so effectively while he was one of the best penalty killers in the 2011-2012 season, and it is what guys like Markov just aren't young and agile enough to do. There's a question as to how to maximize Subban's 25 to 27 minutes per game, but I still think it's undeniable he should be on the first PK unit.

Now let's look at Toronto's fourth goal of the game, which was scored on a two-on-one by Mason Raymond. First, check out the video.

So this was a fairly unlucky goal on the surface. The puck bounced off of Bouillon's skate and back to Raymond, who had an easy tap-in which Price could do absolutely nothing about. But how did this odd-man rush start? How much is Bouillon to blame? Let's break it down second by second. 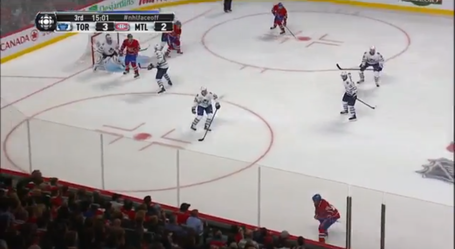 The play essentially starts here. The Canadiens have their EGG line on the ice (Eller-Gallagher-Galchenyuk) with Diaz and Bouillon at the points. The Leafs counter with Bolland, Raymond, Bodie, Franson and Ranger. One of the great things about Michel Therrien since he took over has been his willingness to allow his players to take risks and play offensively. Occasionally, like at times in the playoffs last year, it has cost the team defensively, as young players like Galchenyuk and Gallagher, and not-so-young players like Desharnais have been caught too far up ice and have been unable to get back. You have to take the bad with the good, and that's what you see here. Generally, you always want to have one of your forwards (say F3) a little bit higher in the offensive zone, in case there is turnover and they need to retreat. Up until this point in the play, F3 is Galchenyuk. What happens, however, is that the Leafs all turn towards Bouillon and lose sight of the young winger. What he does alertly, therefore, is to take a risk and cheat down low, giving Bouillon an open pass that should amount to a good scoring chance. 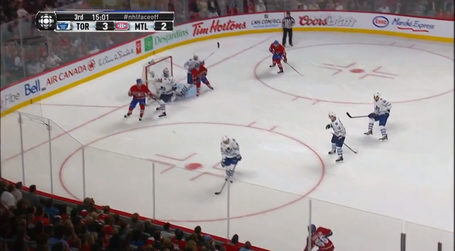 The problem, however, is that Francis Bouillon isn't Andrei Markov. He's not an offensive mastermind by any means. Bouillon is a semi-reliable bottom-pairing defenseman with a lot of heart. This current Canadiens team is packed with talent, but unfortunately at times like this Bouillon's lack of offensive awareness can hurt the team. It's like an author has a stream of incredible ideas, but his fingers, doing the typing, can't keep up with his brain. Bouillon is the fingers. Galchenyuk is the brain. Anyway, Bouillon instead shoots wide short side, and the puck ricochets out the other side. Chuckie's momentum is already carrying him towards the net, and F1 and F2 are both deep in the zone. It is up to Diaz to get the puck back in deep and quell the danger. 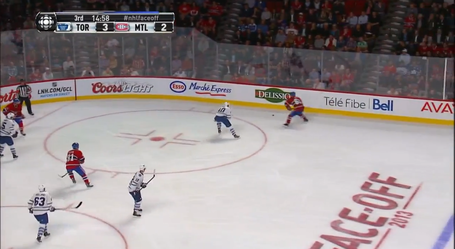 What Diaz really should do here, recognizing the danger of having three forwards down low and Bouillon all the way at the other end of the zone, is simply chip the puck back in deep to Galchenyuk. Instead, he tries to find Eller for the tip-in, and ends up finding Brodie's skate. This series of brain cramps leads to the 2-on-1. And Bouillon has to get back quickly. 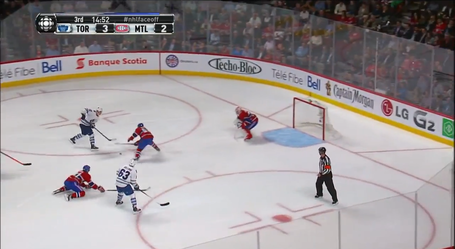 First of all, it's important to point out how great of a defensive effort this was from Lars Eller. Last we saw, he was fairly deep in the zone with his momentum carrying him away from the puck. But Eller used his speed and some great hustle to actually just about catch Bolland. It's quite likely that even if the pass had got through, the Danish sensation would have managed to deflect it away. Anyway, Bouillon here makes another pretty glaring mistake. Different coaches have different ideologies on how to play a 2-on-1 as a defenseman, but it generally involves either taking the pass (often by lying in the passing lane) or stick-checking and pressuring the shooter. It seems as though Bouillon opts for the second, likely because he sees Eller coming in and figures it's he has support. Unfortunately, instead a stickcheck or a bodycheck, he kind of lunges horizontally at Raymond, which as you can see the new Leafs' signing is easily able to anticipate and get the puck off. You have to give some credit to Bouillon for getting a skate on the puck, but a vertical slide likely would have resulted in the puck bouncing into the corner, rather than right back to Raymond, so take that with a grain of salt. 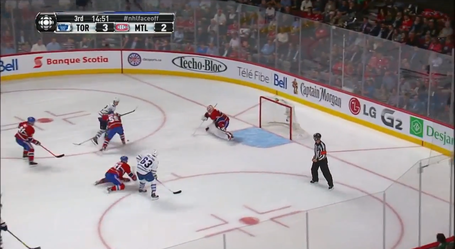 Obviously, the puck bounces back to Raymond and Price is left with no chance on this one. Bouillon makes a couple of mistakes, Diaz makes possibly the biggest, and the Canadiens are down 4-2.

Conclusion: Defensive depth is the biggest issue for the Canadiens, and it will be even after Emelin returns. That said, Therrien needs to preach simplicity to guys that aren't named Subban or Markov. You can't really blame Subban for not seeing a passing opportunity as much as you can Diaz for not making the simple play. If you have to have Bouillon and Diaz on the ice with a defensively raw trio like the EGG line, then make sure they know there's very little room for error.

Please let me know if there are specific plays that you would like broken down from any games to come, and I will try to do what I can.