Not really though. The Canadiens rebounded from a 2-0 shutout loss to the Sharks to continue their string of recent success against the Rangers. Here are some initial thoughts.

Budaj is arguably the best backup goalie in the league.

Douglas Murray is pretty good at forechecking into our own end, so there's that.

Stepan/Kreider/Richards have an 81.8% Fenwick at 5 vs 5 through two for the Rangers

This is from literally one minute ago. RT @ArikParnass Nobody should be worrying about Alex Galchenyuk, not at all.

How do you solve a problem like David Ortiz? You basically don’t bother.

Three Stars:
For those of you who weren't active in the game thread, our own Scott Matla had to head out early, and asked for Twitter updates. A little later he was told that big bad Brian Boyle had crushed P.K. Subban and that he was badly injured. We now bring you his responses and a great joke.
Third Star

First Star
TrevaDaddy with this great joke on the subject: 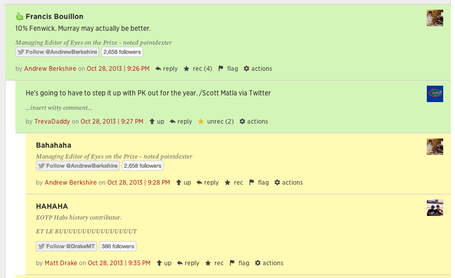 Remember to get involved with the Game Threads for ALL Habs games if you want your nights ruined, only to find out that your biggest nightmare is only a fun prank. YAY!