Breaking Down Film - Defensive Coverage and the Empty Net Offense

The Canadiens have gone 2-1 on the current west coast road trip, but had some issues in particular against the Flames. Here I break down a couple of those problems.

Share All sharing options for: Breaking Down Film - Defensive Coverage and the Empty Net Offense

If somebody had told me they thought the Canadiens would start their road trip by losing to the Flames and then beating the Oilers and Canucks, I would have said "yeah probably, the NHL's a fucked up place." And here we are. But rather than just accept a disappointing result against the Flames, let's look at a couple of plays that looked bad, and one of which crucially stymied a potential game-tying charge.

First, early in the second period the Habs were caught in their own zone for an extended period, leading to several good chances and one spectacular save by Carey Price. Let's break it down. 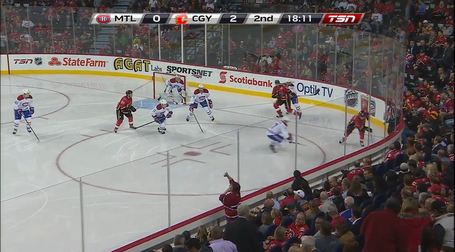 The Habs have the kid line on the ice with Tinordi and Bouillon on the back end. David Jones gets the puck here after the Flames manage to pass their way into the zone. Eller, as the centre, serves as F1. It's his job to seal off the slot and the front of the net, helping the defensemen down low. Galchenyuk and Gallagher, as the wingers, are F2 and F3, and are supposed to guard the two points, getting sticks in the passing lanes and their bodies in the shooting lanes. 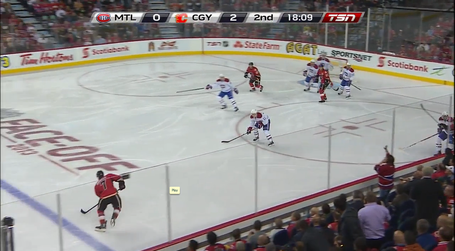 This is where things begin to go wrong. Galchenyuk goes to finish his check on Jones, which means that he can't get his man. As a result, Gallagher abandons his role and rushes to TJ Brodie, defending the point shot. As you can see, Eller is sticking out his stick to Gallagher to tell him to get his man. Eller is caught between a rock and a hard place because if he abandons his spot and heads towards Mark Giordano at the other point, that will leave the slot wide open and an almost sure scoring chance. If he stays, however, that leaves a free shot from the point for the Flames captain. 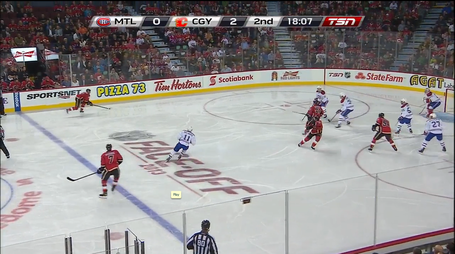 Eller makes the conservative choice, holds his ground, and tries to communicate with his teammates to get them all back in position. At this point, though, the best they can hope for is a quick shot on Price from Giordano, a righty, at the right boards. They are now stuck in a 4-1 formation - which Therrien often likes - in a situation in which it is unideal. 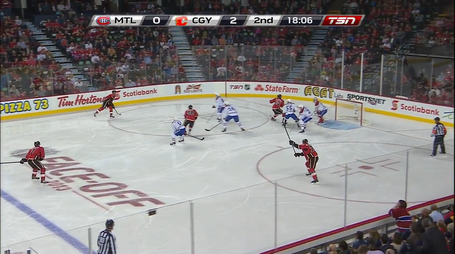 What often happens when there is miscommunication is that nobody does something, and then as a reflex everyone does something. That's what happens here. When Eller doesn't initially rush the puck-carrier, Tinordi and Gallagher start to. Then, when they see that Eller is in fact moving up, they stop. That leaves three Canadiens in no-man's land, and the two defensemen (well, Bouillon and Chuckie) covering one guy to the right of the net (and maybe even screening Price). Meanwhile, both Brodie and Glencross are wide open. Luckily for the Habs, Giordano makes what is likely the wrong choice and shoots. 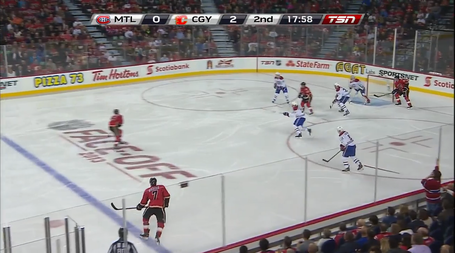 Price makes the save, but the rebound is recovered but the Flames and the puck is moved back up to the point. Galchenyuk and Gallagher are once again scrambling, after chasing into the corner. Giordano has another clear shot at the net, and again he takes it. 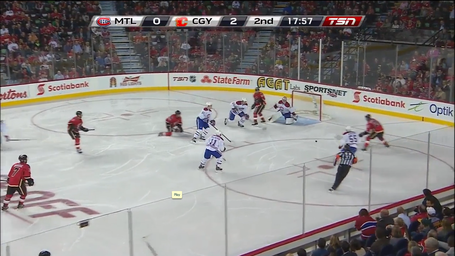 This time, the Habs get a little unlucky. The puck is shot right into Ben Street in front, and the puck bounces out to the right, where Glencross has beaten a stick-less Bouillon out of the corner and is wide open. Tinordi should have identified that Bouillon had lost his stick and offered support on that side, since Eller was effectively covering nobody in the shot above. Instead, the lucky bounce results in a great chance, which Price has to use his trademark exceptional lateral movement to save. A lack of communication, some inexperience, and a dash of bad luck leads to a couple of early chances in the second period, and only Price and a lack of patience from Giordano keep the puck out of the net.

Now let's take a look at the closing two minutes of the game. P.K. Subban takes a dumb penalty after dominating the game for the previous five ten minutes, and the Flames go to the power play trying to close out the game up a goal. 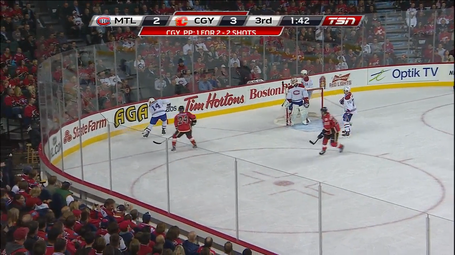 The Flames win the faceoff and shoot the puck towards Price, with it deflecting just wide. Here is what I would considering the critical moment of this entire sequence, and it's early on. Plekanec is first to the puck in the corner. There is 1:42 left, and the road team needs a goal. Likely unbeknownst to Plekanec, Gionta has broken his stick and has gone to the bench for a replacement. Since Plekanec is facing the other way, either Tinordi or Markov should have relayed that info to their centreman. What he should do - whether or not Gionta is up the boards - is slide the puck along to Tinordi, who can spearhead the attack with only one Calgary player forechecking. It is the safe play and the most efficient play. But we've talked a lot about the Canadiens being sloppy in possession; this is another example of that. The puck is flipped up the boards to nobody, and the Habs are forced back into a defensive shell. 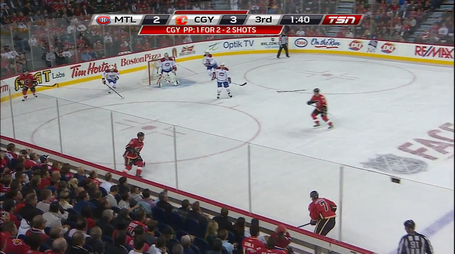 As you can see, with only 1:40 left, things aren't looking too encouraging. There's nobody in white within 40 feet of the puck. 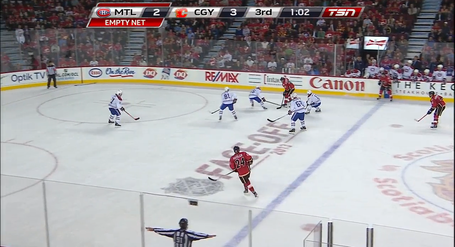 After finally clearing the puck, Bouillon actually makes a nice play here to strip the puck in his own zone. Gallagher recovers it and starts up-ice. But now there's less than a minute left, and he feels the pressure to attack quickly, and force a pass past two Flame sticks. 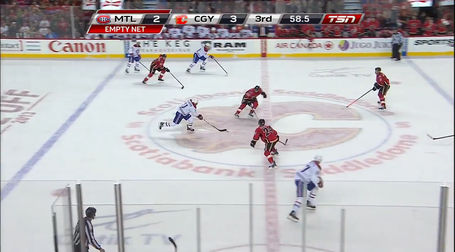 The puck is turned over and winds up back in the Canadiens zone, where Francis Bouillon now really needs to make a good pass or his team is pretty much toast. He has Eller to the inside and Gallagher just ahead. 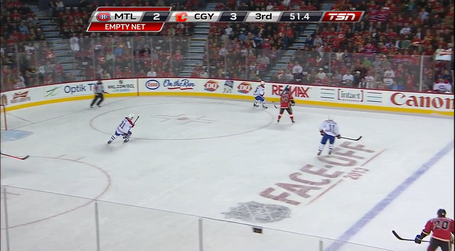 Instead he lazily lifts the puck past both of them and to nobody. 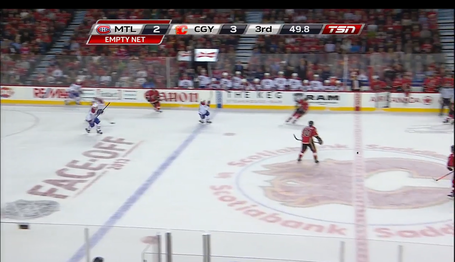 After the Flames miss the net on another attempt to close the game, Bouillon recovers the puck in the corner. Nobody is particularly in good position for a pass, but Bouillon also has some time to take the puck behind his own net or rim it around to Pacioretty. 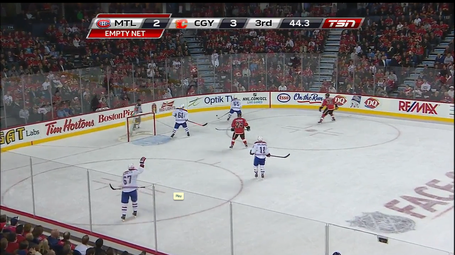 Instead, he once again lazily swats the puck back to the blue-line without any Canadiens player anywhere in the vicinity. 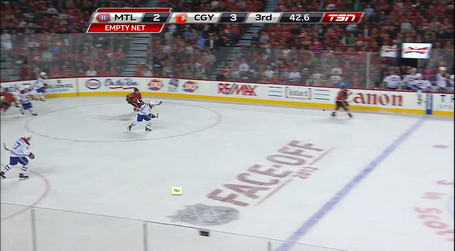 WIth this second huge mistake from Bouillon, the Canadiens are unable to even get back into the offensive zone until Diaz dumps the puck in with 10 seconds left. The supposedly superior team can't even get a good chance on net before the clock expires.

Let's contrast this to how the Edmonton Oilers handled having the net empty in the final four minutes against the Canadiens the next night. Dallas Eakins was known with the Marlies for pulling his goalie early on when down by a couple of goals. The strategy tends to be trashed by old-school analysts using anecdotal evidence, but the statistics show that mathematically it's a strategy that makes sense. The advantage to having it as a consistent strategy is that as a coach you know it's something to work on in practice. It is clear from the final minutes of that game that the Oilers are well-coaches on the importance of keeping possession, especially with the net empty, and of making every movement meaningful. 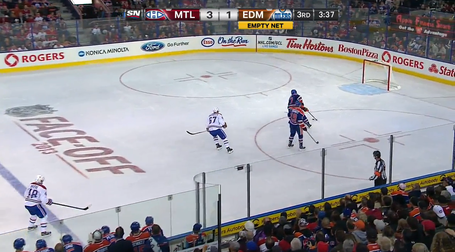 Here, the Canadiens have managed to clear the puck following some good zone time from the Oilers. Anton Belov easily beats Max Pacioretty to the puck, and here faces a decision. The Bouillon-esque (or, not to pick on him, the Canadiens-esque) play here would be to backhand the puck off the boards up to one of the forwards. But that's a low percentage play, especially with a couple of the forwards going for a change. 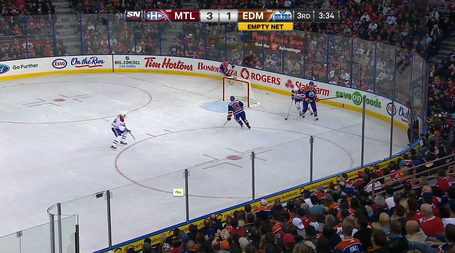 As a result, Belov makes the smart decision and circles back behind his net, leaving the puck to Justin Schultz, who eventually regroups again when the break-out isn't to his liking and passes back to his partner. 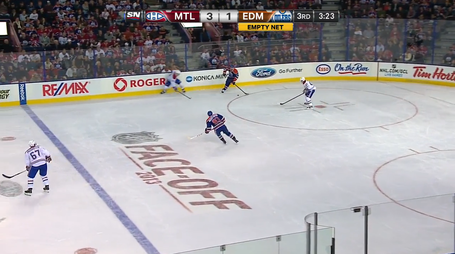 Belov waits for a good breakout to develop, and finally slips the puck cleanly to Ryan Nugent-Hopkins. It's a safe play, but also a smart play because RNH is skating up ice with speed. The puck can then be send forward to Taylor Hall, and he has great puck support from the other forwards. 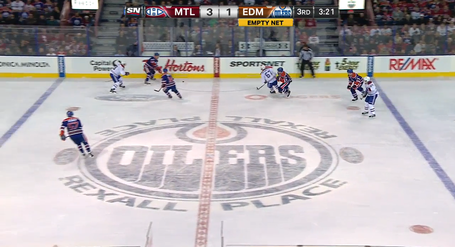 Hall can either chip the puck efficiently behind him to Jordan Eberle as he enters the zone uncovered, or can stretch it over to David Perron. In this particular case Hall tries to slip it back to Nugent-Hopkins with speed, but the puck skips over his stick and the Oilers regroup. In any case, the process is correct. It takes the Canadiens more than three minutes to score on the empty net, and in that time Edmonton has several quality chances to score themselves. This is how to efficiently play with an empty net. Just like on the power play, attention to detail is critical.