Which Montreal Canadien Wore It Best: #21

Share All sharing options for: Which Montreal Canadien Wore It Best: #21 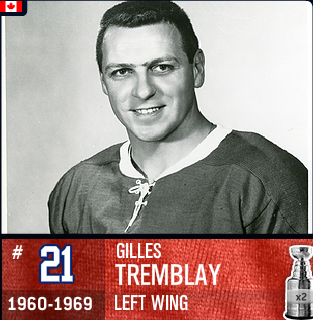 Possibly the fastest skater in the 1960's, Gilles Tremblay was cursed to be injury prone, but he still managed to be a consistent scorer, hitting 30 goals once and 20 goals 5 times. Tremblay's speed was used to convert him into a shut down foward, often shadowing the league's best players. A two time Stanley Cup winner, he would have had three if not for being forced to retire due to respiratory problems in 1969. Tremblay didn't leave hockey though, he was one of the first players to cross over into broadcasting. His time behind the microphone earned him recognition with the Foster Hewitt Award in 2002. 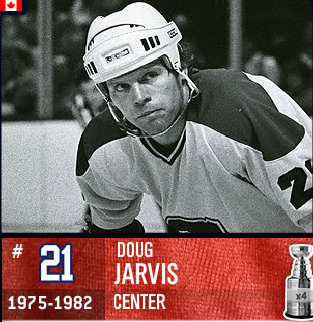 The ultimate Iron Man, Doug Jarvis played 964 straight games from 1975 to 1987. It's a record unlikely to ever be broken in today's faster, more taxing game. Jarvis was an offensive star in junior, but with the loaded Canadiens, Scotty Bowman turned him into the premier checking center in the NHL. Jarvis was also one of the greatest faceoff men in league history, often out for important draws for the dominant Habs. You couldn't ask for a better start to a career than Jarvis had, 964 straight games is one thing, but how about your first 4 seasons all ending in a Stanley Cup parade? Jarvis contributed to the Canadiens organization after retirement as well, spending two years coaching the Hamilton Bulldogs and several years as an assistant coach for the big club. 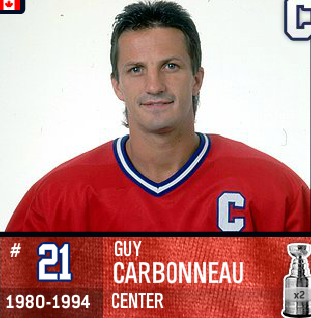 There aren't many Habs that played exclusively after the 1970's that are as loved as Guy Carbonneau. A three time winner of the Selke Trophy, Carbonneau learned from the very best in Bob Gainey how to play the NHL's defensive game. Even as a defensive specialist, Carbonneau broke through for consistent offense. He hit the 20 goal mark 5 times, and the 50 point mark another 5. Perhaps Carbonneau's greatest accomplishment however, was captaining the Canadiens to their most recent Stanley Cup victory. A two time Cup winner in Montreal, 'Carbo' won it again later in his career with the Dallas Stars in 1999, under the guidance of GM Bob Gainey. Soon after, Gainey would be the GM of the Canadiens, and he would bring Carbonneau back to Montreal as an assistant, then head coach. 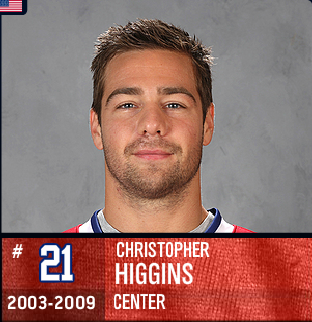 When looking over players for #21 I thought, "Hey Chris Higgins was good", but upon further reflection, the speedy defensive minded forward probably isn't good enough to be here. Unless of course you really like his abs. Burdened by expectations of his own doing, Higgins couldn't live up to his own lofty goals as an offensive player after 3 straight 20 goal seasons. Traded to the Rangers in the deal for Scott Gomez, it was a couple years before Higgins eventually found himself in Vancouver and back to his normal point producing ways. 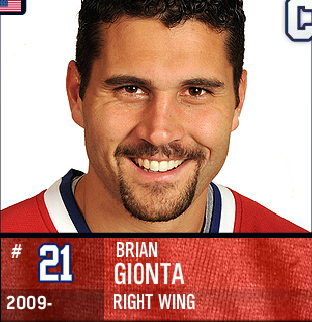 The shortest tenured player of the bunch for #21, Brian Gionta is the current captain of the Montreal Canadiens, and over the last 3 years, no Hab has more goals. After signing with the team as an unrestricted free agent in the rebuild summer of 2009, Gionta lead the Canadiens in scoring 2 straight years, just missing out on 30 goals both times. Last season injuries limited him to just 31 games, and without Gionta the Canadiens crumbled and finished last in the Eastern Conference. Healthy now and ready to go for the shortened season, Gionta hopes to lead the Canadiens back into the playoffs, something his teams have never failed to do while he's been in the lineup.