Which Montreal Canadien Wore It Best: #22

Share All sharing options for: Which Montreal Canadien Wore It Best: #22 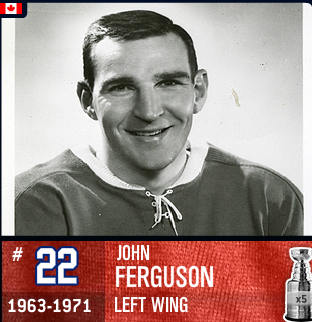 John Ferguson has achieved legendary status for his toughness. He didn't wait very long to begin establishing that legend, dropping the gloves 12 seconds into his first NHL game. By the end of the game, he'd also piled up 2 goals and an assist. Ferguson made the NHL late at 25, but he was an impact player right away. The 5'11' 190lbs winger was soon the most feared physical player in the league, and he scored too, twice hitting the 20 goal mark, and staying above 30 points 7 of his 8 seasons. A five time Stanley Cup winner in just 8 years, Ferguson was the heart and soul of a dominant Canadiens team. 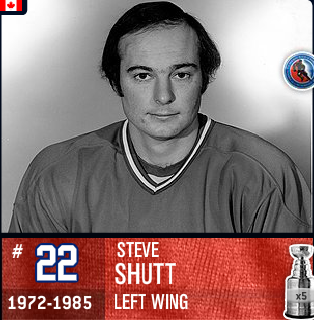 One of the most dynamic goal scorers to ever pull on the Habs jersey, Steve Shutt was a fixture of the most dominant team to ever play the game of hockey, the 1970's Canadiens. One thing we learned about Shutt recently, is that his deployment was a big part of his success. In my study of the Habs' defeat of Boston in 1979, I noticed that Scotty Bowman carefully managed Shutt's zone starts to keep him in the offensive zone. Nevertheless, Shutt scored over 400 regular season goals for the Canadiens, including the only 60 goal season by any Canadien not named Guy Lafleur. He also scored 50 playoff goals in just 96 games. A Hockey Hall of Famer and 5 time Stanley Cup Winner, Shutt holds the Canadiens record for most consecutive 30 goal seasons with 9.