Which Montreal Canadien Wore It Best: #23

Share All sharing options for: Which Montreal Canadien Wore It Best: #23 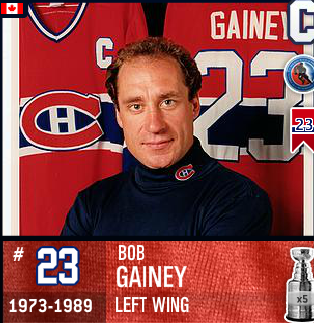 Bob Gainey's 6'2", 200lbs frame made him one of the more imposing players in the league in the 1970's, although he hit harder than his frame would have you believe. The pioneer of the defensive forward position, Gainey was called the most complete player on the planet by legendary Russian coach Viktor Tikhonov in 1979. Nothing was easy about playing against Bob Gainey. A long time captain of the Montreal Canadiens, Hockey Hall of Famer, his number retired by the Canadiens, a five time Stanley Cup winner, Gainey did it all. If you listen to the old timers, the Selke Trophy was invented simply because the NHL realized they needed some way to award Gainey for how great he was as a two way forward. Gainey wasn't just a player for the Habs though, and that's where he record begins to get a little spotty. Gainey coached the Canadiens in emergency stints twice, and was the organization's general manager from 2003-2009. Opinions differ on whether Gainey's tenure as GM was a success or failure, but it certainly wasn't up to par with his amazing playing career. 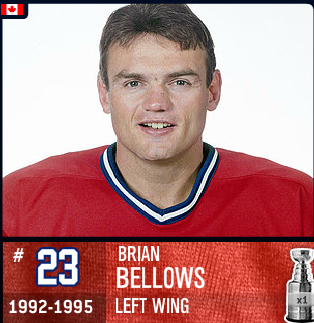 Brian Bellows had two dominant seasons for the Canadiens, one of which was a 40 goal, 88 point tear through 1992-93 to the 24th Stanley Cup the Canadiens have seen. Bellows was a frightening combination of speed, hands, and power. Although he was only 5'11", his stocky frame allowed him to be a physical presence. Bellows was derailed by chronic injuries in the lockout shortened 1994-95 season, he was soon traded to the Tampa Bay Lightning. After Bellows retired he joined SNL to host the program "Brian Bellows' Safari Planet".