Why do I have a feeling that if the Habs lost last night that the focus would be on Carey Price?

It is understandable with the over reliance on save percentage to analyze a goaltenders performance. Is it fair? Depends.

If Price was wearing a Budaj jersey last night I think everybody looks at the three goals and accepts that Budaj probably isn't good enough to stop all three shots and moves on. The fact that the expectations for Price have reached a stratospheric level doesn't allow me to accept "nothing he can do".

Remember, in a one game sample one save is the difference between .857 and .904. The latter is above league average and not far from his expected performance last night. Was he terrible? Or was he terrible for Carey Price? 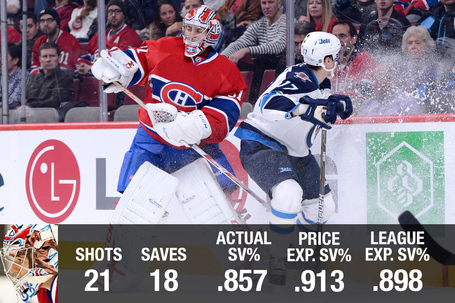 I have the discussion with my 8 year old son about what his expectations are as a goaltender. He wants to be elite, so we center our discussions on what an elite goaltenders expectation should be. We have decided on the following.

Elite - Stops all the average shots and makes miraculous saves.

Using our definitions, our expectations for Price exist in category 3. If you look at last night he made plenty of miraculous saves. The one on Jokinen being the largest, but he also had to deal with multiple tips and cross ice feeds. The question is did he have any letdowns that would drop him into the average category?

Let's look at the three goals the Winnipeg Jets scored.

The Blake Wheeler goal was on the power play, so it is generally tough to place the blame on the goaltender because of the passing lanes and shooting lanes that create plenty of secondary opportunities for the goaltender to anticipate. 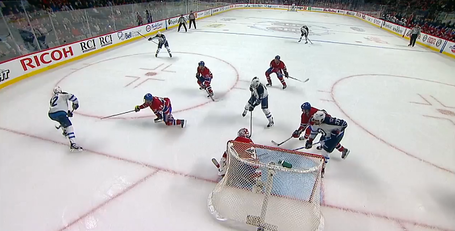 At this point Price is in good shape. He has adjusted to the feed to Oli Jokinen down low and the Hab defense has collapsed down low to take away Evander Kane and Dustin Byfuglien. 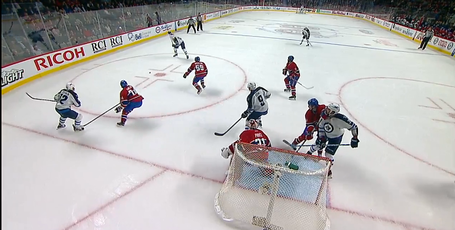 This is where the problems begin. Francis Bouillon leaves Kane in front of the net and attempts to take away Wheeler's shot. This is where the sight lines for Price begin to become a problem. 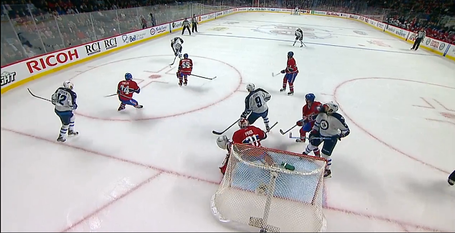 As you can see here, he is fighting to see around the Cube and has to deal with a possible tip attempt from Kane. 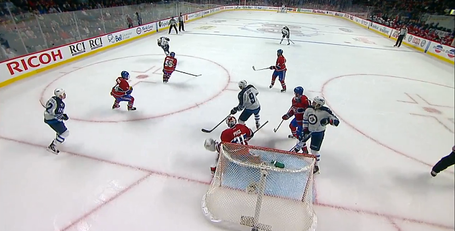 Any delay on picking up the shot leads to a disadvantage for Price, add in the distraction of Kane's stick and the difficulty of this stop increases with every inch the puck moves. 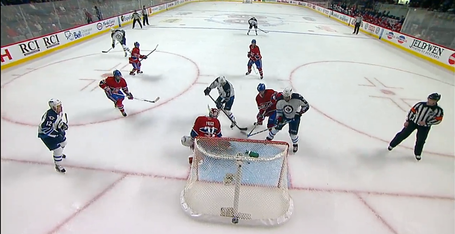 This is where luck comes into play. Price is in pretty good save position but the puck trickles through his arm. It is a save he will make more often than not, unfortunately yesterday was one of the nots. 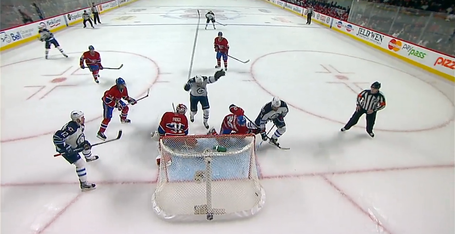 The Nik Antropov goal also had elements of luck to it as well. Price actually recovers into a miraculous save position, but is not rewarded for his athletic and technical brilliance. 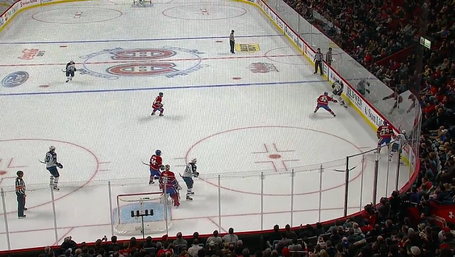 This goal is listed as even strength, but as you can see from the screen capture this is a Jets power play. Antropov is all alone to the left hash with a clear passing lane to him. 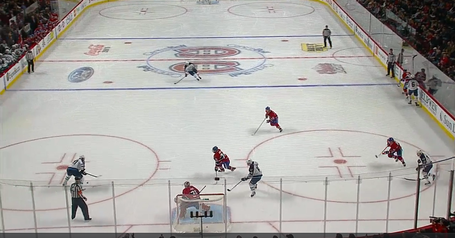 Fortunately for Price, Antropov cannot control the pass from Ron Hainsey which allows Price to laterally transition in good position. 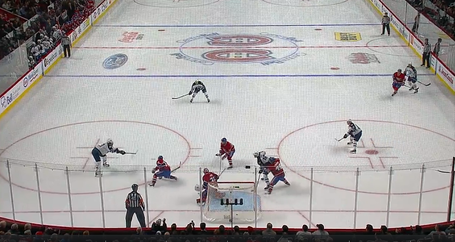 WIth the shooting lane collapsing and Price in good position, Antropov decides on the pass option and Price bites on a shot attempt and drops into a butterfly. This would be death for a lot of NHL goaltenders. 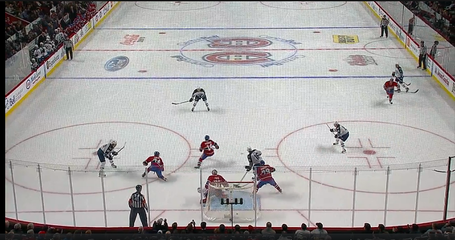 Price's lateral quickness and great edge work allows for him to track the pass and load up his drive leg for a desperation push as Bryan Little awaits the one-timer. 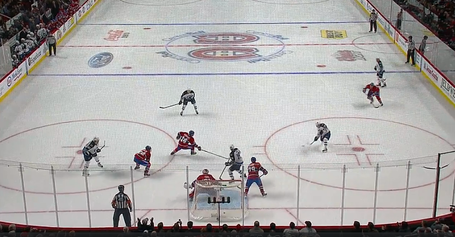 Little has a wide-open net if he can get the puck past Markov as Price desperately tries to transition. 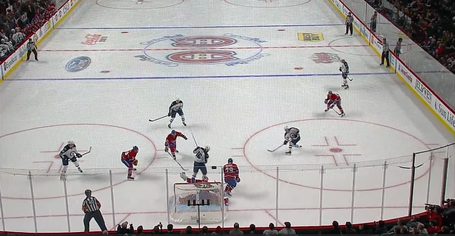 Incredibly Price gets across and had this covered, even if Markov doesn't block it I think Price makes the save and probably gets a more favorable rebound than the one off Markov. 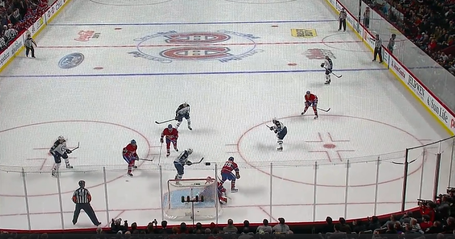 Because Price had to lunge desperately cross crease he has no chance to edge and push back towards the rebound bounding towards Antropov and the open net. 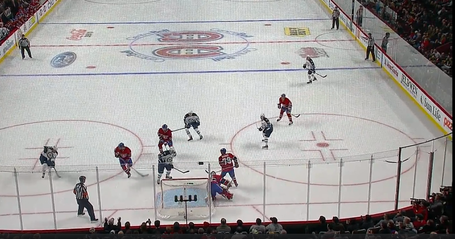 You can see Price loading up his drive leg for a second desperation attempt. 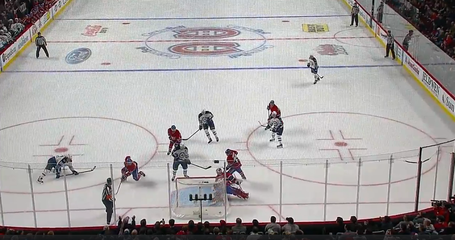 No chance. 2-2. If you look towards the penalty box, the door is just being opened. Technically this was an even strength event, but it is clear from this that this was a power play goal against.

Here is where we get into the expectation of elite and what it entails. There is no doubt that Jokinen unleashes a great shot and this event on it's own is totally ignored by everybody if the expected outcome of him not placing it perfectly occurs. Nobody notices positioning or angle without a negative result. 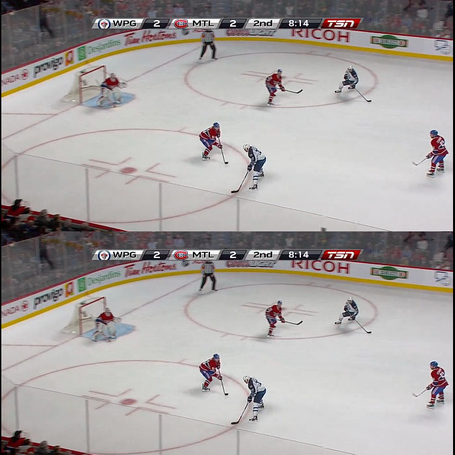 The top image is Carey Price's true positioning and the bottom is the ideal positioning. The two on one option doesn't exist because it is covered nicely by Josh Gorges. With no pass option and Raphael Diaz doing a nice job of keeping him outside, Jokinen's only option is to shoot. Price needs to place his body between the puck and the stick. Price seems to be aligned with Jokinen's body. 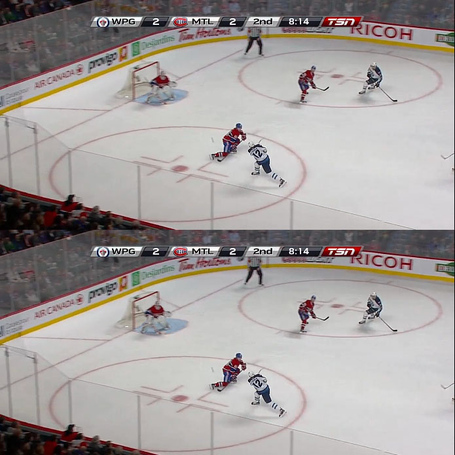 With the release of the shot you can see the opening Price has provided in contrast to how the space is closed off below. There isn't a quick lateral transition, so although the mistake is minor, in this instance it is costly. 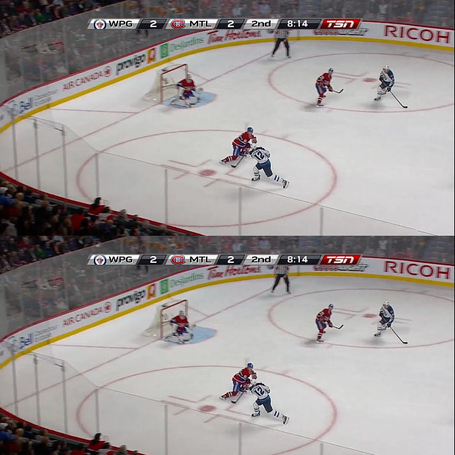 With the shot on it's way Price drops into the butterfly. If he maintains his feet he can direct it into the corner, but with the plane of this puck moving upward this is mistake number two. 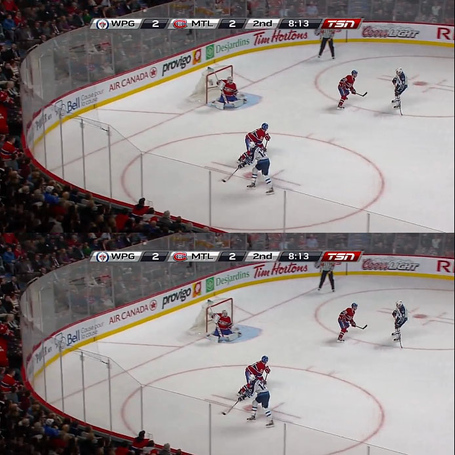 Jokinen places it just under the bar but far enough inside the post that it jars the water bottle. If Price maintains the proper angle or stays on his feet he likely makes a difficult save.

Was this a mistake? Yes. Was it a glaring error? No.

WIth high expectations comes greater scrutiny and sometimes your luck will overshadow mistakes. Price was a little unlucky on all three goals. Sometimes pucks find holes and on the Wheeler/Antropov goals he was in the proper position but just didn't have the puck hit him or have a teammate bail him out. The third goal was a great shot that he could have stopped with better positioning and maintaining his feet.

That mistake was the difference between an average save percentage and a "blowup" performance.

Price's last two games haven't been at the level of his first three, but I don't think that is anything outside of probable outcomes evening out.

Price is an elite goaltender who didn't offer an elite performance. Unfortunately for him, he has spoiled us and we are now the bitchy spoiled socialites who rail against life when our BMW is in the shop. The same little bitchy fans that told Roy to go f@#k himself when he had the audacity to have a bad night.

Price was strong enough last night and if you replaced Ondrej Pavelec with him the Jets win the game. 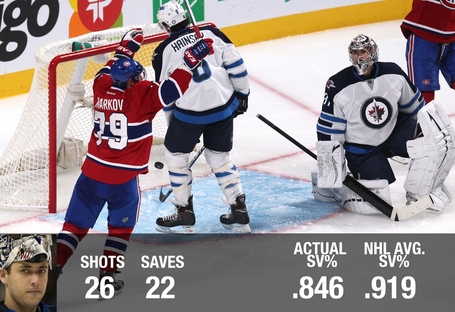 Speaking of Pavelec, watching a goaltender like him makes me appreciate Carey Price all the more. Most of the shots he faced did not require him to be in transition, his rebound control was average and his awareness and footwork on the tying goal was what you would expect from a replacement level goaltender.

We won. Everyone's happy. On to Budaj.