Which Montreal Canadien Wore It Best: #11

Share All sharing options for: Which Montreal Canadien Wore It Best: #11 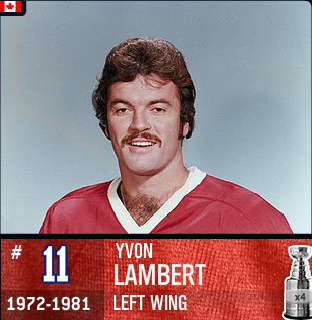 Most famous for his overtime goal in 1979 that sent the Bruins packing, Yvon Lambert was a key second liner for the Canadiens' dynasty club in the 1970's. A four time Stanley Cup champion, Lambert hit the 20 goal mark 6 times in his 8 years with the Habs, and notched just as many 50+ point seasons. A boisterous dressing room presence, Lambert's affable personality brought him back to Montreal after retirement, where he's served as a team ambassador with other Habs alumni. 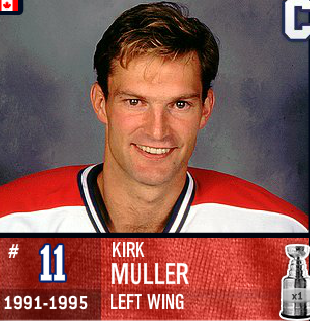 In his short career with the Canadiens, Captain Kirk did it all. Back to back 35+ goal seasons in 1992 and 1993, including his career high for points with 94 in '93, set the tone for what kind of player Muller was. At 6', Muller wasn't the biggest player in the NHL, but he was unrelentingly physical and drove the net with the best of them. Muller was a huge part of the Canadiens' Stanley Cup victory in 1993, including scoring the cup clinching goal against the LA Kings in game 5. A victim to Serge Savard's tinkering towards the end of his term as GM, Muller was traded soon after being named captain in exchange for Pierre Turgeon. After retirement, Muller was brought back into the Habs fold as an assistant coach for Guy Carbonneau. With hindsight being 20/20, we can now see how much of an impact Muller had, creating a league leading powerplay on the back of Andrei Markov that lead to a 1st place finish in the Eastern Conference in 2007-08. Itching to become a head coach, Muller eventually left the Canadiens organization and is now the head coach of the Hurricanes. 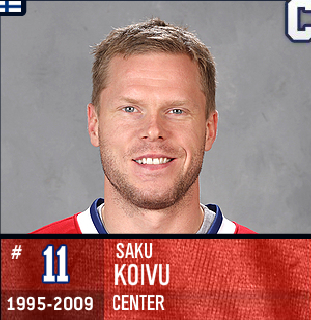 The second longest serving Canadiens captain in team history, Saku Koivu trails only Jean Beliveau in that regard. An inspirational leader for the Habs, Koivu broke into the league the year after its first lockout, hitting the 20 goal mark as a rookie. The following year Koivu exploded offensively and at one point was leading the league in points, but a knee on knee hit set about a career that would be plagued by injuries, and Koivu was never able to reach the same heights offensively. 4 years later Koivu would be hit with another setback, as he was diagnosed with non-Hodgkins lymphoma. Immediately going under treatment, Koivu made a miraculous recover in time to play the last 3 games of the season in 2002, recording 2 assists. The cheers in the Bell Centre for his return were awe inspiring. Even more impressive than his initial return, Koivu lead the Canadiens to a first round upset of the Boston Bruins, and scored 10 points in 12 playoff games. The year after his cancer scare Koivu played all 82 games, hit 21 goals for the first time since his rookie year, and lead the team in points with 71. It was the first time he would play a full season since his rookie year. Koivu's time with the Canadiens ran out after the disaster that was the 2008-09 season, but he's still playing very well at the age of 38 with his best friend, Teemu Selanne, in Anaheim. 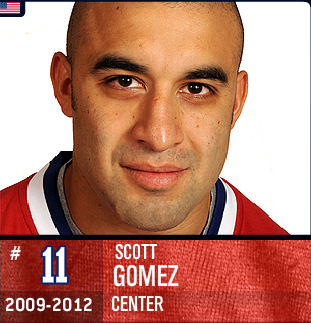