The Canadiens dominated on the shot clock but were killed by bad bounces. But in the end, Andrei Markov saved the day.

After losing Max Pacioretty to an emergency appendectomy yesterday night, and with P.K. Subban still not signed, it's fair to say that I was pretty down on the Habs going into tonight's game. That it was against the undefeated New Jersey Devils, with Martin Brodeur usually terrorizing the Habs, especially in Montreal, I was pretty much sure that the Habs would be coming away with a loss.

Turns out that there was no reason for that pessimism.

The Canadiens blitzed the Devils in the first period, with the 4th line setting the tone. Yes everyone, the 4th line of the Montreal Canadiens can set the tone now. The team actually has a reasonable amount of depth!

Ryan White, who's been the best fourth liner this year in my opinion, capitalized on Brodeur being unable to control a rebound on an Alexei Emelin point shot that was tipped slightly by Travis Moen. White's goal was his first of the season, and first since April 9th, 2011 against the Leafs, a period of 658 days.

After White's first of the year, a great Galchenyuk pass through two Devils players off the rush found a streaking Brendan Gallagher, who one timed his first NHL goal into a yawning cage. Gally to Gally is a thing Habs fans could get used to.

The second period didn't start so well, with Patrik Elias tipping a Mark Fayne shot past Carey Price. On multiple replays the tip looked to be above the crossbar, but Elias was pretty far from the net so you can understand how the reviewers awarded the goal.

The shift following the goal was horrendous, as the newly formed line with Lars Eller taking Pacioretty's place with David Desharnais and Erik Cole was hemmed in the zone for what seemed like ages. The Devils won puck battle after battle, and it took a misplay of their own players to finally clear the zone and get a change. For all that zone dominance though, the Devils only managed 8 shots in the period, and failed to tie the game.

To open the third period, Alex Galchenyuk once again made a smart pass, this time a lob towards the net that Brandon Prust smacked out of the air and past a surprised Brodeur. The goal was Prust's first as a Hab, and he joined Gallagher after the game for a photo with both of their first goal pucks. 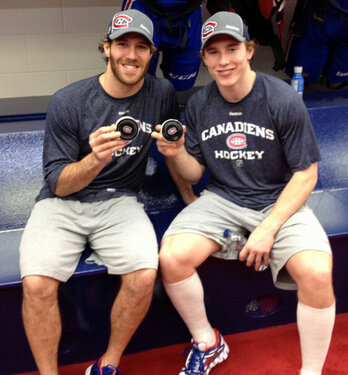 But the Devils refused to die, as they so often do, and the Canadiens tempted fate when Galchenyuk and Prust both got called for high sticking on the same shift. Mitch Melnick had a great quip in his postgame blog about it:

"Alex Galchenyuk - Brendan Gallagher - Brandon Prust. Man are they a treat to watch. So in sync already, they're even taking penalties at the same time."

The ensuing 5-on-3 didn't last long, as a blocked pass off of the stick of Josh Gorges ended up getting shovelled into the net by David Clarkson. The second dumb luck goal for the Devils of the night.

Eight minutes later, blown coverage by Gorges and Cole lead to a goal mouth one timer by apparent Hab killer Dainius Zubrus that squeaked by Price, once again victimized by the inverted VH posture that he's adopted this season. Patrik Elias' assist on the play was his 900th career point in the NHL. Hats off to him.

In spite of dominating the shot clock, the game was tied. For a moment it felt a little bit like last season, with the Habs blowing a third period lead and clumsily allowing other teams to bowl over them, but when overtime hit it was once again the Canadiens who took over.

It's important to remember that all teams sit back when they have a lead. Whether they're coached to do it or not, players become more risk averse when they're playing with a lead. The result is that leading teams are often outshot. This is a big reason why the Habs had been outshot in two of the three previous games leading into this one. This phenomena is commonly referred to as score effects.

When the score was tied, the Habs turned the engines back on. Finally looking like he's woken up from his usual slow start to the year, Erik Cole forced Andy Greene to take a penalty by rushing wide and trying to cut in on the net.

On the ensuing powerplay, Andrei Markov was, as usual on the powerplay, flat out dominant. With a seemingly odd choice of personnel to start the PP, Therrien sent out Markov with Rene Bourque, Cole, and Desharnais. After Desharnais set up Bourque for a shot that missed the net, Cole and Markov pounced on it, and Markov put it home.

The overtime winner was the third straight game winning goal for Markov, which ties a career high for a whole season for him, set in 2008-09 in 78 games. Markov is currently shooting at 40%, so expect the goals to disappear for a bit eventually. That said, don't take anything away from how he's played. The newly dubbed Iron Curtain™ pairing of Markov and Alexei Emelin has been flat out dominant together to start the year. Their chemistry is readily apparent and matched against Ilya Kovalchuk all night, they outplayed his line on the possession and scoring chance side of things according to Olivier Bouchard. The excellent play of this pairing has us thinking that when Subban finally signs, and he will sign, the Habs will have 2 top pairings, and a guy in Raphael Diaz who's far better than most 3rd pairing defensemen.

With Pacioretty out, there's going to be a bigger impetus on Rene Bourque to begin to score. It seemed like he noticed that tonight and played accordingly. Bourque was flat out dominant on the puck tonight, and put himself in great position to score constantly. His only problem was that of the whopping 13 shot attempts that he fired, only 3 hit Brodeur. 7 shots missed the net, and 3 more were blocked. Shooting that often, Bourque is going to begin scoring soon, but he may need to focus a bit more on getting it on net.

Francis Bouillon was back over 20 minutes tonight, but he played a solid game overall, and laid out a few monster hits when the Devils had momentum. Bouillon was also likely given a bit more ice since Raphael Diaz seemed to be fighting the puck a lot in the final 40 minutes, and Yannick Weber was no better, only being trusted with 10:17 of ice time, just under 9 minutes at even strength.

The tougher Devils team forced Therrien into a different bench management set up, with the bottom 6 forwards getting less ice time than they did in the first three games. Therrien leaned especially hard on the Bourque - Tomas Plekanec - Brian Gionta line, all of whom played over 22 minutes. So far, it seems that Therrien is recognizing who's giving him the best performances and playing them accordingly, which is stellar from my point of view.

It's 4 games into the 2013 season, but even with Max Pacioretty out the feeling is positive. Next up for the Canadiens is rolling out the welcome mat for the Winnipeg Jets in the first half of a back-to-back set ending in Ottawa. The game is Tuesday evening at 7:30PM EST on RDS and TSN-Habs, although I'll be watching live from the Bell Centre.

To hear from the losing side tonight, check out our SB Nation brothers at In Lou We Trust.