Which Montreal Canadien Wore It Best: #13

The number 13 has been worn by four players for the Habs in over a 100 years of history, but only two make it to this list. Who wore it better? Also to wear #13: Lorenzo Bertrand and Edmond Bouchard

Share All sharing options for: Which Montreal Canadien Wore It Best: #13 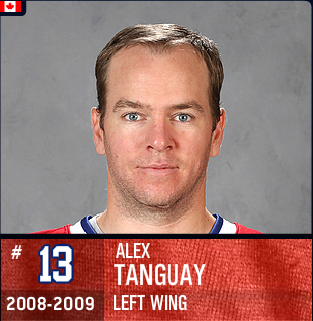 A gifted playmaker, Alex Tanguay was acquired from the Calgary Flames at the draft in the summer of 2008 to bolster the Canadiens' roster after a 1st place finish in the East ended in a second round flame out to the Flyers in just 5 games. Tanguay struggled mightily with injuries in his time with the Habs, but when he did play he was excellent. When put on a line with Saku Koivu and Alex Kovalev, Tanguay was absolutely lights out, but the collapse of the 2008-09 Canadiens wasn't going to be stopped, and he was injured again near the end of the season, only playing two playoff games, clearly hurting, en route to a sweep by the hated Bruins. Tanguay has since reinvigorated his career with the Calgary Flames. 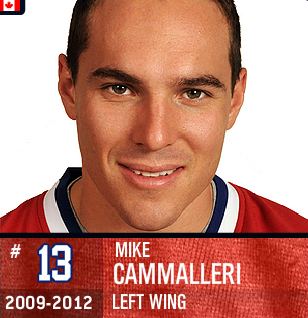 Acquired as an unrestricted free agent the same summer that Tanguay was let go, Mike Cammalleri also came to the Habs via the Flames. A direct replacement for Tanguay, Cammalleri's game was less playmaking and more sniping. Unfortunately for Cammalleri and the Canadiens, the similarities to Tanguay wouldn't end there, as Cammalleri would play 2.5 injury plagued seasons in Montreal. He did reach greater heights than Tanguay though, including being over a point per game in 26 playoff games, and scoring 13 times in 19 games in the deepest playoff run Montreal has seen since 1993. Cammalleri's injury struggles and a panicky management situation lead to him being traded back to Calgary last season in exchange for Rene Bourque, Patrick Holland, and a 2nd round pick in the 2013 NHL Entry Draft, where he plays with Tanguay.