A breakdown of Carey Price's 2013 season debut vs the Toronto Maple Leafs.

Share All sharing options for: Carey Price - Game One Review

Anybody familiar with the EOTP community knows that I have an ongoing shot quality project which has taken the majority of my time and minimized my contributions to mostly the comments section of this community.

I have asserted for a long time that save percentage is an extremely flawed stat and my research has provided some indications that this assertion may be correct. Since the project is still in it's data collection stage, I will not be sharing the data, nor a detailed breakdown of how I accrue my data sets.

I will attempt to provide as many individual game breakdowns throughout the 2013 season that I can. I am not attempting to prove my assertions at this point, but to share small snippets of what I have accrued instead of relaying the majority of my work through the comments section.

One goaltender I have a collected a strong dataset for is Carey Price. I have over 4,000 shots and a good idea of where his strengths and weaknesses lie. So during the season I will attempt to compare his nightly performance to his individual expected save percentage based on over 4,000 shots and the league average based on over 20,000 shots. The study is not complete, so the numbers are a glimpse and are by no means a declaration by me that they are concrete and unassailable. I figured this was a better way to contribute to the EOTP community than bunkering down and providing nothing. 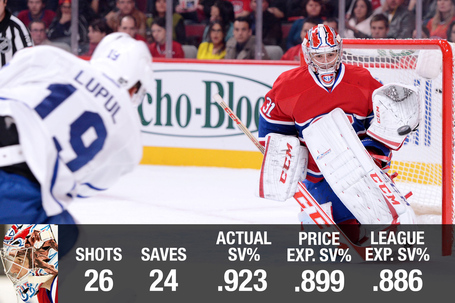 Last night was a strong debut for a goaltender who hasn't played an NHL game in close to 10 months. His even strength save percentage was perfect and his only problems took place short handed. The only thing I could criticize him on were two Kadri shots. On the initial goal, Price misread the pass as a cross ice feed and overplayed the pass, because of his incredible edgework and lateral quickness he almost made up for his error.

As you can see by the green area, there is no possible target for the Kessel pass outside of Kadri.

Price over pursues (Marc Andre Fleury style), but sniffs it out a quarter second to late. He reacts with a strong edge to halt his momentum and then drives himself back into a desperation save position. Unfortunately it was just enough for Kadri to beat him stick side.

If Kadri places that along the ice, Price had recovered enough for the robbery.

Price also seems to be experimenting with a Jonathan Quick/Tim Thomas save selection and it almost cost him a goal. Instead of his typical VH (Vertical/Horizontal pad stack) he went with the inverse selection which Quick uses.

Kadri fired a bad angle shot and Price almost misplayed it into his goal. After realizing he didn't have control he contorted his glove around the back of his body and managed to keep the puck out in a nerve-wracking awkward manner. With Price's size I prefer he only use the inverse on wraparounds and not the choice he made with Kadri about 15 feet away with an angle to shoot high.

Contrasting the performance of Ben Sievens was interesting. The CBC rewarding him with 1st star honours when his performance was barely above league expectation continues to frustrate me. Scrivens was not forced to move laterally and his defense did a great job of swallowing up his rebounds in the slot. Add in the four shots with a .99999999999999999 SV% expectancy from outside the blue line (the only reason it isn't 1,000) and he really only faced 18 shots with realistic goal scoring probability. 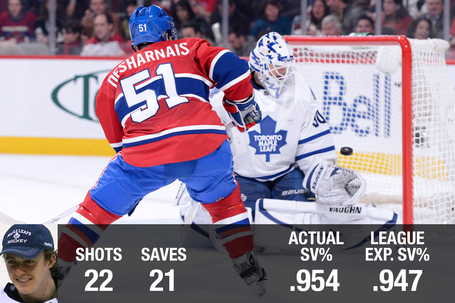 Although my Price Vezina prediction is based on his ability first and foremost, I do have a hunch that Therrien's system may inflate save percentage numbers. I haven't been able to contrast Fleury's career year or Theodore's, but I am taking a shot in the dark and attributing it to Therrien. This season provides me the perfect opportunity to run Price's previous standard against the league average and Therrien's system.

It will provide me with some insight into the legitimacy of my assertion and hopefully the complete results of my study will be ready during the 2014 NHL pre-season.