Which Montreal Canadien Wore It Best: #16

The number 16 has been worn by nine players for the Habs in over a 100 years of history, but only two make it to this list. Who wore it better? Also to wear #16: Art Giroux, Red Goupille, Adelarde Lafrance, Art Lesieur, Walt McCartney, Jean Pusie, and Dessie Smith.

Share All sharing options for: Which Montreal Canadien Wore It Best: #16 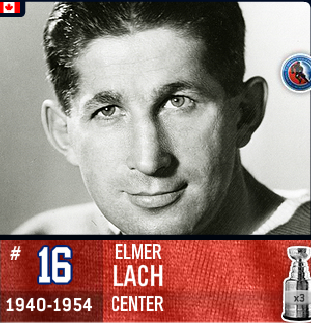 A member of the infamous "Punch Line" with Maurice Richard and Toe Blake, Elmer Lach helped to transform the Canadiens into the class of the NHL. The hard nosed center was known as the best playmaker in the league in those days, and set the Canadiens record for assists in a game with 6. When Maurice Richard set the NHL record for goals in a season with 50, Lach set the record for assists with 54. He won the first of two scoring titles that year, and received the Hart Trophy as league MVP. The next time he lead the league in scoring, he was named the first ever recipient of the Art Ross Trophy. Lach's tough approach to hockey lead to him missing nearly 1/5 of all the games he was scheduled to play in his 14 year career. Yet the soon-to-be 95 year old Saskatchewan native is still ticking and healthy, living in Montreal. In 2009 as part of the Canadiens' centennial celebrations, Lach's 16 was raised to the rafters of the Bell Centre. A lofty achievement for an upstart kid from Nokomis, to go along with his 3 Stanley Cup rings and a seat in the Hockey Hall of Fame. 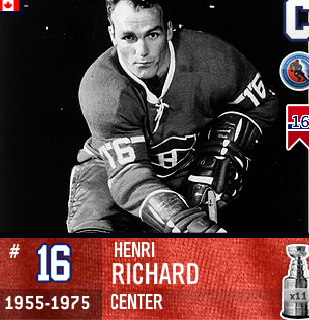 The spritely younger brother of the legendary Rocket RIchard, Henri broke out of his older brother's shadow as a legendary leader of the Canadiens in his own right. The Pocket Rocket played more games in a Habs jersey than any other player in their history, and won more Stanley Cups as a player than any NHLer. In fact, Henri Richard has as many Stanley Cups as a player as the entire Detroit Red WIngs organization. Think on that. Shall we make it even more impress? Richard has won more championships than any other athlete in North American pro sports history. Richard lead by example, working corners and playing harder than you would ever expect from such a small player. Yet Richard had longevity, and due to this longevity he ended up passing his brother's point totals. Only Guy Lafleur and Jean Beliveau accrued more points in a Canadiens jersey than Henri Richard. Later in his career, the silver haired Richard would captain the Canadiens for 4 seasons, proving his mettle again and again, capturing that famous Richard fire in the playoffs. Upon his retirement, the Canadiens raised his jersey to the rafters alongside his brother's, and he was inducted into the Hockey Hall of Fame.