Breaking down the 2013 Montreal Canadiens Schedule

When the news broke on Saturday night about the schedule, we brought it to you, but we didn't really go over it in depth. Let's change that, shall we?

Share All sharing options for: Breaking down the 2013 Montreal Canadiens Schedule

The venerable Dirk Hoag of the excellent Nashville Predators SBN site On The Forecheck has released this year's "super schedule", where he calculates the total travel of every NHL team along with the number of back to back games played.

Only 7 teams in the NHL travel fewer miles than the Canadiens' 16,612 (or 26,734 kilometres for those of us who've adopted the metric system) this season, and their 9 sets of back to back games is simply the median. A full 1/3 of the league plays 9 back to backs.

But let's delve a little deeper and look at the schedule month to month.

Due to the lockout, January is really shortened, but we get 6 Habs games in 11 days. 4 of the 6 games are against playoff teams from last year, including the division winning Florida Panthers. The Canadiens have just one back to back game in January, an all Canadian battle against the Winnipeg Jets in Montreal, then against the Senators in Ottawa the following night. The average number of points these opponents put up last year was 90.7, which is slightly below the playoff mark of 92 in the East. Surprisingly the average goal differential of the opponents the Habs face in January was -9.7 last year. Montreal hosts 4 of the first 6 games, including the first game of the year against the Maple Leafs. With New Jersey's loss of Zach Parise, this should be a month the Habs could take advantage of. There is no team there that is particularly strong.

The first full month of the 2013 season results in the Canadiens playing 14 times in 26 days, with 3 sets of back to back games, including their first four games of the month. Only half of the 14 games in February will be against playoff teams from last season, which means this first two months of the Canadiens schedule will be phenomenally important. If the Canadiens aren't wracking up wins by the end of February, the playoffs aren't going to happen. The average opponent in the month of February had 91.7 points in 2011-12, and a goal differential of -3.4. Tough games against the Bruins and the Rangers highlight a month of mostly weak teams, even if the schedule itself is jam packed. 8 of the 14 games are on Bell Centre ice. 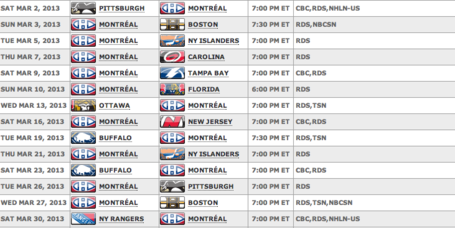 Another 14 games in March over just 28 days, highlighted by two games against the Bruins and two against the Penguins. This could be the roughest month for the Canadiens, and it'll have to be when they really come together as a team since they're on the road for 9 of the 14 games, including 5 straight after hosting the Penguins to start. 8 of the 14 games are against playoff teams from last season. Montreal's opponents in March averaged 94.2 points last season, and 6 of the 14 games are against 100+ point clubs in 2011-12. The average goal differential from this group of opponents was +6.8 last year. 3 back to back matchups in the month doesn't seem too bad, until you realize that two of them start with games against the mighty Penguins and end against the Bruins, in Boston. Going .500 in this month would seem to be a lofty goal for a Habs team that isn't expected to be very good.

A third straight month of 14 games, this time in 26 days, just like February. Half of the games in the month are against playoff teams from last season, similar to February's schedule, although there are only two sets of back to back games. Half of the final 14 games of the regular season will be at the Bell Centre, but the Canadiens finish off with 6 of the final 9 being played on the road. The average opponent the Habs face in April accrued 91.8 points last season nearly the exact same as the opponents from February. The average goal differential of Habs opponents in April was -0.1, making April the second toughest month of the year for the Habs if everything is the same as last year (it isn't). The season begins and ends against the Leafs, a tradition seemingly born out of the last lockout.

In a year where the NHL promised to focus on rivalries, the Canadiens only play the Bruins 4 times while playing the Sabres 5 times. It's a confusing situation there. To make matters worse, the Habs host the boring Sabres 3 of the 5 times, and spend 3 of their 5 games against the Leafs in Toronto.

The Habs will only see Sidney Crosby and Evgeni Malkin once in Montreal this year, on Saturday, March 2nd. Ditto for Steve Stamkos and Martin St. Louis, on Thursday, April 18th. We do get 2 dates with Alex Ovechkin in Montreal though, both in April, Tuesday the 9th and Saturday the 20th. The Canadiens also get to host the Flyers and Claude Giroux twice, Saturday, February 16th and Monday, April 15th, two games I'm sure Laura will want to check out.

26 of the Canadiens' 48 games will be broadcast nationally in English, 17 on CBC and 9 on TSN. RDS of course will carry all 48 games nationally in Canada En Français. It's unclear yet how many games the local station TSN-Habs will carry, but I'm guessing we could see upward of 35 games broadcast in English this year.