Which Montreal Canadien Wore It Best: #18

Share All sharing options for: Which Montreal Canadien Wore It Best: #18 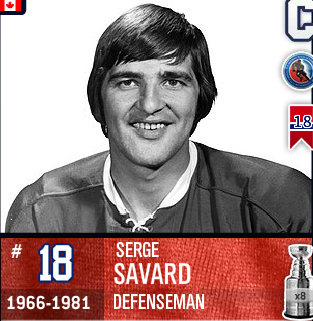 After looking at Larry Robinson in our last post, we move on to another of the greatest defensemen in Canadiens history. The creator of the "Savardian Spinorama", Savard was a smooth skating puck mover with incredible talent and instincts. A winner of 8 Stanley Cups, Savard was the first of the fabled "Big Three" to make the NHL. He also represented Canada in the 1972 Summit Series against Russia. he didn't play every game, but in the five he did play, Canada was 4-0-1. Savard never won a Norris trophy, but he did win a Conn Smythe Trophy in just his second full season in the league. Canadiens captain, Hockey Hall of Famer, and a retired number for the Canadiens, there's not much you can add to that decorated of a player, unless they go on to be the GM of the Canadiens, draft the greatest goaltender in league history, and win the two most recent Stanley Cups for the Habs. Quite the CV there, Serge. 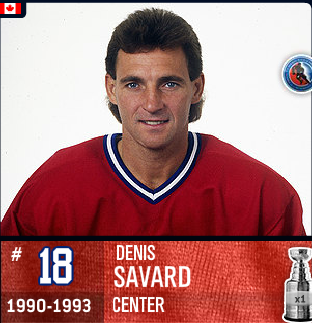 Also a Hockey Hall of Famer, Savard gained most of his notoriety away from Montreal. Passed over in the 1980 NHL Entry Draft by the Canadiens in favour of Doug Wickenheiser, Savard was one of the most productive players of the 1980's with the Chicago Blackhawks. By the time the Canadiens acquired him, he wasn't a 100 point player anymore. In fact he wasn't even a 100 point player, and would never score 30 goals in a season for the Habs, despite doing it 7 times in the 9 previous years. What stung the most though was that he was acquired in the trade that sent Chris Chelios away, as he would become one of the best defensemen in the league over another couple decades. Oddly enough, this Savard was acquired by the Savard a few inches up the page. Savard won the only cup in his career the last time the Canadiens lifted the silver chalice, in 1993.