Which Montreal Canadien Wore It Best: #19

The number 19 has been worn by fifteen players for the Habs in over a 100 years of history, but only two make it to this list. Who wore it better? Also to wear #19: Jean Bourcier, Tony Demers, Lou Fontinato, Bob Frampton, Fernand Gauthier, Terrance Harper, Burt Hirschfeld, Vern Kaiser, Albert Langlois, Bill Miller, Jimmy Peters, Charlie Philips, Gerard Plamondon, and Dollard St-Laurent.

Share All sharing options for: Which Montreal Canadien Wore It Best: #19 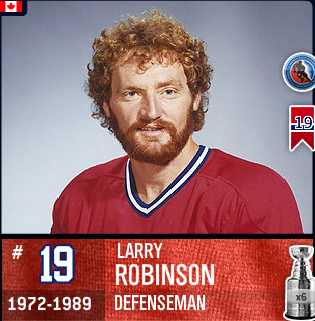 There's not much that can be said about Robinson that hasn't been said, although somehow he has managed to be underrated in the passage of time. Quite simply, Robinson was one of the greatest defensemen to ever play the game. A Conn Smythe Winner, and two time Norris Trophy winner, a 6 time Stanley Cup Champion, a Hockey Hall of Famer, and his jersey has been retired by the greatest hockey franchise, the Montreal Canadiens. Robinson was everything you could possibly want, big, mobile, intimidating, cerebral, offensively and defensively gifted. At 6'4" he was a giant in his time, think of a smoother skating, more offensively gifted, and less dirty Chara. That said, Chara isn't fit to hold Robinson's jock strap. Only Henri Richard played more regular season games as a member of the Habs than Robinson. Robinson is at the top of every leaderboard among Habs defensemen, and is close to the top everywhere including forwards too. His +700 career +/- is an NHL record. Robinson averaged 60 points a season in his 17 year Canadiens career. For a defenseman. His average was 60 points. 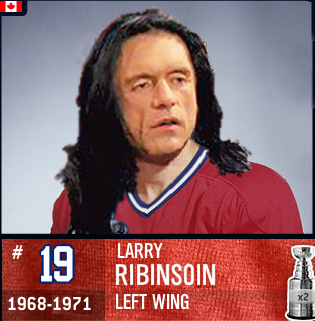 At first we here at EOTP thought there was no one fit to go against Larry Robinson in this contest. That was, until were reminded of Ribinsoin by this brilliant comment. Long confused with Larry Robinson, due to the uncanny physical resemblance, Larry Ribinsoin spent three full seasons as a left-winger with the Habs, registering a respectable 322 assists, before suddenly walking out on the team at the end of the 1971 regular season, controversially stating that the Montreal Canadiens organization was "making a huge mistake starting that moron from Corningware University in nets for the playoffs". After a couple of uneventful seasons with Flüurg of the Swiss Supra-Elite Hausliga, and marked by a rookie hazing mishap involving an abacus, Ribinsoin returned to North American pro hockey, signing on with the fledgling Alabama Angst of the WHA. Feeling the Angst had lost its fledge, Ribinsoin returned to Europe to take over the head coaching duties with Fluurg, which had traded away its umlaut the previous season for Swiss prospect Tk Vr. Nipples, as he was affectionately called by his Montreal teammates in reference to his unique skating style, continues to hold several Canadiens team records for all kinds of shit.