The 34 year old Czech was constantly derided by fans, partially due to his history as a Maple Leaf and winning a cup as a Boston Bruin, and partially due to visible mistakes. Where does the overpaid veteran fit in next year?

Let's get this dealt with to start off, Tomas Kaberle is overpaid. We all know that. However he isn't overpaid to the point where he's a negative impact on the team, like Scott Gomez. With two more years on his contract, with Kaberle still able to put up about a half a point per game, he can be traded if the team wishes to take that route.

As far as his play goes, Kaberle is a lightning rod for criticism. The mistakes he does make are highly visible, and his lack of physicality is easy to look to when criticizing his defensive play. Kaberle is by no means a top 4 defenseman, and he wasn't asked to be one in Montreal last season, even with a lack of second pairing for most of the season. As such he'll be judged as a 3rd pairing guy who's a powerplay specialist, not by his salary.

Kaberle was definitely not an even strength powerhouse. He was in the middle of the pack on defense for scoring chance differential, and he was heavily sheltered both zonally and in quality of competition. Only Yannick Weber was sheltered more than Kaberle.

That said, he put up close to even relative possession, which is nothing to sneeze at for a guy who's considered a defensive liability. What's most interesting to not is that once Kaberle was traded to the Montreal Canadiens, he was consistently above or at par with his teammate's possession. Given his sheltered role, this is to be expected, but it's still a positive sign for Kaberle as a useful player.

Kaberle is also still a point machine, provided he stays sheltered. He put up nearly a point per 60 minutes played at even strength last year, which was tops among Habs defensemen, although I expect both P.K. Subban and Andrei Markov to eclipse him there next season.

Most surprising about the constantly derided Kaberle, is that he posted an even +/- rating during his run with the Habs in 2011-12. He was a -6 when he was traded, and remained there to the end of the season.

On the powerplay is where Kaberle is really at home. He played more minutes per game there than any other Hab, and put up the most points per minute played among the Habs defensemen, along with the best Corsi of any Habs player. All that accounted for, he still finished 4th in scoring differential on the powerplay among defensemen (If you include Markov), slightly behind Yannick Weber. He did have the team's top powerplay risk/reward rating though, not counting Markov.

Kaberle has a reputation for not shooting enough, but compared to other Habs defenders, he shoots a bit more often than Diaz and Emelin at even strength. 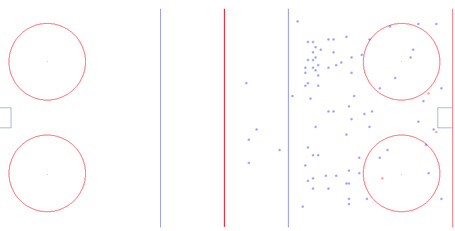 Can the aging Czech rearguard continue his point producing ways? Does Kaberle have a chance to be better than last season or is he going to be a strictly powerplay guy in the coming years?

Kaberle is definitely on the decline from a possession standpoint. He's gone from a guy who was putting up close to 55% Fenwick, to about 48%. His zone starts have gotten tougher over time, but they're still not tough. He was highly, ridiculously sheltered in Toronto as even strength zone time goes, and he may not be able to get that many offensive zone starts in Michel Therrien's system.

How about points? Well if Markov and Subban are both healthy, Kaberle's bread and butter, the powerplay, won't be as readily available. Sure he'll play some good minutes on the second wave, but he's no longer the go to PP quarterback on the Habs. Because of this, we're probably going to see a bit of a drop off in point potential for Kaberle. My projections have him at 5 goals and 30 assists for 35 points if he plays all 82 games.