Diaz was a little polarizing last year for the role he played, in the end he seemed underrated and possibly very good. How much can he contribute in 2012-13?

Like Alexei Emelin, Raphael Diaz had a bit of a rough start to the year as possession goes. That said, consistent usage by Jacques Martin, and Diaz kept his possession in line with his role, which started out in tough minutes. When his role got a bit easier, Diaz was around team average in possession for nearly 40 straight games. Not to bad for a rookie out of the Swiss league, especially since he was being used on the second pairing for most of that time.

After suffer getting sick with the flu, Raphael's play dropped off considerably, despite getting pretty easy minutes. Just as he seemed to hit rock bottom and begin to possibly rise out of it, he suffered one of those fabled 'lower body injuries' and missed the last 16 games of the season.

I was hard on Diaz this season, partly because it was obvious that at times he was playing out of his depth, but that's not his fault. I was also hoping that Emelin would get a bit of the consistent usage Diaz received, as the two rookie 26 year old defensemen seemed to have a different set of rules. Knowing that Diaz had more consistent usage though, he did have a better season overall than Emelin did. Emelin is more flashy, which likely lead to the extra $775K per year Emelin received.

Looking at Diaz's performance in a secondary tough minutes role, without being sheltered heavily in any area, I believe he can be an average possession player. We can likely write off his first 10 games as an adjustment period to the NHL, and although 40 games isn't a huge sample, the consistency with which he mirrored the team's overall possession makes me think that's about what we'll see from him in the future, which isn't bad for a guy who looks to be starting on the 3rd pairing next season.

Diaz had some great personal luck as far as shooting goes last year, leading the Habs defense in even strength goals per 60 minutes, but based on his shot rate, he should be down below players like P.K. Subban, Andrei Markov, Tomas Kaberle and even Yannick Weber in that regard next season.

Where Diaz needs to make headway is his decision making in handling NHL forwards. His sloppy play there at even strength lead to him taking nearly as many penalties as Subban, but he couldn't draw penalties to make up for it.

On the powerplay Diaz was good but not great, putting up 5th best possession and scoring chance differential among the Canadiens defense. With that said, he was a good powerplay decision maker, with the 4th highest risk/reward rating on the Habs while up a man. Diaz isn't a guy who can quarterback a powerplay, but if Yannick Weber can't crack the lineup, Diaz is more than capable of playing second unit powerplay time with someone like Kaberle, or even Emelin if he finally gets a chance there.

Where Diaz really shone last season was when the team was shorthanded. He didn't play a heck of a lot there, clearly on the second wave whenever he did take shifts, but he was excellent. He put up the 3rd best possession among PK regulars behind only Subban and Lars Eller, and the best scoring chance differential on the team, which tells me that he was blocking shots that would be considered scoring chances. Diaz also had the 3rd ranked risk/reward while down a man, slightly edging Tomas Plekanec. He is definitely a mainstay on the PK for next season.

Diaz's shot count was limited by his injuries, but here are his shots from 2011-12. 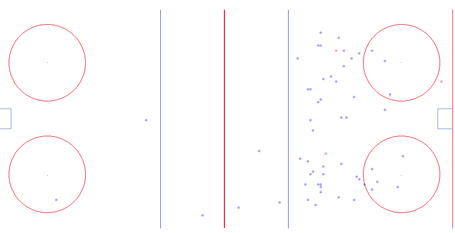 Continuing on with the rookies, I'll give you my usual note about how little we can tell about career progression from just one season. But here is Raphael Diaz's career thus far.

Due in large part to his initial tough minutes usage and injury to end the season, we get the impression that Diaz played worse as the season wore on in spite of getting easier minutes. While this may be true on the surface, having watched last season, and compared his play to the rest of the team above, we can see that it's not always so simple.

I have a feeling that Diaz isn't ever going to be a great option as a top 4 defenseman, but he could very well be a stud as a 3rd pairing guy. Say whatever you will about guys like him, Kaberle, Weber, and Francis Bouillon, having that many solid guys at the bottom of your NHL defense is a bonus.

Diaz put up a solid amount of points for a rookie with very little expected of him. I expect that trend to continue, and he's projected for 4 goals and 24 assists if he plays all 82 games next season.