Alexei Emelin was used very inconsistently, and while he showed flashes of excellence, his season suffered because of it. Can he grow into a top 4 defenseman?

Alexei Emelin is a curious case, as some things point to him being a fairly impactful player, while others point to him being very negative. Due in large part to his usage last season, which was horrid under both Jacques Martin and Randy Cunneyworth, Emelin experienced zero consistency outside of being continually denied a chance on the powerplay.

He played part of the season on the left side, then part on the right side. He was a healthy scratch at various intervals under both coaches, most notably at the beginning of the season under Martin after he showed up to camp out of shape. When he did play in the first quarter, he was pretty awful to boot. Adjusting to the North American game took awhile for Emelin.

When he did adjust though, he treated us to some pretty special play. Emelin was one of the only Habs players who actually got better after Gionta went down, although oddly enough he was still scratched multiple times while playing far above the team average. He also gave us awesome things like this:

There were worries when Emelin was first brought over that he would hurt the Canadiens on the penalty side of things because of his reputation as a dirty player in the KHL, but this couldn't have been more wrong. Emelin not only stayed away from the dirty hits, but he showed a lot of restraint all year, biding his time for retaliation in order to hit someone legally. This approach clearly frustrated his opponents, as he drew more penalties than any other Habs defender, even more than P.K. Subban.

Emelin actually managed the second best even strength possession of any Habs defender, although he played slightly easier minutes than Raphael Diaz and much easier minutes than Josh Gorges. Emelin also brought that solid (in comparison to the team) differential to scoring chances. He finished 3rd best among defensemen there behind only the top pairing of Gorges and Subban.

Splitting up the differential though, we see that Emelin was the second worst Habs defenseman for scoring chances against at even strength. I'm inclined to give him a bit of a break based on his inconsistent usage, but this is definitely an area of concern, or an area that can be improved.

Emelin makes big hits so people think he's a defensive defenseman, but that isn't really true. Emelin has some problems in the defensive zone, notably that he loses the puck in his feet more often than other players, and can get way out of position if he misses a hit.

His offensive game is certainly stronger than his defensive one at this point, despite some poor offensive numbers last season. One are that needs to improve for him to be able to generate some offense consistently is his passing. Throughout the year he had a very poor passing success rate. However putting him on a pairing with Andrei Markov full time may remedy this, as he would no longer be the depended upon puck mover. Playing with a player like Markov would allow Emelin to simplify his game a little bit, which is probably why he was at his best last season while paired with Tomas Kaberle.

Emelin didn't play a huge amount of time on the penalty kill, but his results there were encouraging. His risk/reward was still relatively low, but his possession and scoring chance numbers were both close to on par with Raphael Diaz, who was excellent on the PK. Emelin and Diaz could definitely form the defensive side of a solid unit on the PK behind Lars Eller and someone like Brandon Prust or Colby Armstrong, whoever Michel Therrien elects to use.

Emelin wasn't a big shooter last season, his 3.001 shots/60 at even strength ranked him 2nd lowest among returning defensemen after Josh Gorges, and an extremely limited amount of opportunity on the powerplay didn't help. 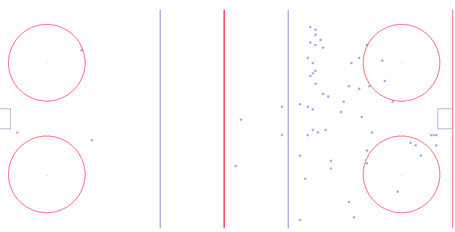 As with the other rookies we mentioned, we just can't glean much about career trends from a single season. Even so, I'll post the graphic for the sake of consistency.

What we can see from this graph is that as the season wore on, Emelin became much less sheltered zonally and his possession dropped in a less severe manner, which would suggest improvement on his part. By the end of the year, Emelin had begun to cumulatively outperform his zone starts.

There are obscurities involved though, as we know that under Cunneyworth the team gained the offensive zone less often, and therefore there was less of an opportunity to shelter anyone, and the possession of the team got worse as the year wore on. We can't really remove that noise from the graph at this point.

As for points, because we're only able to use Emelin's one rookie season, all we can do is say that he won't be a big offensive producer according to the numbers. He's not projected to be a factor there, but considering the lack of information involved, that could be wildly inaccurate. I would hesitate to predict more than 15 points for Emelin if he plays all 82 games.