Andrei Markov has been lacerated, beat up and broken for 3 years. He finally seems to be healthy, but can he stay that way and get back to his former dominant self? The Habs can't make the playoffs if he doesn't.

Disclaimer: I'm writing this basically because I want to write about Andrei Markov. With so few games played during the season, coming off of major injury which caused Andrei to miss nearly 2 years, there is almost nothing worthwhile to be gleaned from this season's information on him. That said, you're still going to read it because it's fun, and also because we all love us some Markov.

Andrei Markov has played just 20 of the last 183 Montreal Canadiens games, including playoffs. After several severe knee surgeries, there were questions about whether he would ever play another game. But Markov is a determined and motivated man, and he finally seems to be over the hump.

He was used in a sheltered role in his 13 games last season, getting as many starts in the offensive zone as the coaching staff could muster. As a result he outperformed the team greatly in possession.

There was visible rust though. Despite having relatively solid possession numbers, Markov had the worst even strength scoring chance differential on the team. He made some bad decisions at critical moments and got vicitimized, and his mobility will probably never be what it once was, so it will take time for him to get used to it. There is also the contributing factor that Markov only began his season when the Canadiens were at their absolute worst, so he doesn't have games played during the good parts of the year as a buffer for his scoring chance differential.

What hasn't changed for Markov is his vision. When compared to the rest of the team, Markov had the second highest risk/reward rating next to P.K. Subban at evens. His scoring chances for were also similar to Subban, albeit in a much more limited role, the main problem with Markov last season was the sheer number of scoring chances against.

On the powerplay it seemed like Markov didn't lose a step at all. He had the top risk/reward rating of any Habs player, and the best scoring chance differential by leaps and bounds. However, remember the small sample we're working with here. And partly due to that small sample, Markov's points on the PP didn't look as impressive as his play, he just didn't have enough time to start racking them up.

With the emergence of Subban and Gorges for the Habs, it's unlikely that Markov has to play top line minutes again. More likely Markov will be the anchor for the second pairing, auditioning partners like Alexei Emelin and Raphael Diaz during the season (if we have one). Their role will be to take secondary tough matchups, to be sure, but also to create offense, likely behind the David Desharnais line in large part at even strength. 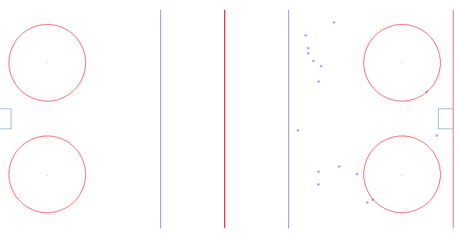 I'm not going to grade Markov for last season. He didn't play enough games for it to matter, and coming off of missing basically 2 years, I think it's unfair to judge his play at this point.

Even though Markov has barely played in the last 2 years, can we see where his career is trending? I'm not so sure, but we can at least look at the previous 3 years to see how his play actually was, and maybe see what we can expect.

Partially due to the myriad of knee injuries Markov has sustained in recent years, his zone starts have become easier at a rapid pace. This is of course greatly affected by a large gap in games played followed by this season's sheltered role, but it's probably something we will see continue. At 33, we shouldn't expect Markov to play very tough minutes for the rest of his career. He is not Nicklas Lidstrom.

His possession has also gotten better, and that's largely without the benefit of Jacques Martin's system, which was at it's best while Markov was down for the count. I don't think it's unreasonable to expect Markov, if he's healthy for good, to be a positive possession player who's slightly sheltered.

As far as points go, my prediction for Markov is pretty unreliable. Being forced to use data from several years ago to come up with anything worthwhile, so take it with a grain of salt. My projections have Markov putting up 12 goals and 37 assists for 49 points if he plays all 82 games.