Josh Gorges has gone from a depth defenseman to the top pairing in Montreal in the last 5 years, but is he legitimately that good, or was he riding Subban's coattails?

Josh Gorges had a very impressive season for the Habs this year. Overall he did finish negative on the Corsi side of things, even while playing with P.K. Subban. We can see in the graph in comparison to Subban's, Gorges's possession dipped at the same time as Subban, around when Brian Gionta was injured, but he took an extra 10 games to recover, and he dropped off quicker towards the end of the season due to tougher zone starts.

Gorges played the toughest minutes on the Canadiens in 2011-12, and the most even strength minutes on the team. Coming off of major knee surgery, playing with a stud like Subban no doubt helped Gorges out a bit, but he's no slouch. His improved skating allowed him to win more races to the puck in his own zone, and this season he didn't get manhandled in the corner like he used to. Maybe he got a lot stronger from his extended time off, or maybe it's a bit of veteran savvy, but Gorges is better than he used to be.

One thing to note about Gorges is large difference between his Corsi numbers and his other possession numbers. Usually when a player has a lot of blocked shots, we view that as a bit of a negative because it means that the other team has the puck in shooting position often. This is true of Gorges, he had negative possession numbers all around however only his Corsi was below the team average. Both his Fenwick and Shot% were above it. What does this mean? Well combining this with his positive scoring chance differential, the top differential on the Habs blueline, I believe it means that the blocks Gorges makes are disproportionately potential scoring chances.

Yes Gorges doesn't have the puck as much as you would want, but he, on his own, effectively limits scoring chances against. Obviously this may not be a consistent attribute, but last season, it was a trend. Gorges lead the league in blocked shots by a startling 51, but he was nowhere near the worst possession played in the NHL. In this context I believe his blocked shots number is very positive.

Gorges was used sparingly on the powerplay for a short stretch this year, partially in response to the high number of shorthanded goals against while using Tomas Plekanec on the point. We've talked before about how this was mostly due to circumstance, and that Plekanec was actually very good on the point, but using Gorges did have the desired effect. Scoring chances against on the PP went down remarkably, although so did scoring chances for. He's not a long term option for the powerplay, but he was surprisingly far from incompetent.

Gorges played 319.217 minutes on the penalty kill last season, the second most in the entire NHL behind Francois Beauchemin. He wasn't as dominant there as Subban was, but he was still very good against tough opponents.

Gorges shot less per minute than any other player on the Canadiens. Considering he played most of the year with Pacioretty, Cole, and Subban on the ice with him, shooting isn't very important for him to do anyway. Defense is Gorges' game, so as long as he can be a calming presence, his shots aren't a big factor in his ranking. 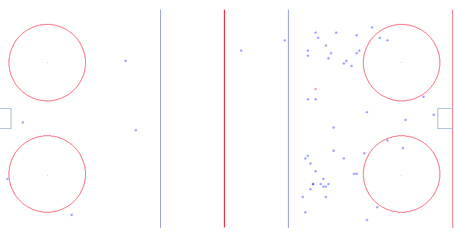 Gorges seemed to improve a lot this year over previous years. He's certainly a late bloomer as NHL players go, but is this the top? At 27 it's tough to imagine that he gets much better, but how is his career trending?

I've read a few times this summer that Gorges is overrated a bit by Habs fans, and this may be true in part. He's not likely a top pairing defenseman on his own, Subban makes him look a lot better than he is. However I think he's definitely a top 4 defender on most NHL teams, and his ability to jump into the top pairing with Subban allows Montreal greater versatility with their second pair, specifically they can put Andrei Markov against weaker competition to exploit some offense.

In the last two seasons Gorges has begun to outperform his zone starts. Part of that is due to his teammates because he's not a possession driver, but he's an impressive tough minutes guy that doesn't get killed in scoring chances.

As far as points go, Gorges is likely a non-factor for the most part. His career production fell short of what's predictable for my formula, but expect around 10-15 points from Gorges if he plays all 82 games.