Subban has been everything for the Canadiens in his short career, will his reputation finally catch up to his play this season?

P.K. Subban is the single most important player on the Montreal Canadiens. Last season he anchored the defense in all three situations, outperforming his peers by a landslide. When Subban is on the ice, teams focus on him constantly in an attempt to lessen his impact on the game. In his own zone, he's normally facing two forwards forechecking him alone. Yet in spite of playing the second toughest competition on the Habs, with the second toughest zone starts and second worst linemates among defensemen, Subban put up the best possession numbers by a landslide.

In addition to that, Subban had the best risk/reward rating on the entire team, a testament to both how involved he was in the play, and how startlingly successful he is against such tough odds.

In spite of leading all Habs defensemen in shots per 60 minutes, Subban has a poor shooting year. His 7 goals still lead the team's defenders, but we all know that he's capable of much more. Subban had just a 3.41% shooting percentage this year personally, compared to his first two pro seasons of 8.31%. We shouldn't expect him to consistently hit that high, but somewhere between 3.41 and 8.31 is likely his true shooting talent level.

Subban was also impacted by a poor powerplay, which prevented him from racking up points as you would expect a player of his talents to do. Subban still had the best scoring chance differential on the powerplay among defensemen on the Canadiens, and the 2nd best risk/reward on the team, slightly behind Tomas Kaberle. Perhaps most impressive though, is that in spite of Subban's reputation as a risky defender who takes too many chances, his chances against per 60 minutes on the powerplay were lower than any other regular on the Habs powerplay. This trend was similar at even strength, as he put up the fourth fewest scoring chances against after Josh Gorges, Lars Eller and Louis Leblanc.

Where Subban has been most impressive though, is a exactly where he was most skeptical of getting minutes when he was a rookie. I'm sure many of you remember Subban joking that we wouldn't see "P.K. on the PK" when he first joined the team, but he's developed there rapidly. In the entire league, Subban put up the 3rd best Corsi while shorthanded among defensemen who played over 2 minutes there per game. Unsurprisingly, he put up the 3rd best scoring chance differential there among all Canadiens after Lars Eller and the surprisingly efficient Raphael Diaz, and 2nd best risk/reward after Eller. Subban's dominant play on the PK also leads him to draw 1.2 penalties per 60 minutes, negating about 4 penalties per 82 games on his own.

Subban is the definition of an all around defenseman. He hits, scores, defends, makes plays, he's everything you could want in a player. His strength and speed make him hard to handle in every zone, and he agitates other teams into being stupid.

One criticism of Subban's game last season was that he may be a little bit too confident in his shot, and for that reason he shot from further away than is optimal. Here are Subban's shots from last season. 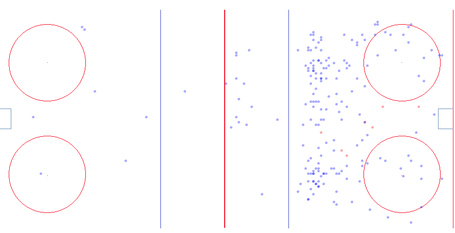 Have we seen the best of Subban as an offensive defenseman? His transition into a tough minutes role makes it far more difficult to produce at even strength, but at 23 he should still be growing, and some veteran savvy could help him get more of his shot attempts to the net, as he gets fewer than 50% there currently. Let's look at how his career has progressed.

From the get go we can see that Subban has outperformed his zone starts even as a rookie. He began his NHL career in a sheltered role and demolished teams at close to 70% Fenwick until Jacques Martin tossed him onto a pairing with Hal Gill to handle the tough minutes. Since then his overall performance has dropped, which is to be expected, but the gap between his role and his performance has widened, which is a great sign.

If Michel Therrien can manage a competent possession system, something he's never been able to do before, we could see a career year from young Pernell Karl. But how good can he be? Based on the projections I've come up with, even if Subban just breaks even in his play, he's in for a significant point improvement. Given that 23 is often an age for a breakout year for defensemen of Subban's caliber, as Kevin noted in his Top 25 Under 25 profile, I project Subban to score 13 goals and 38 assists for 51 points if he plays 82 games.