It's make or break time for Aaron Palushaj's NHL career. Can he force his way onto the Habs before he's overtaken by younger, better prospects?

It's tough to figure out what the Montreal Canadiens have in Aaron Palushaj. He's in that bubble right now where he has to make it to the show permanently soon or he'll be an also-ran on this team with many young prospects coming up. Looking at his AHL numbers, Palushaj is one of the best players in the American hockey league, but he's yet to translate that into the big league.

Palushaj was fairly consistently above the team's average possession, which lead to a ridiculous relative Corsi of 20. Not to take anything away from that, but Palushaj was heavily sheltered this year, which no doubt helped him out in that regard.

Although Palushaj struggled to get scoring chances through the first three quarters of the season, the Habs getting just 43.1% of the chances while Palushaj was on the ice, he made a huge improvement in the last 20 games of the season, the Habs getting 58.4% of the chances. That's a pretty intense improvement for a player to make while the rest of the team got worse. It could be that Palushaj was finally getting used to the NHL pace, and his scoring chances were catching up with his possession.

Is Palushaj about to break through and be a top 6 forward? That's unlikely, as he's never played even close to a tough role, but the goals may start to come this season. Outside of some increased scoring, Palushaj is also extremely useful as a bottom six forward simply because he draws so many penalties. No player on the Habs drew more penalties per 60 minutes of ice time.

Palushaj barely only 7.5 minutes per game this season, so take it with a grain of salt, but he shot more often per 60 than Rene Bourque, and by a fraction, a bit more than Louis Leblanc. It may be that all Palushaj needs to make the NHL full time is a legitimate shot. 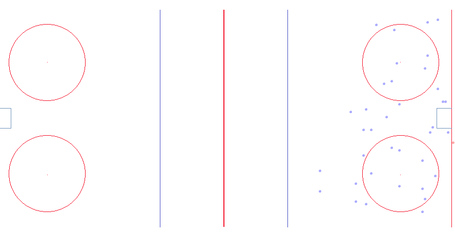 Like Leblanc, there's not much information to be gained from this graph. There's not enough time to have a proper understanding of where Palushaj's career is trending overall.

As far as points go, we can probably expect a similar production from Palushaj to what the formula predicted for Louis Leblanc, but as it stands that formula doesn't work well for a player like Palushaj to this point in his career. According to NHL Equivalency equations, Palushaj should put up 16 goals and 21 assists for 37 points over 82 games, but watching Palushaj play over the last year, I think we can all agree that this is an extremely, extremely unlikely scenario. In all likelihood we're looking at less than 20 points from Palushaj, he just won't get the opportunities to be a big scorer, he's not that guy.