Louis Leblanc was pretty impressive in his rookie season, especially considering he was coming off of shoulder surgery in the summer. Can he improve enough to make the team full time?

Louis Leblanc wasn't expected to play a single game this season for the Montreal Canadiens, as fans and media all speculated that he needed a year in the AHL after a mediocre scoring year in the QMJHL as a 19 year old and offseason shoulder surgery to boot. He didn't get a chance to impress during training camp as he was still rehabbing that injury.

Due to a litany of injuries to the team's wingers, along with a suspension to Max Pacioretty, Leblanc was called up to play his first game as a Hab on November 30th against the Anaheim Ducks. Most expected Leblanc to be sent down as soon as Pacioretty's 3 game suspension was lifted, but he impressed Jacques Martin with his typically cerebral game. His good decision making and incredibly impressive possession stats over his first 10 games shocked a great many fans. Leblanc ended up playing more than half the season with the Canadiens.

He couldn't keep up those possession numbers over time, falling sharply to around the team average. What was most notable in our 3rd quarter look at Louis was that despite negative possession he was looking great in scoring chance differential, the Habs getting 52.73% of the scoring chances while he was on the ice. This was while Martin was using him in the bottom 6, but that changed when he was put in the top 6 by Randy Cunneyworth to end the season.

Now this is one thing you can't blame Cunneyworth for. Leblanc was his most talented non-injured winger that he had left, but he just wasn't read to play the tough minutes he got with Tomas Plekanec and Rene Bourque. His scoring chance percentage went down to 44.12%, a huge drop.

Carey Price and Peter Budaj had Leblanc's back though, as he received a crazy 93.9% save percentage, which we can expect to drop next year. Leblanc did cash on his fair share of chances though, and ended up a +3 on the year, one of only two players not on the top line to have a positive rating (the other being Aaron Palushaj, who's up next).

One thing Leblanc can do better than most is shoot. With limited opportunity this year he still shot more often than any Hab not named Pacioretty, Erik Cole, Plekanec or Brian Gionta. Leblanc is a lot like Gionta in that he shoots from everywhere, almost using the strategy of spray and pray. He doesn't have Pacioretty's shot though, and as you can see, all his goals are within the scoring chance area. Here are all of Leblanc's shots in 2012. 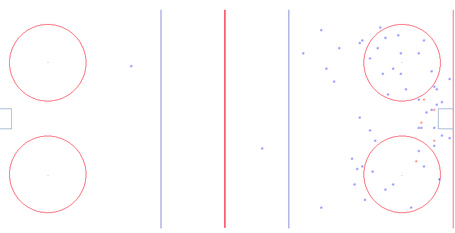 Unfortunately because Leblanc's career is so young, there's really not much we can learn from the graphs I've been putting up for the other players on this list. The same problem is present for Aaron Palushaj, Raphael Diaz and Alexei Emelin, but I'll put up the graphics anyway for continuity.

All we can really learn from this graph is what we already knew. Leblanc played phenomenal when first called up, and declined with the rest of the team to about average as he was foisted into a role he wasn't ready for.

But how will Leblanc fare as far as points go? Well this is another problem for young players. Without several seasons for a proper sample, it's near impossible to accurately predict. My formula put Leblanc up for 11 goals and 13 assists for 24 points if he plays 82 games. You'll note that this is a very, very slight improvement over his pace from last year, and I believe he has more to offer, but predicting his output at this stage in his career is just a fool's game.