Gionta had a rough year, derailed by multiple injuries. Can the captain bounce back to the ~30 goal scorer he was with the Habs the previous 2 seasons?

Brian Gionta is a pretty unique player. He's by no means an elite point producer, but the guy just bites off more than you think he could possibly chew and comes out looking pretty good. Judging by how he skated last year, there were a lot of assumptions that he suffered a groin injury in training camp. Be that as it may, Gionta was given a much tougher role this season than his previous two, and before his official "lower body injury" he was maintaining quite the impressive performance.

There were some personal drawbacks, namely that Gionta's shot rate slipped from the 11.182/shots per 60 of the previous two seasons to 8.245 this year. However we don't have a lot of games to judge by, so he may have brought that number back up. We just don't know.

What we do know is that Gionta was negative in scoring chance differential, however his share of scoring chances while on the ice was 47.2%, which is higher than what would be suggested by his Fenwick % of 45.8%. His line's talent seemed to outperform the line's possession, which is never a bad thing. He also managed an overall positive relative Corsi score, when the team was actually good. That's pretty impressive considering the kind of minutes he was playing. Of Habs regulars last year, only Tomas Plekanec and Petteri Nokelainen had tougher zone starts.

One place Gionta was his regular self was on the powerplay. The bull terrier he is, he managed the best scoring chance differential on the team after Max Pacioretty. Although he played almost entirely under Jacques Martin, when the powerplay was actually producing chances, so this may be inflated.

Gionta's underlying numbers while shorthanded aren't as encouraging. Maybe it was due to the supposed lingering injury, maybe it was the added stress of tougher minutes, but Gionta bled chances on the PK. His 40.32 chances against per 60 minutes were the worst on the team, and his differential of -34.27 also last. Now maybe in a small sample like we're dealing with, we can't see the truth of the matter, but with the information we have available, if Gionta continues to play the tough minutes with Plekanec, in my opinion he should be taken off the PK. The Habs have a lot of options there now, no need to wear down the captain's body.

Gionta has a reputation for spraying shots from everywhere, and even with his few games played last year we can see that he shoots from far out a fair amount, usually slappers I'm guessing. However he crashes the net with great frequency and gets a ton of shots in close. 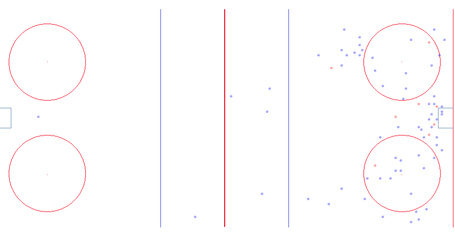 What's left in Gionta's tank? Should we assume that after two back to back injuries that he's not going to be able to get back to full health? Is he set to fall in the elevator shaft like Gomez did? Let's take a look at his previous five seasons with the Montreal Canadiens and New Jersey Devils.

Surprisingly, Gionta seemed to thrive as soon as he joined the Canadiens. It's only in the last 3 years that he's begun to outperform his zone starts, and while his possession performance has gone down from about 55% to 52.5%, his offensive zone starts have gone from about 56% to a hair above 50%. It's tough to pronounce imminent decline with performance like that.

Assuming, and it's a big assumption, that Gionta can get back to his previous two seasons in shot production, my projections have him hitting 30 goals and 19 assists for 49 points if he plays 82 games.