Erik Cole is set to turn 34 in November, but he's also healthy for the first time in his career. Can he possibly repeat his career year?

Erik Cole had a slow start to the season, as is his custom, and tapered off at the end of the year like the entire team did when the games stopped mattering (although despite weaker possession Cole never stopped scoring). Between that time however, he game us 50 games of beastly production combined with dominant possession in a sheltered role.

Before signing with the Montreal Canadiens, Cole had played a tough minutes role on the Carolina Hurricanes. Originally we thought he would be doing the same thing here with Mike Cammalleri and Tomas Plekanec, but after his slow start Jacques Martin put him on the exploitation line with David Desharnais to get him going. And damn did it ever work. Cole set career highs in goals, powerplay goals and shots at the age of 33, and tied his career high of 61 points, albeit in 10 more games.

Cole's 35 goals are the most this team has seen from one player since Alex Kovalev in 2007-08. He and Max Pacioretty are the first time the Habs have had two 30 goal scorers on the same team since Pierre Turgeon and Vincent Damphousse in 1995-96.

The previously injury prone Cole was also one of two Habs to play every game last season, along with Josh Gorges. Cole has now made it two straight seasons without missing a game, the first two of his career.

Only Pacioretty outproduced Cole at even strength, however Cole's more prolonged stint on the exploitation line with easier matchups lead to him producing more scoring chances than any other Habs player, and among regular forwards he had the second fewest scoring chances against per 60 minutes played. Cole somehow had a low risk/reward rating through all of this, although I think that may be because he tries riskier plays, for example to gain the zone, which have a lower success rate overall but when they are successful, create very good scoring chances.

After a few years lacking in powerplay success, Cole shot the lights out this year. Although somehow, he managed to go the whole year without a secondary powerplay assist. His scoring chance differential on the powerplay was 3rd on the team behind Pacioretty and Brian Gionta.

Unlike Mac Pacioretty, if NHL.com's data is even remotely reliable (there's a lot of evidence that it isn't), Erik Cole does a lot more picking of his shots. He shoots a lot, but perhaps because he's not as confident in his shot as Max, or maybe it's a bit of veteran savvy, he shoots from closer in. 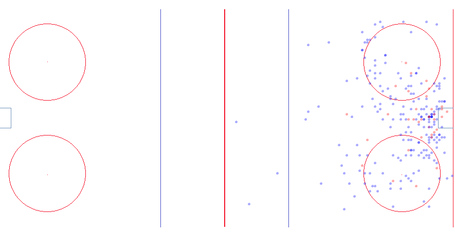 Cole is coming off a career year, can he possibly repeat it? Using the same system we've been using all along, let's examine the last 5 years of Cole's career.

Due to a two year period from 2009-2011 with the Hurricanes where Cole played extremely tough minutes, we get a line that trends to a tougher role and his possession is trending at a decline at almost the exact same rate. Having gone through several of these graphs now, I find it extremely interesting how often a player's Fenwick % and Zone Start % trend in a near identical way. Due to his age, it's believable that Cole could begin to decline soon, however playing in a sheltered role like he did last year could prolong his effectiveness to the end of his contract. I say could because there are obviously no guarantees, but Cole was so good last year that it's hard to believe he's about to drop into an elevator shaft.

So what about points for next season? Well Cole hasn't been a consistent powerplay scorer in his career, so it's unlikely that he hits a career high there again, and he did get some nice shooting luck overall, so goals should go down a bit. Using the projections I've created, Cole should produce 26 goals and 35 assists for 61 points if he plays all 82 games.

And just for some fun, how about some Cole videos?