Travis Moen has been a sacrificial lamb as far as quality of competition goes, and he's provided value for the Habs for 3 seasons. Can he do it for 4 more?

Moen plays a special role with the Montreal Canadiens. He gets very few offensive opportunities and plays very tough competition. In doing this, he's not expected to have good possession numbers. He's not expected to score (although he did that quite a bit last year). What he's expected to do is minimize damage while he's on the ice, so the rest of the team gets easier minutes. This is why Travis Moen was given a 4 year contract as a bottom 6 forward.

So Moen's entire game is centered around not losing too much ground. How did he do? Rather well actually. Partially because of an absurdly high personal shooting percentage of 20%, Moen managed a solid -2 rating in his tough role, and he managed a slightly better scoring chance differential than Tomas Plekanec.

Moen rode the percentages offensively last year so expect some regression offensively, but his defensive game should be fine. Moen may be set to play alongside Lars Eller again this year, and the two of them played off each other very well in the limited time they had last season.

That said, injuries forced Moen to be over-utilized last season and he didn't have quite the effect on preventing scoring chances at even strength that he usually does. In fact his percentage share of the scoring chances was the exact same as his Fenwick percentage at 46%.

On the penalty kill Moen was his usual self. His scoring chance differential was second among forwards to Eller, narrowly edging Plekanec. Moen has formed a formidable duo on the PK with Plekanec for 3 seasons now, and their effectiveness is unlikely to wane any time soon.

Moen doesn't shoot a lot, and his shot is nothing to write home about. However his wrecking ball strategy of crashing into the net pays dividends for him. Once in awhile he even sheds his hands of stone and pulls off a good move that makes you wonder why he doesn't score more. 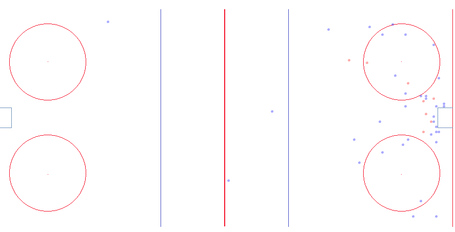 Can Moen repeat the offensive surge he had last year? Can he still play tough minutes after his mysterious upper body injury that ended his season? Using the method we've covered before, let's find out.

Now that is interesting. 30 year old Travis Moen has been improving as a player while his role has become more difficult. An encouraging sign after seeing that 4 year extension he signed. This trend probably won't last very long, but the important thing is that he isn't in a stage where he's declining rapidly and unable to perform the job he's given, yet. Seems like Bergevin et al did their homework on this one.

Due to impossible to sustain percentages, Moen is in for some heavy regression this year, which means there's no way he matches last season's pace. However he should still be a solid offensive contributor considering his skill set, enhanced by most likely spending a lot of time on Lars Eller's wing. My projections have Moen down for 8 goals and 13 assists for 21 points if he plays all 82 games.