Rene Bourque is coming off of a disastrous year, and is set to miss any hockey games played before December. Can he bounce back?

I'm not one to defend Rene Bourque. I despise the trade with the Calgary Flames that brought him here and I'm not a fan of his game, but I'm starting to feel sorry for the guy. Last year he was horrendous. There are no two ways about it. He was a possession black hole, playing a role he clearly could not handle. Add to that that he received below average goaltending and his teammates shot below average as well, and you have the perfect storm for the crap season that he pulled off.

He shot at his lowest per game rate since 2007-08 with the Chicago Blackhawks, before he'd established himself as a top 6 forward. He was undisciplined and couldn't draw penalties to make up for it, and he had the worst risk/reward rating on the Montreal Canadiens, worse than Michael Blunden.

As if the collapse at even strength wasn't enough, the previously versatile Bourque was entirely useless on special teams. Bourque had the worst scoring chance differential on the powerplay by a very wide margin, nearly 7 scoring chances per 60 worse than any other Habs player, and just over 11 behind the team average.

Shorthanded situations were more of the same for Bourque, nothing really going his way. Brian Gionta and Petteri Nokelainen put up worse differentials there, but Nokelainen should be worse than Bourque at everything, and Gionta was playing injured for all of last season. It's important to not that these terrible numbers came while playing with Tomas Plekanec and Lars Eller on the PK, two players who are absurdly excellent there. According to Olivier Bouchard's splits, he was actually okay with Eller, but with how excellent Eller was I wonder how much he actually contributed.

One thing didn't betray Bourque last season, and that's his shot. His shot is still plenty dangerous and he can score from a distance. He's not dangerous like Pacioretty or Cole, but he can rip 20 goals even in a poor season. Even with everything working against him last season he scored 18, remember. Bourque also has a nose for the net, with a nice cluster on the right hand side of the crease. 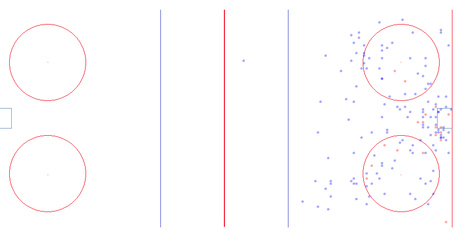 So what can we expect Bourque to do this season? His underlyings are terrible but there are legitimate signs that he could improve there with an easier role, and that he's due for some nice regression to the mean on the percentages. How is his career trending?

Bourque's performance has gone down at an almost identical rate to the difficulty of his role over the last 5 seasons. So it's possible he could excel if placed in a sheltered role with David Desharnais next season.

Unfortunately after this nightmare season, Bourque suffered an abdominal injury late in the offseason that required surgery, which will keep him out of action at least until early December. Worse than that, according to a few former hockey players, an injury like that pretty much ruins your season because of the lingering effects. So even though some bad personal and team luck seemed to point to a bit of a rebound season for Rene, that's now fairly unlikely.

Regardless, I can't really factor that into my points projections, so Bourque is projected for 24 goals and 14 assists for 38 points if he plays 82 games next season. We know this isn't going to be possible, but the points and goals per game rate should hold if he can fully recover from surgery.