Can Max Pacioretty improve on his career season? Can he transition smoothly to a tough minutes role?

The most striking thing about looking at Pacioretty's charted possession to me, was that while his performance ebbed and flowed like any other player, he was below the team average rolling performance for just 5 games this season. Five games out of the 79 he played. Two of which were coming off his suspension. When compared to his team, Pacioretty's possession metrics are outstanding.

Pacioretty faced tougher competition by both opponents and zone starts than his linemates as he spent some time in the second quarter of the season playing tough minutes with Tomas Plekanec. However Pacioretty still had the 4th highest offensive zone start percentage among forwards. Erik Cole and Pacioretty were the most tightly checked Montreal Canadiens forwards by opposing defenses according to Eric T's time on ice quality of competition.

Max also managed to put up nearly 4 more shots per 60 minutes than the next best Canadien, Brian Gionta. He is a scoring chance and possession machine, and to go along with it put up the second best even strength risk/reward rating among all Habs forwards.

He was unable to get the goals flowing on the powerplay last season in spite of the best scoring chance differential of any Hab not named Andrei Markov. Unsurprisingly, Pacioretty also had the second highest powerplay Corsi on the team after Tomas Kaberle. Similarly only Desharnais and Plekanec put up better risk/reward ratings.

Max is a shot machine, and his quick release and shot power allows him to score from all over the place. Unsurprisingly then, he doesn't pick his shots very much. 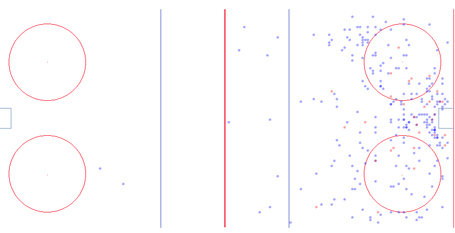 Is Pacioretty trending up even further? Even with a remarkably reasonable contract extension and a modest salary this year, expectations have shot through the roof for Max. He's the engine of the Canadiens offense at forward and their strongest possession player.

15 games before he was brutally attacked by a neanderthal last season, Pacioretty had begun the transition from a highly sheltered offense only role, to a two way, secondary tough minutes kind of role. He kept at that this season and continued to impress. As Pacioretty has proven he can handle the secondary tough minutes role, I wouldn't doubt it if he was transitioned onto Plekanec's wing next season to form a new top line, spreading scoring throughout the lineup.

Pacioretty experienced some bad luck on the powerplay, and the powerplay was less effective than it should have been considering the personnel available. Because of this I believe Pacioretty can continue to improve even while playing a tougher role, especially with the upgrade in even strength effectiveness Plekanec represents over Desharnais.

Pacioretty's continued development should lead to his 23 year old season being his best so far unless something unpredictable happens. Based on my formula, Pacioretty is headed for a 37 goal and 38 assist season for 75 points if he plays all 82 games.