I've been ragging on Petteri Nokelainen all season, and not without good reason. He's not overpaid or anything, we didn't give up a great deal to get him, he's just not an NHL player. Nokelainen had tough zone starts, but his opponents were as weak as any coaching staff could hope to match him against. Yet his scoring chance differential was the second worst on the team of anyone who played more than 20 games, outdone only by Rene Bourque.

Similarly, his possession numbers last year were awful. Second last in Fenwick % to Bourque again, and dead last in Corsi %. He isn't a great decision maker either as his risk/reward rating was the third worst on the team. Production wise he ranked third last amongst players who played over 20 games, narrowly edging Blake Geoffrion and Michael Blunden.

Special teams are no saving grace for Nokelainen. Of the regulars on the penalty kill he had the worst possession, the worst scoring scoring chances against per 60 minutes, the worst scoring chance differential and the lowest risk/reward rating. Frankly I fail to see why Marc Bergevin signed this player, as basically any other player in the NHL could replace him. Nokelainen brings nothing to the table outside of a minor faceoff skill, which doesn't end up helping because he loses possession so quickly.

Very few shots overall give us a small sample to work with, but it seems like for the most part Nokelainen is a shoot from anywhere kind of guy. He has a small cluster in front of the net, then an even spread all over the offensive zone. 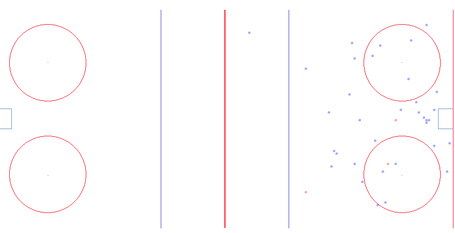 Should Nokelainen remain on the Habs roster or is he bound for the waiver wire? Let's see how he's looked in his last 4 NHL seasons.

Surprisingly, especially to me, Nokelainen has actually been getting better while his role has gotten tougher. Remember what I said earlier on though, these are proxies and omit things like quality of competition. Nevertheless, Nokelainen is younger than he seems at 26, and could possibly improve a bit.

That said, the potential of offense Nokelainen can generate didn't meet the threshold where it was worthwhile to project, which means he will have under 20 points per 82 games. I would wager under 15 points is also a safe bet.