Scott Gomez is overpaid, we all know it and no one denies it, but he's still an effective NHL player. Even at his worst.

Perennial scapegoat, outrageous cap hit, and annual goal scorer; Scott Gomez is probably still going to be wearing a Montreal Canadiens jersey when hockey resumes this year. Gomez is a confusing player, because everything about the year before pointed to a bounce back season. Clearly he was derailed a bit by injuries, but that huge drop when he came back from his second injury is a scary looking thing. Gomez's game has always been defined by possession, if he can't do that anymore, he's not of much use. That said, the team was clearly much better with him in the lineup than when he was out of it. Every high point in the season came with Gomez on the ice, not in the pressbox.

It is also worth noting that Gomez's collapse came during Cunneyworth's regime, and his forced dump and chase game is the antithesis of what Gomez brings as a hockey player. It's possible that Cunneyworth's system exacerbated the problem presented by a declining, injured Gomez and made him look worse than he actually is. Then again, maybe I'm too used to finding excuses for ol' Gomer.

Gomez was about as sheltered as you can get last season, and still couldn't get his game going. There are still some positives about Gomez, he produced scoring chances at a higher rate than any forward not named Erik Cole, Max Pacioretty or David Desharnais. He also had the third best risk/reward rating among forwards behind Lars Eller and Pacioretty. The trouble becomes whether he can translate these strengths into goals, and as time goes on Habs fans have less and less faith that he can, and you can't blame them.

Gomez got a bit less powerplay time than he's used to last season, although likely still more than he earned. The trouble there is that he didn't do anything to write home about other than scoring a couple goals, which isn't something he can be counted on to repeat. His scoring chance differential on the PP puts him outside the top 6 forwards.

Gomez's limited playing time meant he didn't shoot very much last season. Surprisingly however, he did get his fair share of personal scoring chances. He probably should have had a couple more goals, even with his horrible shot. He also has a cluster of shot from the left wing just past the blueline where he must have been looking for rebounds. 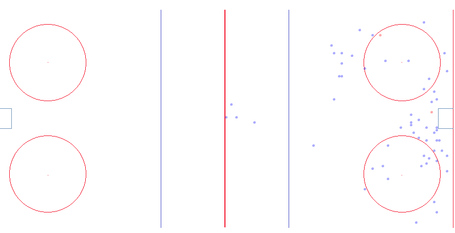 What can we expect from Gomez if he plays for the Habs, or even in the NHL next season? Can he recover to the form he had two years ago? Is he going to be the NHL's first $7.4M 4th line center? Let's see how his recent career looks using the proxies we've discussed before.

I think we all knew this was coming to an extent, but this is not encouraging. Gomez's role has been getting easier over time, and his performance is getting worse. It seems pretty clear that he's in decline according to all the stats now. Always the guy who was vindicated by the advanced stats, Gomez is looking mighty abandoned. What's even worse is that the possession monster and tough minutes forward that we've been told for years that Gomez is, hasn't really existed for the last 5 years. Gomez hasn't outperformed his zone starts over the last 5 years, and his role has always been a sheltered one.

It's incredibly unlikely at this point that Gomez passes Tomas Plekanec, Lars Eller, or David Desharnais on the depth chart, so if he does play for the Canadiens it will be as the 4th line center (barring injury of course). I'm sure no one on the planet wants a 4th line center getting paid like Gomez, but the cap hit is there anyway, so playing him over Petteri Nokelainen on the 4th line should be seen as an upgrade. It's possible that Gomez could center one of the best 4th lines in the league if he plays between Moen and Prust. Yes, that's damning with faint praise.

Due in part to a decreased level of competition, but also due to some regression two seasons in the making, Gomez should have a bounce back year of sorts and score 9 goals and 21 assists for 30 points if he plays all 82 games.