Eller has grown defensively and offensively by leaps and bounds the last two years, but can he finally break out as a playmaker?

There aren't many players that come to a franchise under more scrutiny than Lars Eller did. The only piece of the Jaroslav Halak trade that actually matters for the Montreal Canadiens, Eller was seen by many as simply not enough.

A second year of distance away from the 2010 playoffs and the criticism has died down a bit, partly due to Eller's rapid defensive development as a shut down force at even strength and on the PK. Some of the criticism of Eller's offense has been quieted by his 16 goal season with almost no powerplay time and horrible linemates. Linemates could be why his lauded playmaking abilities coming out of the AHL haven't yet developed at the NHL level, but unfortunately he's unlikely to get big upgrades there this season, stuck behind Plekanec and Desharnais on the center depth chart.

As you can see, Eller was a very solid possession player for the first 35 games or so, where he had semi-consistent linemates in Andrei Kostitsyn and Travis Moen. Together, that line took the second toughest checking assignments after the Plekanec line, until Martin was fired and Cunneyworth upgraded them to the 1st checking line, which resulted in a huge possession around game 40, which the line nearly recovered from until Moen was injured and Kostitsyn was traded, leaving Eller with linemates like Michael Blunden and an overwhelmed Louis Leblanc.

Eller didn't get much time on the powerplay but the time he did get he made count with the second highest goals/60 on the team behind Erik Cole, and the 4th best risk/reward among forwards. Overall Eller by no means looked like a powerplay ace, but of the current crop of forwards the Habs have, he should definitely be a regular on the second wave.

Where Eller really shone this year though, was on the penalty kill. His -56.41 Corsi was second best in the entire NHL among those who played at least 1.5 minutes per game on the PK, and the extent to which he pushed the puck up the ice from his measly 3.2% offensive zone starts is astonishing. Eller was also a constant threat to score while a man down, producing more scoring chances per 60 than any other Habs player while on the ice. His scoring chance differential was also better than any other Habs penalty killer, aside from the surprising Raphael Diaz. Unsurprisingly, Eller's risk/reward rating on the PK was higher than any other Habs player by a significant margin.

Lars isn't exactly a big shooter, but he could get there at some point. Currently he's still shooting nearly twice as often as Desharnais. Eller isn't shy about going to the net, but after having worked on his shot last summer, his wrist shot was a lot better this season and he also likes to shoot from the high slot, often picking a top corner. 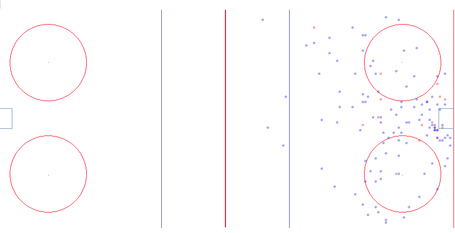 What can we expect from The Great Dane next season? Can he break through as a tough minutes player and assert himself as a top six forward? Using the previously outlined method, we can see how his career is trending.

We can see that Eller's performance has diminished as his role got tougher, however the trend lines are getting closer together, which hints that in the next season or two, Eller should begin to outperform his zone starts. This would put him close to Plekanec territory if his competition continues to get tougher. It's worthwhile to remember that Eller was just 22 last season, so growth should be expected.

Eller is clearly being groomed to be the heir apparent to Tomas Plekanec, but with the players ahead of him on the depth chart, and Galchenyuk likely to overtake him quickly, his opportunities for offensive ice time (especially with good linemates) come few and far between. Eller is also fairly ineffective on the wing, so that's not a great option to stimulate his offensive game.

Because of a lack of opportunity, most specifically in regards to the man advantage, Eller is unlikely to be a points machine next season unless there's an injury to another center. I have Eller projected for 15 goals and 18 assists for 33 points if he plays all 82 games. Luckily the contract Marc Bergevin signed Eller to will allow him to develop without much pressure over the next two years.