David Desharnais had a dream season last year. Can he possibly repeat it?

How many players have raised their profile to the extent David Desharnais has in the last 5 seasons? Desharnais has gone from a 20 year old who couldn't even convince an AHL team of giving him a full time spot, to his first 60 point NHL season.

Desharnais was one of only 5 Canadiens regular forwards to have a positive relative Corsi score, which by and large was due to his linemates, but considering the sad sack possession squad we had last year, it's still impressive. His line's possession dropped hard toward the end of the Cunneyworth era™, but maybe due to shot accuracy or maybe due to better positioning, or maybe due to picking his shots, the team's share of the shots that hit the net while he was on the ice was way higher than his overall possession. The team's share of scoring chances while Desharnais was on the ice was a similar 53.0%.

Possession metrics are proxies for performance, and the larger samples of Corsi and Fenwick are considered more sustainable than straight up shots. However what you're trying to find with them is essentially performance, and scoring chances are a better indicator of that than Corsi is, in my opinion. So the question for Desharnais is, which stat is more indicative of his talent, the possession or the scoring chances? I don't know if we can say definitively.

To help Desharnais achieve those impressive scoring chance numbers, the coaching staff set him up with the 3rd toughest competition among centers, only Scott Gomez and Petteri Nokelainen were given easier opponents. Desharnais was also sheltered zonally, but that trend lessened throughout the year. No Montreal Canadiens player was given better linemates to help them out than Desharnais was, with the 14th highest Corsi relative quality of teammates in the entire NHL.

Desharnais also rode the percentages a fair bit with 34th highest on ice shooting % in the league. Whether that is a sustainable number has been argued quite well by our own Stephan Cooper at A Winning Habit, but the trend is for that to regress a little bit. All this said, it would be tough for Desharnais to reproduce this season

On the powerplay Desharnais has proven to be excellent. No Canadiens player produced anywhere close to his near 4 points, or his 1.86 primary assists per 60 minutes of powerplay time. Only Max Pacioretty and Brian Gionta had better scoring chance differentials. His risk/reward rating was also 2nd among Habs forwards on the powerplay, behind only Tomas Plekanec.

Desharnais was often used to start the last shift of a penalty kill in order to have a pushback offensive shift right away. He was especially useful if the last few seconds of the PK started in the offensive zone, which allowed him to generate offense right away. This lead to some absurd possession numbers on the PK and an amazingly low number of scoring chances against.

Desharnais isn't a high volume shooter, but last year he didn't have to be due to the shot numbers of his linemates, and the opportunities they provide by creating havoc in front of the net. That said however, Desharnais seems to be truly fearless and can battle down low very well for someone of his size. 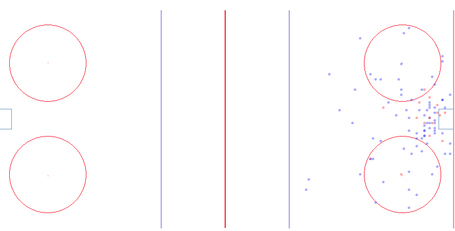 What can we expect from Desharnais next season? Is he going to top last year and produce at an even higher rate? Can he continue to improve his possession? Using the method I outlined in the review for Plekanec, we can look at his career trend, however it's far shorter and less informative than Plekanec's.

What we can see is that Desharnais doesn't outperform his zone starts very often, and as he's been exposed to tougher roles his performance has gotten worse. It's a shaky conclusion, but I think what we're seeing here is that Desharnais isn't likely to develop much further as an NHL player. This isn't a knock on him however, remember that he scored 60 points last season. He may not hit that high water mark again, but he should be an effective point producer and powerplay guy for years to come if he's given an exploitation role.

There's also the possibility that he could look even better if he shifted to the wing, which would suit his defensive play a little bit better.

So ideally Desharnais will be used in a softer minutes role to produce offense at even strength and on the powerplay. Using the formula I discussed last time, Desharnais won't equal his output from last year, but he will put up a very respectable 16 goals and 35 assists for 51 points if he plays all 82 games.