There have been a lot of people thinking that the time of Tomas Plekanec as the #1 center of the Montreal Canadiens is coming to an end with the emergence of David Desharnais last season. Let's just squash that notion right away, because Desharnais can not do the job that Plekanec does. Plekanec takes tougher competition than any other forward, he starts in the offensive zone less often than any other forward in the top 9, he played with linemates who couldn't hold his jock strap all season, and he still outscored Desharnais while accumulating just 8 fewer points. Is 8 points enough to put Plekanec on the trade block? Not to any rational hockey mind, I'd wager.

Last year was the first time since 2005-06 that Plekanec has failed to hit the 20 goal mark, even though he put up about as many shots as he averaged the previous two campaigns. In fact Plekanec had a shooting percentage 3.19 percentage points lower than his career average.

Plekanec's possession numbers were not inspiring this season, below the team average in every respect. That said, he was doing the hardest job of all the forwards, and pulling a lot of dead weight in doing so. It can't be overlooked that even with below average shooting luck, while getting outchanced, outpossessed and outshot, Plekanec was still a neutral factor at even strength. He still had the 3rd highest risk/reward rating among forwards. In some ways this could be seen as the worst year of Tomas Plekanec's career at even strength, yet he still got the job done. I've always been a fan of Plekanec, but my respect for him grew by leaps and bounds in 2011-12.

On special teams Plekanec has always been a stud, and while he was bumped down to the second powerplay unit for much of the season, he was the best thing going about the second unit, often the only forward generating offense. The team gave up slightly more scoring chances against than average while Plekanec was on the ice, but he was above average by a lot more in creating scoring chances.

On the penalty kill Plekanec came into the season as the best shorthanded player in the NHL. Plekanec took the first wave of every powerplay and played nearly twice the minutes, but Lars Eller's spectacular season was possibly a little bit better. It's hard to tell because both of them were absurdly dominant there. Plekanec was a constant offensive threat on the PK, which makes powerplays have to adjust to his presence. He even scored a goal down 5-on-3 in the last game of the year against Toronto.

Below is all the shots Plekanec took in all situations last year. Blue is a shot, orange is a goal. Note the particular density of shots from close to the net, which should dispel any notions of Plekanec being a perimeter player. 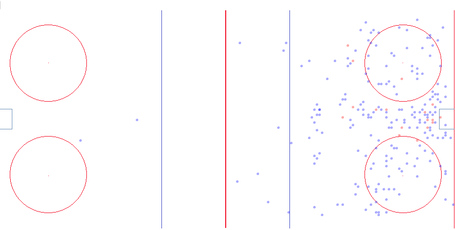 What can we expect from Plekanec next season? How is his career trending? Luckily with the data we have available today, we can chart the last 5 years of Plekanec's career and find out. Using Fenwick % as a proxy for performance, and offensive zone start % as a proxy for difficulty of usage, we can use data from every single game Plekanec has played since 2007-08 to build rolling 10 game averages and find a career trend from them. In the graph, the higher the red line goes, the easier the job Plekanec was asked to do. The higher the blue line, the better Plekanec's performance.

You can also see last year's performance relative to the rest of his career, as I've place the y-axis at the beginning of last season.

Please click the image to zoom in and see the chart in greater detail.

What we can see from this chart is that Plekanec has never been an elite possession player, so perhaps it is unfair of us to expect it from him. However he has played on poor possession teams his whole career outside of about 100 games under Jacques Martin from 2010-11 to the first 20 games of this past season. What's most encouraging however, is that while Plekanec's possession numbers have very gradually decreased while his role has grown progressively more difficult, and his possession has now outperformed his zone starts.

So we can expect Plekanec to continue to excel in a tough minutes role, but what can we expect from him in regards to points? Well it just so happens that I developed an app this summer to predict points for fantasy hockey, and using that formula, which I will keep private for obvious reasons, Plekanec should rebound next year to 25 goals and 38 assists for 63 points if he plays 82 games.