Carey Price passes the torch of the Canadiens #1 player under the age of 25 to P.K. Subban. Be his to hold it high.

All hail the new king!

After two seasons of being runner-up to Carey Price, P.K. Subban inherits the top spot in our annual Top 25 Under 25.

In just his second full season in the NHL, Subban demonstrated that he will be the workhorse of the future for the Montreal Canadiens' blue line. With Andrei Markov's return to the lineup in the 2011-12 season delayed until it was practically over, the go-to man was the 22-year-old Toronto native.

Was there a sophomore jinx? Absolutely not.

Despite his goal total cut in half, his point production was just two points off his rookie campaign and he spent nearly a combined two full games on the ice longer than his blue line partner Josh Gorges. His lone missed game was an unexplainable benching by interim coach Randy Cunneyworth, that the Habs wound up losing to the Winnipeg Jets (coincidentally the only game this year where the Habs didn't trounce the Jets).

His average 24:18 per game on the ice last season was just over two minutes more than in 2010-11, and good for 18th among NHL defensemen. For his age it is rather good company, considering just five other NHL rearguards, with three or fewer full seasons under their belt, saw more ice time than Subban. Breaking it down, 2:36 of his per game ice time came on the penalty kill and another 3:29 came with the man advantage.

Subban was among a group of gems drafted by the Canadiens in 2007, with Max Pacioretty and now New York Rangers defenseman Ryan McDonagh drafted ahead of him.

The Habs could have easily missed out on him. Just imagine if the Los Angeles Kings (not that they needed it) had made a different choice with the No. 4 pick that year, rather than taking Thomas Hickey, or how much further ahead the Edmonton Oilers would have been if they took Subban over Alex Plante at No. 15.

To close out this year's Top 25, we will have input from a few of our EOTP contributors, giving a complete picture of the new Number One.

Voting was almost unanimous for the top spot. Justin Dahan was the lone panelist not to give Subban a top vote, though the did give him a second place finish.

Those familiar with Chris Boucher's statistical breakdown can take a gander at this compilation he provided. It clearly demonstrates how important Subban's play was, in several key areas, notably among Canadiens defensemen. 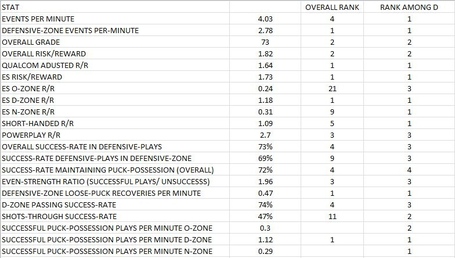 Andrew Berkshire did some research into No. 76's performance as well. We're getting a bit of a sneak peak here, as we'll be seeing these graphics in the coming days.

Andrew explains what we are looking at in better detail:

Because we're dealing with proxies, there are variables left out, such as how much ice time Subban was playing (more and more as the games go on), and how badly Randy Cunneyworth's system hurt Subban's possession numbers, among others. However what we have is a simple and clear graph showing that Subban consistently outperforms his role, something Olivier Bouchard has noted is a good indicator of success.

Strengths: Subban has a booming slap shot that he gets to the net often. Even when it's stopped, the velocity he gets on the puck creates chances for his teammates. But he is not a one dimensional player in the offensive zone, as the young defenseman has good vision and is adept at deciding whether to pass, shoot or make a deke. Chris Boucher points out that Subban's choice to deke was double that of any other blueliner. His preference was to pass in 2011-12, doing that 49 percent of the time in the offensive end. Subban still managed 205 shots on goal, fourth on the team. That combination of numbers demonstrates how strong his possession dominance was from an offensive point of view.

But to get to the offensive end, Subban usually starts at the other end of the rink, where he is highly efficient with the first pass. He was fourth in team pass completion percentage, but realize that he had a much larger total of pass attempts than any other Canadiens defender, and that Markov's numbers came off a small sample last season.

If he can't pass it, Subban has no issue bringing the puck out himself. He is very difficult to get off the puck, once his momentum starts, and often uses his strong body as a shield against forecheckers to carry it out, sometimes with one hand.

Perhaps Subban's greatest strength is that he has great hockey sense. This combined with his foot speed and strength allows him to take risks that other defenders wouldn't even consider, because he can recover from mistakes rather easily. Over the last two years we've seen Subban anticipate plays on 2-on-1 plays against and make perfect reads to break them up constantly. His timing with stick checking also went from good to great while he was partnered with Hal Gill in 2010-11.

Weaknesses: Nothing major to be worried about overall, but there are still a couple glitches in Subban's game that we saw in last year's analysis. Typically it falls into the whole risk reward category. He still tends to go for the big hit, which can take him out of the play, but has been more decisive in that area.

Subban will take risks offensively, especially if he chooses to go in alone, that can be uneventful or produce a turnover. The former of those two arguments can be attested to little support from all but a handful of his forwards last season and reflected on his overall scoring numbers.

Mixing his shot selection up may be worth looking at too. He relied completely on his slap shot with the man advantage, which is to be expected in that situation. Given his wrist shot is highly effective, and often underrated, he might want to try slipping a few of those in now and then to make defenders guess a little more.

Discipline wise, he still takes foolish penalties out of aggravation and agitation.. His PIM numbers were similar to 2010-11, and his overall penalties taken to those drawn, over 60 minutes, was relatively the same. He's still a kid though, so the maturity curve should balance that out to the more favourable side as the years go on.

Projection: Well he's established himself as a top 2 defender, that we can agree upon wholeheartedley. Now we will see if he can get to a more elite level. Subban will be in his third full season with the Canadiens, and that year seems to be the breakout season for the majority of defensemen in the NHL.

For comparison, I put up Subban's numbers to that of a few notables in their first three full seasons (min 50 games).

Stephan Cooper also did some more advanced analysis of Subban back in August, putting him fourth among his peers, comparing him to those drafted from 2007 onward.

He's already padded on an extra 14 pounds of muscle in the off-season, so we can expect his performance at both ends to do nothing but continue to improve. A Norris Trophy is within his reach in his future.

But the big question is now, "How long and how much?" Still a Restricted Free Agent, and with the lockout looming, we still have to wait and see how many years P.K. Subban will be locked up for in Le Tricolore. We know that he loves the City of Montreal and playing for the Canadiens, and the fans who come back will be happy to see him there for a long, long time.