Greg Pateryn uses his physicality and positioning to frustrate opposing forwards and stifle their offense. Can he go beyond the projections and make the big leagues?

What most Montreal Canadiens fans know about Greg Pateryn is that he's all we have left from the deal that sent the extraordinarily underrated Mikhail Grabovski to the Toronto Maple Leafs.

They also know that he spend four seasons playing for the University of Michigan Wolverines, and that most impact players who make the NHL out of the NCAA don't play four years. So Pateryn is unlikely to be a game breaker.

Pateryn's dedication to becoming a pro hockey player has also been questioned at times because of his insistence to finish his schooling. Many were upset that he refused to sign a pro contract after his NCAA season ended to join the Hamilton Bulldogs for the remainder of their season, choosing instead to focus on his final exams at the University of Michigan.

Here's an interview with Pateryn through the CCHA:

20 Questions with Greg Pateryn (via cchaproductions)

However this criticism is unfair. With the level of player that Pateryn is, it makes sense to have a back up plan if pro hockey doesn't work out. He was just being smart. And the margin for success for Pateryn is razor thin. 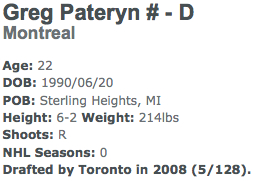 Pateryn is the seventh highest ranked player to not receive votes from every panelist, but he had a couple champions in his corner that bumped him way up the list.

STRENGTHS: At 6'3" and 214 lbs, Pateryn was an imposing figure in the NCAA, regularly defending against the best and strongest forwards in college hockey. Pateryn plays a physical style and is very effective defensively. His positioning was solid for the level of hockey he played, but since he stayed for the full for years it's tough to evaluate how he'll transition into the professional leagues. Pateryn has been noted as a strong leader in the room who plays and practices hard, and seems to have been a good influence on his younger defense partner, and fellow Habs prospect Mac Bennett.

As an example of what Pateryn can do, here is perhaps his best game of Michigan:

WEAKNESSES: Pateryn is by no means an offensive defenseman. Michigan wasn't a great offensive team during his tenure, but even so, his best offensive year is about half of what Mike Komisarek put up in his second NCAA year, also with the Wolverines. This is why I mentioned Pateryn's chances of being a success being so thin. Without any offense to cover for mistakes, and without the same size advantage in the pros that he has in the NCAA, Pateryn needs to play excellent D as well as become an adept penalty killer in order to carve out an NHL career.

PROJECTION: Pateryn faces a tough challenge this year as he goes from a top dog in the NCAA to just being the oldest rookie on the extremely young Hamilton Bulldogs defense core. His leadership will likely be counted on to keep those guys in check. The trouble for Pateryn is that there are so many younger defensemen in the Canadiens system that are poised to overtake him that he may never get his shot. And even if there is an injury to the Habs D this season, Frederic St-Denis has earned the right to be the first call up with solid play. Pateryn needs to make an impression this season, and even if he does he's likely limited to a ceiling of the 6th or 7th defenseman on the depth chart.