Injuries put a dent in the development curve of Steve Quailer, but after 4 seasons in the NCAA he seems to be ready to make the jump to the pros. Can the budding power forward make good?

"I'm a power forward and I know that the organization needs a player who is a big rig." - Steve Quailer, La Presse - June 2012

Hamilton Bulldogs followers will get the first opportunity to see what Steve Quailer can bring to the Montreal Canadiens organization in 2012-13. The 6'4" forward (drafted in the 3rd Round in 2008) signed a two-year deal with the Habs during the team's June development camp, passing on a final season with the Northeastern Huskies(NCAA/HockeyEast).

This past season he racked up 25 points in 26 games, missing a month due to torn knee ligaments. His performance still was enough to be named the team's MVP and he had a ten-game point streak (15 points) early in the season. His detailed NCAA breakdown can be read here. 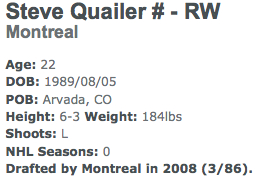 Had Quailer never suffered such serious injuries, who knows where he would rank on this list, but his combination of size and skill finally on full display for a year has resulted in him jumping up in several panelists' rankings.

STRENGTHS: Per Hockey's Future, Quailer has good hands, a strong skating stride and is well-balanced on his skates. The typical power forward, he protects the puck well and wins battles for possession, notably in the offensive zone.

In a December 2011 interview with La Presse, Northeastern coach Jim Magidan noted that Quailer, "is already very effective in all three areas, which is rare at our level. This is a really complete player."

Quailer also exemplifies leadership, according to Magidan, and his absence on the team can be demonstrated by their won-loss record last season. The Huskies missed the playoffs, and were 1-4-3 with him out of the lineup. They were .500 with him in the lineup and 11-4-2 when he registered a point.

The Colorado native has been effective on both the power play (4G, 3A last season) and on the penalty kill at the collegiate level. Further development in Hamilton can only improve these aspects.

WEAKNESSES: Just now well can that knee hold up? It will be a test to see how Quailer's now twice injured knee holds up under a more rigorous AHL schedule. He admitted, during the Canadiens' development camp, that his last knee problem could have been avoided, had he kept his brace on.

He's not afraid to shoot, as his 78 shots in 26 games indicates,but his overall shooting percentage was just over 10 percent (17.4 with the man advantage). Shot selection may be something to work on in the AHL

Losing a full season at the NCAA level could impede his development. He'll need to show that last season's offensive numbers were not just a fluke and bulking up on his 6'4" frame will be another priority in Hamilton.

PROJECTION: With a lot of depth ahead of him in the organization, Steve Quailer will have to battle for a spot at the NHL level. He's ranked 5th among right wing prospects by Hockey's Future, and is seen as a Max Pacioretty type player Qualler is flt by many to be an ideal 3rd line NHL player, capable of bringing a dozen goals to the offense. 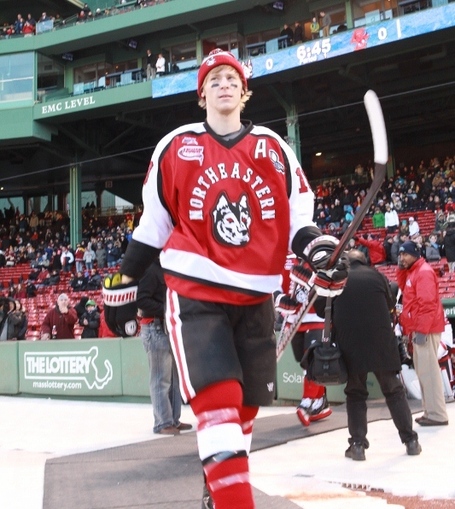