Brendan Gallagher may be small in stature, but he's climbing prospect rankings across the league at an incredible pace. He's now up to #7 on our Top 25 Canadiens Under 25.

Share All sharing options for: Top 25 Under 25: #7 Brendan Gallagher

The smallest player on this list continues to be one of the biggest risers. With each passing year, Trevor Timmins' calculated 5th round gamble on a high scoring, diminutive WHL winger looks better and better. Statistically, it's easy to see why we're bordering on bullish on Brendan Gallagher's professional prospects. Amongst NHL drafted players, Gallagher was 7th in the WHL in points per game with 1.48 (Patrick Holland was 6th), and even better when it was limited to goal-scoring ability at 0.77 goals per game (3rd). Only Emerson Etem and Ty Rattie scored more frequently in the WHL last year amongst NHL prospects, and considering Rattie was converting a lot of Sven Bärtschi passes for goals on a stacked Portland team, one can be forgiven for giving Gallagher a bit of an added boost on that front (though Rattie is a year younger).

Gallagher has done everything that has been asked of him since being drafted and is the cream of the Habs' 2010 draft class heading into their first professional season. He challenged for a roster spot in the 2011 Canadiens training camp, and did very well at the World Junior Championships in which Canada took home the bronze, netting six points in six games. Everywhere he played, he was one of the best of his peers. And that is why the man has climbed from 24th in 2010 as an intirguing recent draft pick, to 14th last year with an added year of dominance, to 7th this season. Depending on what position you classify Louis Leblanc as, Gallagher is now the highest ranked right wing prospect in the system. 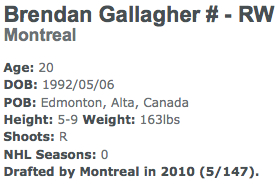 Gallagher is our first unanimous top 10 selection on the list, even picking up a 4th place vote from Kevin van Steendelaar, which was balanced out by Christopher Ive's 10th place vote.

That's a pretty overwhelming vote of confidence from our diverse panel.

From both a scouting and statistical point of view, Gallagher has made improvements to his game each season since being drafted. His skating was viewed as a weakness in his draft year, and while he's no speedster, he moves quite well now at 20 compared to at 18. This newfound quickness was put on full display during the 2011 NHL pre-season as well as the World Juniors, where he looked to be at least average if not above at both events. This speed allows the winger to remain elusive to bigger defenders both when he has the puck and when he's trying to find an open area off the puck to create chances for his teammates.

But Gallagher's main weapon is his shot, which has been terrorizing the junior ranks for the past three years. He has a strong wrist shot and can score goals from a distance, but he also has a knack for crashing the goal crease and potting the dirty goals. He's unafraid to battle for pucks in the slot and behind the goal, and plays as complete a game as one could ask for a goal-scoring teenager. A lot of people seem him as the heir apparent to Brian Gionta in the Habs system, and that comparison is both stereotypical given his size and goal-scoring ability but also highly appropriate. Gallagher is a team leader that has been one of the most utilized forwards in the WHL and was also used in all situations for Team Canada at the U20 World Junior Championships.

The only notable weakness is his size. He's small and a bit slight, and will have to show he can handle the stronger and faster competition ahead of him in the professional ranks. Aside from the obvious one, he's not an elite puckhandler and has to rely on his off the puck smarts and teammates to create a lot of his scoring chances. Corey Pronman feels that his lack of elite tools could limit his effectiveness in the big leagues, not compensating enough for his lack of stature.

The Habs' depth at right wing is strong enough to keep Gallagher out of the NHL for the start of 2012-13, but at this point in his career it is within the realm of possibility that he forces his way into the lineup at some point this coming season. I'm looking for Gallagher to have a very strong rookie AHL season for the Bulldogs, being a top 3 scorer on the team and amongst the top scoring rookies in the league as a whole. In the long run, I really believe Gallagher possesses legitimate top six ability, and could even push higher if he can continue to improve his skating and playmaking abilities. His work ethic is tremendous, and in a year's time I could see Gallagher pushing into the top five on this list. It's incredibly impressive that in a strong group of 20 year olds, Gallagher, a fifth round draft pick, is viewed by this panel as the best of the bunch.

You want a shift and goal that sums up Gallagher better than anything? Check out the domination and determination on this one: