Now 22 years old, American winger Danny Kristo has been making Canadiens fans wait for a closer look quite a while now. Will the wait be worth it?

Will the wait be worth it for Danny Kristo? That's the question most Canadiens fans have to ask when considering the future of the American right winger as he enters his senior season with the University of North Dakota Sioux.

Staying at the collegiate level for one more season is a bit frustrating from a fan's perspective. It means he's less visible and spending one more year at a level we already know he is tremendously successful in. It also puts him behind the current crop of graduating major junior wingers, who will all have one year of professional experience more than Kristo by year's end. He's ready for a new step from a hockey perspective, but seems driven by the desire to complete his schooling and compete for a national title. While those are honourable pursuits, from a pure hockey skills development perspective, staying doesn't seem to make a lot of sense.

Kristo has slowly slipped down the rankings each year we've done this ranking. That's probably reading too much into it, as we for some reason ranked him ahead of Max Pacioretty in 2010 and have added top prospects in Nathan Beaulieu and Alex Galchenyuk in the meantime (all were first round picks). In fact, of the players who have moved ahead of Kristo, only one player was not a first round draft pick. Kristo's talent level keeps him high on our minds going forward, but without seeing him advance in competition we're left with judging him based on slight increases in his counting stats, scouting reports from bloggers and the occasional televised NCAA game in Canada (none of us writers live in a college hockey market, so seeing him in person is very difficult). For those reasons more than any other, Kristo has dropped from 6th in 2010, and 7th in 2011, to 9th this year. Kristo's ranking is an indication that the young talent in the organization has been slowly rebuilt since the great purge of 2009-10. 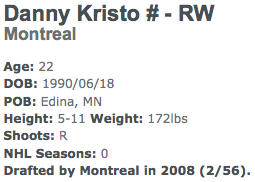 Of course, that's the consensus ranking. In reality, there were a number of individual lists that saw Kristo fall behind other players.

Chris Boyle and Justin Dahan are modest outliers placing him 7th and 13th respectively, but from now on you'll start to see a much more compact range in the rankings as we deal with the clear elite of the player pool. Still, four out of ten voters felt strong enough about other players to drop Kristo out of the top ten, which is pretty notable for a long time highly touted prospect. (Side note: last year's biggest Kristo booster was Chris Topham, who couldn't participate in this year's panel, which also had an effect on his ranking).

You can tell statistically why Kristo was so popular in 2010, his NCAA and WJC totals were both fantastic. Since then, he had a down year with some off-ice issues in 2011 and then this year he rebounded to finally improve on his 2010 totals. Like I said, I think the drop in stature is more for what others have done than what Kristo has, but I think a case can be made that the two spot drop is at least a tad unfair.

Kristo is a dangler, which helps separate him from his Canadiens peers in terms of skillset. Like his NHL star doppelgänger, Ales Hemsky, he can use his stickhandling skills from the wing to create open space and make plays. He's made many a WCHA defenceman look silly as he made a quick deke around them that gives him a straight path to the net. His second most important skill is his speed. On the bigger NCAA ice surfaces, he seems in his element, coming from trickier angles to create turnovers off the forecheck while the defenders are looking well to far up the ice to make a play.

His passing is noted as one of the major improvements in his game in recent years by Corey Pronman of ESPN/Puck Prospectus, an important skill set that may have improved by spending time on the point of North Dakota's PP unit. His right hand shot sees him play a quite active role on the PP in general, moving as far as the left hashmarks and even the goal line from starting on the right point on set faceoff plays.

It's an issue that we keep pointing out year after year, but Kristo's size and strength will always be of concern, and something that we can't really put to the test until he turns professional. Strength is something he has worked on, and he has put on some additional upper body muscle, but he is naturally slight. Players of his body type have shown success in the NHL, so while it's a concern it's not one that will necessarily hold him back.

Most weaknesses in his game can't really be worked on too effectively at the NCAA level anymore. His ability to play in all-situations has improved with each year in the league, but the competition level is seemingly too easy for him at this point to learn a lot more. Thankfully he plays in a very tough conference, so there are players that do challenge him, but they are fewer and fewer with each year.

Hey, there's only one logical step up for Kristo this year, and that's to be a part of the Hobey Baker conversation while being a team leader. He's a senior and he's been designated one of the Sioux' assistant captains for next year, and North Dakota looks to have a strong team around him. He'll be relied on to help lead the offence of one of the nation's best teams, and the potential exists for Kristo to be one of the best all-round players as well in 2012-13. His goals for this next year seem more team orientated, and judging by this interview (below), he has a lot of faith in the coaching staff to help him personally improve as well.

When the season ends, he could immediately join the professional ranks either in the AHL or straight to the NHL. Some fans thought his decision to stay in the NCAA this next year made him less likely to sign with the Canadiens, but it actually should help him... if he wanted to become a UFA, he couldn't sign with a different NHL team until August 15 of next year. The Canadiens, barring a trade, are the only team that could put him in the pros next year.

And if player interviews bore you, here's a MONTAGE of Kristo highlights: