Sebastian Collberg is the Habs first 2nd round pick since Danny Kristo in 2008, and he cracks the top 10 immediately.

Share All sharing options for: Top 25 Under 25: #10 Sebastian Collberg

As we've noted a few times in this season's series, the rapid falling of Alexander Avtsin's stock has taught the panel a harsh lesson with prospects, talent does not equal results. Avtsin has all the physical tools you want in a hockey player, but there's a reason why he was drafted in the fifth round, there is usually a reason why players fall.

This has lead to the extremely highly touted Montreal Canadiens draft in 2012 yielding only a few prospects in this year's top 25. This is likely to change in the coming years as they progress, but there was more caution than previous years.

All that said, Collberg is not like Alexander Avtsin, in fact he's kind of the complete opposite as far as pedigree goes. Avtsin was playing in a weak league and blitzed his peers with gaudy numbers, while Collberg played in one of the best hockey leagues in the world in limited minutes and couldn't manage to score. 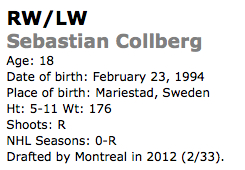 Outside of Kevin, who didn't rank Collberg at all, there wasn't much separation in the voting for Collberg.

STRENGTHS: As noted by Corey Pronman in his explanations for his top 100 prospects list, Collberg was a top scorer in the Swedish under 20 league as a 16 year old, which got him the promotion to the Elitserien. He's a dynamic offensive player with elite skating ability, which compensates for his small frame by making him hard to check. Think like how Patrick Kane goes to the dirty areas and somehow rarely gets checked.

Collberg is a shooter, not a playmaker. His shot is heavy, and his release quick. The descriptions of how he scores from a distance often bring Max Pacioretty to mind, and if that's the kind of shot Collberg has, Timmins has made a great pick. Speed, agility, acceleration and an excellent shot is what to look for in Sebastian Collberg.

WEAKNESSES: Collberg's biggest disadvantage is obviously his size. He's not small like Brendan Gallagher or Brian Gionta, but he is slight. It's something to expect with a young player like him though, and he will get stronger with age. Slight as he may be however, he's not hesitant to go to the tough areas and battle for ugly goals.

The only other major weakness I can find in Collberg's game is that his playmaking and on ice vision don't match his scoring and skating ability. However if it did, in all likelihood he would have been off the board by the time the Canadiens could pick him. You usually don't get total packages in the second round, but Collberg has extremely high upside and could come along quick if he's put in the right situation.

PROJECTION: Collberg will be back with Frolunda in the Elitserien this upcoming season, and he's been on the 4th line for them in some exhibition games already this year. Obviously for a player like Collberg, the 4th line isn't an ideal place for him, so we have to hope he works his way up the lineup during the season and Frolunda promotes him. Playing in a pro league at 17 is very impressive, so sticking there at 18 and beginning to produce a bit should be expected. Big offensive numbers shouldn't be something to worry about just yet for Collberg however, his adjustment to that league may take awhile longer, and playing there could produce an NHL ready winger by the time he hits 20. Collberg has a very high ceiling, Pronman for example ranked him above Nathan Beaulieu, who is highly touted as well. It's possible Collberg could reach as high as 1st line winger status.