Turning 23 this September, he gets one and possibly two more chances at redemption in our future polls. The Michigan native signed a one-year, two-way deal in July with the Canadiens and becomes a Restricted Free Agent (RFA) following the 2012-13 season.

Palushaj was the franchise's air miles winner, almost getting called up and sent down as an injury replacement on a regular basis. He scored his first career NHL goal, and added four assists in 38 games with the big club. He registered 35 points (15 goals) in 35 games with the Hamilton Bulldogs, good enough for third in team scoring.

He's guaranteed to play this season with his contract, so barring a lockout it's just a matter of deciding where he starts things off this season.

The general consensus for the EOTP panel put Palushaj in and around the high teens, while I gave him a generous 7th place position, primarily based that he has had NHL experience and remained an offensive threat in Hamilton. Bruce had him in the 12 hole, while Robert Rice feels Palushaj has past his prime in the talent pool. 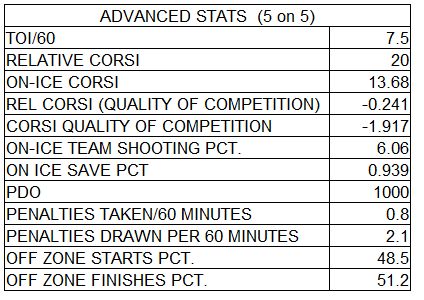 Strengths: His skating speed has improved over the last two seasons, and his decision making skills and worth ethic are clearly there. Palushaj was also rather capable last season of drawing in penalties, with just over two for every 60 minutes he played.

It would be interesting to see how he performs with an ideal pair of linemates. Could he possibly play with Tomas Plekanec on a top-six line? Chris Boucher seems to think so, noting his high risk/reward numbers in the offensive zone.

Palushaj managed to get 36 shots on goal, and had 14 that missed the net or were blocked, in an average of seven and a half minutes of ice time per game, so his ability to get pucks towards the goal is not a concern. It could be worth giving him some opportunity on the power play.

Weaknesses: As mentioned last year, while Palushaj is aggressive to battle for the puck, his size often finds him on the losing ends of the battles. There appears to be showing signs of improvement. In Chris' forechecking analysis, where Palushaj had one of the lowest rankings among Canadiens forwards, but was among the leaders in defensive zone ratios. We're only looking at 35 games, so it would be interesting to get a full season glimpse, if he can secure a spot during training camp.

Projection: A career in the NHL seems near certain for Aaron Palushaj, the question is where and how often he gets to play. He has the potential as a depth forward, providing some offensive punch and possibly getting second wave power play time. Whether he can get to a regular top-six level in Montreal, seems less likely to happen, realistically.

Palushaj will also have some strong competition with the other young bloods coming into the Canadiens/Bulldogs fold this season, which should be a motivator that sees him bring his game up a level.