Dalton Thrower, fresh off being drafted 51st overall in 2012, makes his debut on EOTP's Top 25 Under 25 at #16. The tough, all-round defender has a lot to like about his game, but might be too aggressive.

And here comes part 2 in the "Bruce Peter covers players from both his favourite hockey teams" segment. With the 51st pick overall in the 2012 NHL Entry Draft, the Canadiens selected a guy who many had as a late first round pick in mock drafts in two-way defender Dalton Thrower. Thrower, possessing one of the finest names in the entire draft class, shot up the rankings this year with an offensive explosion to go with a 'plays above his weight class' style of rugged, aggressive, good 'ole western-boy defense.

Unlike a lot of draft selections from the junior ranks, Thrower is already a veteran of major junior hockey. 2011-12 was his third year in the league, making the Saskatoon Blades out of training camp in 2009-10 before he had turned 16 years old. 211 WHL regular season and playoff games later, he's now entering possibly his final WHL season in which he'll be asked to play on a top defensive pairing for the Memorial Cup hosts. And now he's got the fanbase of the Montreal Canadiens keeping an eye on his progress as well. 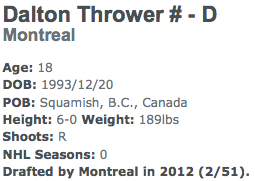 The panel continued to be divisive on Thrower, a fresh face from the 2012 Draft class, but there seemed to be more of a consensus forming around this pick than other ones:

A second round draft pick generally has a lot of positives to his name coming out of his draft year, though a couple of our panelists are still quite conservative with the 18 year olds compared to the rest. In general, though, it's quite a strong vote of confidence for Thrower from the panel as a whole.

Thrower was probably the top skating defenseman on the Saskatoon Blades last year, as well as their most fearless and reliable overall. His skating ability isn't in the high end category, but is above average overall and he only seems to struggle against the elite skaters. His point shot is very hard and in 2011-12 seemed to find it's way on goal a lot more than previously. He's the point man on the Blades' PP and can unleash a powerful one-timer. In his own end, he's an effective puck-clearer and is a very strong checker, both with his body and his stick. His own-zone positioning is improving, but he was still a bit reliant on Duncan Siemens, his defence partner, in that respect.

Thrower receives high marks for his toughness, displayed in both his on-ice pugilistic efforts and his off-ice work ethic and character. His mother is a cancer survivor, and his father is currently fighting cancer as well, something he's had to contend with off the ice while trying to improve as a player on it. When asked about his father at the NHL Entry Draft, Thrower faced the media throng with great admiration and hope (via Neate Sager of Yahoo!):

Thrower's guard dropped when asked about his father. Murray Thrower is still receiving chemotherapy in pill form. But he's leading a regular life and was in the stands to see his oldest son get drafted by an Original Six team.

"He's a lot better, he's getting a lot better," Dalton Thrower said. "He's back at work. He's still doing chemotherapy. He's looking good and I'm very grateful to have both my parents.

"I've had to grow up fast," he added. "I have two younger siblings. It's brought us closer as a family."

He was easily the most improved player on the Blades' roster in 2011-12, and he seems likely to be one of the best defencemen overall in the WHL for 2012-13. As for that on-ice toughness, Thrower regularly throws big hits, often in open ice, and has had to respond more than a few times. He famously fought Capitals first rounder Tom Wilson in the CHL Top Prospects game despite a notable size disadvantage. But don't call Thrower small (via New England Hockey Journal):

"I don't consider myself 'small' at all," he said. "I'm 6-feet and can throw my body around effectively, even if a guy has four inches on me. I've always heard people say that about me, though, and I've just gone out to show that I can go up against any big guy."

The aspect of his game that impressed me the most in 2011-12 was his creativity and offensive smarts. While he possesses a big point shot, he often got his points through simple wrist shots, drawing coverage to him and then finding an open man, and using his teammates properly. He's a very smart player.

Well, he might not like to hear this, but his biggest weakness might be that recklessness that he plays with. The Habs have an excellent young defenceman on their main roster who is similarly exuberant, but is more adept at picking his spots physically. Dalton Thrower would be well advised not to be so willing to drop the gloves. He fought 9 times in 2011-12 (plus one in the Top Prospects game) and 22 times in his WHL career to date. He's a very good fighter but I'm worried that for such an important and skilled player it could definitely end up hurting him as he tries to establish himself as a professional player. This is one of the hardest things to change about a player barring an injury scare, since teammates, fans and coaches alike are generally appreciative of guys like Thrower defending their teammates or their own actions.

While I criticized Dietz for his spike in penalties, I can't say exactly the same for Thrower, as his PIM total only jumped 12 and two of those were added fighting majors, all while playing way more minutes in 2011-12 than the previous year. Still, it'd be nice to see Thrower on the ice more often, and I'm quite confident he can do this in 2012-13 while maintaining his physical edge.

Thrower's defensive reads are probably the area most in need of improvement, as he tends to be over-aggressive in puck pursuit. In general, though, Thrower does so much well or good enough that he makes up for his mistakes.

I think Thrower can be a dominant defenceman at the major junior level next season. He will be deployed in every situation, will be paired with a high-quality partner that will also be 19 years old, and should only improve with the lessons learned from attending the Canadiens evaluation camps. He faces a tough battle with a lot of high-quality right-handed defencemen in the Canadiens system, but should be able to work his way into the AHL for 2013-14 to begin his professional career.

Thrower could very well be the Saskatoon Blades' MVP during their Memorial Cup hosting season. Getting him at 51st overall could prove a huge steal in the long run.