Tim Bozon, a native of France, put up a point per game in his rookie WHL season while adjusting to the North American game. Where can he go from there?

With their 3rd round pick of 2012, the Habs went for a francophone CHLer with the pedigree of being the scion of his country's top player. Just he's from France/Switzerland rather than Quebec and the pedigree is from Phillipe Bozon, the best NHL skater ever produced by the nation of France.

The left wing adds to the plethora of players from that position taken by the Habs in the 2012 draft (Collberg, Bozon and Hudon, plus Galchenyuk plays there when not at center), rebuilding the depth chart at a position that has become awfully thin in the organization behind star winger Max Pacioretty both in the NHL and prospect system.

As a group, the EOTP staff was very pleased to see the Habs manage to pick up Bozon in the third round. When we were looking at players for the SBNation mock draft he was on our radar for the 33rd overall pick and would have been very pleased to select him at 51. Getting him after other well regarded prospects in Collberg and Thrower was like Christmas coming twice to us.

Bozon was one of the top scoring forwards from the CHL available in this draft, normally the safest and most successful type of player to take in the amateur draft. His 71 points in 71 games is a total normally good for a late 1st round to 2nd round pick in most drafts and this was a weak year for scoring forwards where he was 8th in forward NHLE (not including overagers). Add in that he has no obvious glaring flaws as a player to cause such a fall and this looks even better. Getting him in the 3rd round when most mock drafts had him in the top 50 looks very good to us. 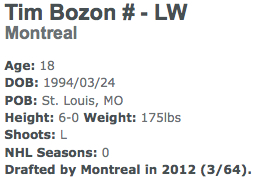 The panel voted as follows:

Andrew and Bruce were the big believers in Bozon while most of the rest were more conservative. Bozon was relatively low for me, which reflects my methodology of usually keeping non-first round picks from the most recent draft low due to the high degree of uncertainty in 18 year old players and the distance they have from the NHL. Bozon ranked only a little higher than Hudon in my book for example. I fully expect both of them to rise in the chart with time though.

Good at everything, great at nothing. That's what every scouting report I've ever read on Tim Bozon boiled down too. He's got good size for a forward, but isn't huge. Both a shooter and a playmaker, pretty good defensively but not a two-way stalwart and will hit you but isn't a bruiser. Basically no real weaknesses except the lack of a dominant skill. The most interesting thing said about him on the ice is that he's a total pest that gets in your face and a polyglottic chirper.

Using our normal NHLE system we project Bozon as currently a 12.3 goal and 22.8 points per 82 games NHL scorer on a year where he started at 17.42 years of age. This puts his most comparable recent Habs prospect at his age to be Louis Leblanc.

As a mid level prospect, Bozon’s lack of a stand out skill could keep him out of the NHL. Depth players usually have some particular talent that leverages them out of the minors and into the big league. Bozon probably only makes the team if he is legitimately one of the organizations best 9 forwards or 6 wingers to earn a top nine job. That’s one thing for a bluechipper that should easily make it there on talent and potential, it’s another for a mid-lister. Still, that might be better than having a crippling deficiency in his game.

Bozon looks to report again to Kamloops next year to play a bigger role as an 18 year old. He’ll likely stay there for the next two years before turning pro, with sojourns to be the best player for the French World Under 20’s team.

If Bozon developes well expect him to follow Brendan Gallagher’s root of progressively getting better at the junior level and making the jump to the professional game at 20 years old, with the expectation of a certain amount of AHL time before earning an NHL spot. I wouldn’t expect him to play regularly in the NHL for at least another 4 years. A good result would be if he turns into a 2nd/3rd line LW in the NHL.

I looked for recent 17 year old prospect comparables who were approximately a point per game in their 17 year old junior season, basically equal on goals and assists, of about average size and playing left or right wing and drafted between 25-70th overall playing in the CHL:

So we get a number of well regarded current prospects, a couple NHL players a few of which were top niners, a number of total busts and the best player being a bonafide top six winger in Brandon Dubinsky. Basically, your batting about average for a late second round pick with that kind of player.