At #19 Patrick Holland was a point machine for the Tri City Americans last year, but was that due to him or his overager linemates?

Share All sharing options for: Top 25 Under 25: #19 Patrick Holland

Patrick Holland is probably the most difficult prospect in the Canadiens system to assess. Acquired in the deal that sent Mike Cammalleri to Calgary for Rene Bourque, along with a second round pick, there's a bit of pressure on Holland to give fans some hope of that deal working out, since Bourque did his best to make it look awful last season.

Looking at raw numbers, Holland had a breakout season at 19/20 and was one of the most dynamic players in the WHL. Looking a little bit closer, well Holland was on a line with two overage WHL scoring machines in Tri City, as Brendan Shinnimin lead the WHL in scoring and took home the Four Broncos Memorial Trophy for the WHL's player of the year, and Adam Hughesman wasn't far behind.

Holland's linemates both produced over 50 goals to his 25, and his 109 points is nearly double his total of 62 from the season before. So how much of that jump in production was Holland being legitimately a better player, and how much was playing with two players who were too good for the WHL? It's tough to nail down at this point, but we should know soon if Holland is a David Desharnais or a Ben Maxwell.

Unfortunately for Holland, as a natural right winger he's going to have a very, very tough time making a name for himself this season. We'll assume that Aaron Palushaj will play on the left side in Hamilton, but even with him out of the way Holland will have to contend with Louis Leblanc, Brendan Gallagher, Steven Quailer and 3rd year disappointing but not written off Alexander Avtsin. 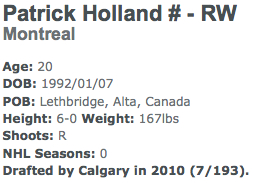 The panel was split on Holland, as we usually are. I can only explain my own vote, in that I believe Holland is too far down the depth chart at right wing to distinguish himself in Montreal.

STRENGTHS: Holland's best skill is probably his vision, as he's an excellent passer who can get the puck to his linemates when they're in scoring position. Both his linemates for the Tri City Americans were great players, but he still recorded 84 assists, which is quite a feat. Aside from that, Holland's skill set doesn't really stand out, he just does everything well, a little bit like how scouts described Louis Leblanc, although he's not near the shooter that Leblanc is. He plays a two way game and has a knack for scoring when his team needs it.

WEAKNESSES: Holland is average size at 6'0, but has been listed as low as 167 lbs. Surprisingly however, he plays a fairly gritty game and even gets into fights once in awhile, sometimes biting off more than he can chew, like this fight with Maple Leafs prospect and Matt Cooke clone Brad Ross:

The trouble with Holland isn't necessarily that he has glaring holes in his game, it's just that his strengths aren't that impressive. Pouring over scouting reports there's almost no mention of Holland's shot, and watching highlights of his goals it seems that it's decidedly average.

PROJECTION: If Holland makes the NHL, it won't be as a big scorer, but his all around game could make up for that. Corey Pronman of Hockey Prospectus has stated that he believes Holland could be an NHL regular on the 4th line, possibly a below average 3rd liner if everything breaks well for him. As I said earlier, Holland is a tough case to evaluate, but after a year in Hamilton we should have a better idea what his capabilities are.

Holland is one of the more interesting hockey players on twitter as he seems to be fairly smart and have a great sense of humour. Follow him here.