Blake Geoffrion is the NHL's first 4th generation player on a single team. Can he live up to his family's history?

Share All sharing options for: Top 25 Under 25: #20 Blake Geoffrion

Blake Geoffrion can claim one thing over his father, grandfather and great-grandfather; He’s the only family member to crack our annual Montreal Canadiens top 25 under 25 list.

Following a pair of seasons split between the Nashville Predators and the Milwaukee Admirals, the 24-year-old came to Montreal last February in a trade that sent Hal Gill to Music City.

The fourth generation player had more success offensively with the Habs and Bulldogs in 2011-12 than he was with the Preds organization. It was enough for the Canadiens to give him another year to look at him.

The question is, how far can Blake Geoffrion go with the Canadiens. Can he come anywhere close to the level of his Hall of Fame lineage, or is he a career borderline minor leaguer?

The panel's voting averages out to a 19th place position. Brian and myself had him as high as 15th, while Robert Rice didn't even have him ranked.

STRENGTHS: Geoffrion is not afraid to be a physical player at both ends of the ice, and that gets better with each game. He will battle along the boards and is certainly not afraid to go to the net.

Geoffrion's play is validated in Chris Boucher's post-season assessments. He was successful with 81% of his neutral-zone events, while in possession of the puck (2nd behind Tomas Plekanec), and 71% (4th among forwards) attempts to either maintain puck-possession, or dump the puck deep into the offensive-zone. In the defensive zone, he was just under 60%.

He also possesses above average skating speed, good vision and was seldom criticized for not giving a full effort with every shift.

WEAKNESSES: Bernie Geoffrion once said, "How can you score, if you don't shoot?' His grandson possesses a good shot, nowhere close to Boom-Boom's, however he is critiqued for not shooting enough.

When he does shoot, his choices may need better decision. In OnTheForecheck's season preview last year, all but one his shots on goal were within the circles.

He did show a spike in shots per game this past season with the Canadiens, and his shooting chart, with the Canadiens, is below based on data from NHL.com. The positions (left or right) may not be totally accurate, as the NHL site isn't always perfect, but only a handful of them fell within the traditional "scoring chance" area. 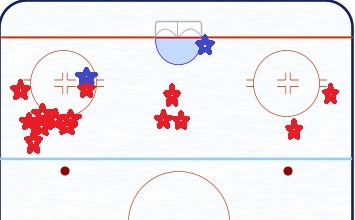 His overall offensive zone work also needs to be strengthened, reflected by his 49% rating possession rating. Keeping the puck, once attaining it at even strength, was a problem for the pedigree forward.

PROJECTION: The best thing for Blake Geoffrion this season would be a full season in the AHL. The last two years he has been called up, by both the Preds and the Habs, as an injury replacement. This has slowed his chance to develop at a consistent rate and he's already 24. His time on special teams was non-existent, getting a handful of chances under Randy Cunneyworth. Time in The Hammer will give Geoffrion the chance to work on all the aspects, at the pro level, that he really hasn't had time to do in the last two seasons.

With his age, time may not be on the side of Blake Geoffrion. Be it on the wing or at center, he has the skill sets for the NHL, but it is unlikely that he makes it past a bottom six forward in his career.