A year after being drafted, former 5th round pick Darren Dietz is starting to earn a name for himself within the Canadiens prospect pool.

There is something quite cool about your favourite NHL team drafting a player from your favourite major junior team. It makes it all the more challenging to evaluate said player fairly... A costly mistake at the major junior level might leave you doubly frustrated in the player, or a strong performance by him might make you inflate his abilities. It's a delicate line for objective analysis, but it sure makes it easy to root for the guy's success. Definitely better than an awkward moment when your favourite major junior team loses a playoff round largely based on the performance of one of your favourite NHL team's prospects playing for the bad guys. So yeah, I like that the Canadiens made Darren Dietz a fifth round pick in the 2011 Draft. I like that they doubled up on Saskatoon Blades players this past draft and picked up Dalton Thrower, too. But this is about Timmons' first Blades love, the first prospect I can recall the Habs having from the Blades (Brian Skrudland was a bit before my time).

Darren Dietz stepped up in 2011-12 with a hot start that sparked some interest from the fanbase, showing an offensive flair that wasn't widely known about his game. Throughout the year, the offensive production continued and here we are, a year after being drafted in the fifth round, putting Dietz solidly into the top 25. The Canadiens have had a good string of fifth rounders in recent years, with Brendan Gallagher, Darren Dietz and now Charles Hudon from this year's draft. Whatever Trevor Timmins' strategy is, it seems to be paying off big dividends in the fifth round for sure. 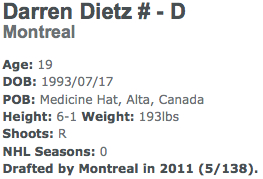 Turns out I'm not so much of a blatant homer with Dietz after all, with a pretty even consensus on Dietz aside from Chris Boucher:

Dietz received no votes a year ago, but he's basically on everyone's radar this year. Why?

Dietz got billed coming out of his draft year as a defensive defenseman, but that wasn't the same player I really was familiar with in 2010-11. I saw a young player who was a bit timid to start the year, was afraid to make mistakes, that gradually grew more comfortable with his game and take some more calculated risks as the season went on. This one game scouting report by Chris Boucher from November 2010 is indicative of that stage of Dietz's career. In 2010-11, Dietz stepping up and making a key pinch from the blueline to keep the pressure up became a more common sight after Christmas, and is really when he worked himself into the draft conversation. More than anything, it was his hockey sense that shone. His skating was decent, but it was his reads and on-ice vision that helped him become more effective and even dangerous at times. He was an offensive-minded playmaker sleuthing as a defensive stalwart.

Dietz saw his stat totals increase significantly in 2011-12, with goals going from 8 to 15, assists from 19 to 29, and PIMs going from 66 to 118. That PIM total is something he'll have to rectify, but in a 17 to 18 year old season, it can be used as a measurement into his increased minutes in total. Dietz was a huge part of the Saskatoon Blades defence last year, with the team running their 18 year old crew of Dietz, Thrower and Colorado Avalanche first rounder Duncan Siemens in all situations possible. It was an offensive growth noticeable from last year's training camp, as Blades colour commentator and popular blogger Cody Nickolett noted.

Darren also possess an aggressive side. He'll try and make big hits to break up plays around his own blueline and is known to drop the gloves on occasion, but that's not something that is out of place on the Blades as a whole. Hockey Fights lists him at 8 fighting majors last year in total, which was actually more than the bigger Siemens had (5).

The chances Dietz is currently willing to take offensively can expose his team defensively. It's possible that it is simply the role on the Blades that allows Dietz to take these risks, but it is notable that Blades Head Coach Lorne Mollekon didn't opt to keep Dietz on a pairing with Siemens for 2011-12 when constructing his team's new top pairing. That spot went to Dalton Thrower, and when Thrower was injured late in the season Dietz could not provide the same level of two-way play to play against the best players in the WHL. Dietz's lack of standout skills can itself be considered a weakness, lacking an intimidating point shot, have average size, and not being an elite skater. To make it in the pros, it'll be on the back of smart, effective playmaking.

Dietz will return to the Blades this year to help them prepare for a run at the 2013 Memorial Cup, which Saskatoon will host this coming year. There's a lot of pressure on him and the returning Siemens-Thrower pairing, who are all now in their 19 year old season and will be expected to not just carry the Blades, but dominate the opposition. Dietz will probably continue to play a bit of a freelancer role on the PP, moving throughout the offensive zone to try and exploit open passing lanes while setting up Thrower's point shot. Dietz is in a tough battle with all of the right-handed shooting defensemen in the Canadiens system, but in a lot of ways is in a similar situation to what Morgan Ellis faced heading into his 19 year old junior season (although Ellis had to be traded to the Memorial Cup hosts). Look for Dietz to play in the high-twenty minute range a night, and hopefully he'll be challenged to stay more disciplined, both in terms of keeping out of the penalty box and making better reads in his own zone.

For the variety of skills that Dietz possesses, here's a couple of YouTube clips for your enjoyment. First, a couple goals against the Regina Pats (hell yeah!):

And now Dietz taking on noted WHL pugilist Mitchell Moroz, who the Oilers drafted one spot ahead of Sebastian Collberg this past year:

I was unfortunately at that game with the Moroz fight... the WHL Champion Oil Kings ended up pasting the Blades 7-2. Grumble, grumble...